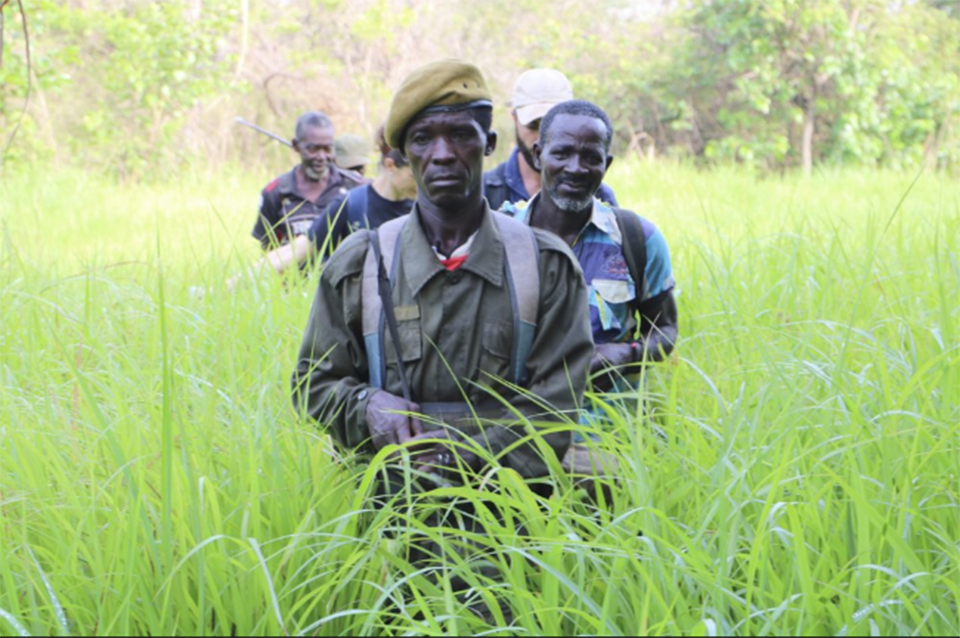 In this photo of Saturday March 16 2019, Rangers walk in a field near the Bire Kpatous game reserve along the Congolese border. South Sudan is trying to rebuild its vast national parks and game reserves following a five-year civil war that killed nearly 400,000 people. The conflict stripped the country of much wildlife but biodiversity remains rich with more than 300 mammal species, including 11 primates, but poaching is a growing threat. (AP Photo Sam Mednick)

BIRE KPATOUS GAME RESERVE, July 27: Charles Matthew secures his beret, slings a rifle over his shoulder and prepares a team for an overnight foot patrol in Bire Kpatous, one of South Sudan’s game reserves that survived the country’s civil war but are now increasingly threatened by poachers and encroaching human settlements.

Matthew, 45, said he’s proud of his work after years of being a soldier and has learned a lot about wildlife. “I didn’t even know the names of species like aardvark, pangolin, crocodile, and chimpanzee,” he said of his knowledge when he started as a ranger 14 years ago.

But he worries about the reserve: “When poachers come and are well-armed, we can’t get there in time.”

South Sudan is trying to rebuild its six national parks and 13 game reserves, which cover more than 13% of the country’s terrain, following the five-year civil war that ended last year after killing nearly 400,000 people.

The war stripped the country of much wildlife and the parks are rudimentary, lacking lodges, visitors’ centers and roads. There is no significant tourism; the parks department does not even keep statistics on the number of visitors.

“Given these challenges, the biodiversity of South Sudan is in peril,” said DeeAnn Reeder, a conservationist and professor at Bucknell University who has done research there. She called conservation efforts “significant but relatively small in scale given the vastness of the country” that still has the potential for surprise. The documentation of forest elephants in South Sudan was a “very significant find.”

That biodiversity remains rich with more than 300 mammal species, including 11 primates. The country boasts one of Africa’s greatest annual antelope migrations.

Now the biggest threat to the country’s wildlife is poaching, the scourge that afflicts parks and reserves across Africa.

Bire Kpatous, near the Congo border and a convergence point for flora and fauna from Central and East Africa, has one of the region’s “forgotten forests,” as some conservationists call them. It is home to animals such as bongo antelopes, badger bats, African golden cats, forest elephants and forest buffalos.

The spread of unlicensed firearms, however, threatens to decimate wildlife while the resources to combat it are scarce. South Sudan’s government allocated nearly $6 million for the parks and reserves last year, a figure considered woefully inadequate by some local authorities.

Western Equatoria state, where Bire Kpatous is located, has just one car for the 184 rangers overseeing three game reserves and one national park.

Some donors are stepping up. South Sudan last month received a pledge of $7.6 million from the United States Agency for International Development and another $1.5 million from the Wildlife Conservation Society to protect the parks.

Bire Kpatous is also threatened by encroaching human settlements. Residents already burn swaths of land surrounding the park to clear it for cultivation. Rangers are working to foster support for the parks among local residents, who sometimes go out on patrol with rangers.

“Whenever we patrol the forest we sleep separately. In case we’re attacked by poachers at least one person might survive,” said Masimino Pasquale, a resident working with the rangers.

Residents say they often hear gunshots in the park but are without transport to investigate, said Samuel Apollo, the community’s chief.

Another resident and wildlife advocate, Philip Michael, said he was threatened with death last year by people who blamed him for not “allowing them to kill animals.”

The Britain-based Fauna & Flora International is teaching rangers and community members how to use a GPS, set camera traps and establish sustainable practices. The group also is trying to help South Sudan develop conservation tourism as an alternative source of revenue for a country whose economy is almost entirely dependent on oil.

While progress is slow, several rangers said they are seeing more signs of animals during patrols than they did last year.

Local teacher Isaac Pisiru said he wants to organize field trips to the park so his students will learn the importance of protecting animals.

“If I don’t teach them about protecting animals, people will start destroying them,” he said. “It’s important for children to see animals physically and not just in books.”

KATHMANDU, Oct 24: Nepal has been losing a number of snow leopards mostly to poaching and retaliatory killings, according to a... Read More...

My claim for the post of General Secretary is natural: Leader Pun
23 minutes ago