US presses WTO to stop lenient trade treatment of China 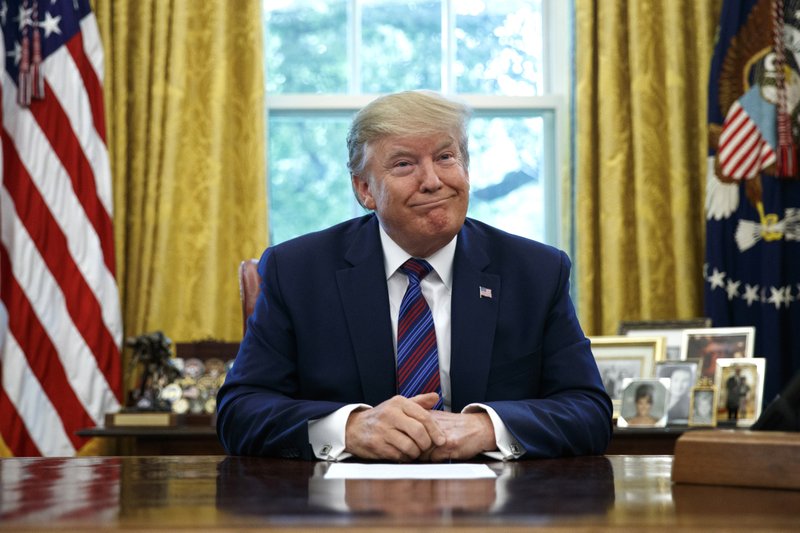 President Donald Trump pauses as he speaks in the Oval Office of the White House in Washington, Friday, July 26, 2019. Trump announced that Guatemala is signing an agreement to restrict asylum applications to the U.S. from Central America. (AP Photo/Carolyn Kaster)

In a memo, Trump directed U.S. Trade Representative Robert Lighthizer to “use all available means” to get the WTO to prevent countries from claiming developing country status if their economic strength means they don’t need beneficial treatment.

Developing countries, supposedly not yet competitive with advanced economies such as the U.S., get more time to open their economies, more leeway to subsidize their exports and procedural advantages in WTO disputes. Countries can choose their own status, and other countries can challenge them.

Trump said the designation lets powerhouse China and others take “unfair” advantage of trade rules. If the U.S. decides the WTO has not made “substantial progress’ after 90 days, it will seek unilaterally to stop treating those countries as developing economies.

In a tweet, Trump wrote that the “WTO is BROKEN when the world’s RICHEST countries claim to be developing countries to avoid WTO rules and get special treatment. NO more!!! Today I directed the U.S. Trade Representative to take action so that countries stop CHEATING the system at the expense of the USA!”

His memo also asks Lighthizer to report back to the president in 60 days.

Despite claiming developing country status, China is the world’s second-biggest economy and No. 1 exporter.

“China and too many other countries have continued to style themselves as developing countries, allowing them to enjoy the benefits that come with that status and seek weaker commitments than those made by other WTO Members,” Trump’s memo said, adding that “the status quo cannot continue.”

But former WTO official Jennifer Hillman said that she doubts Trump’s move will make much difference. Most of the more-generous deadlines developing countries got to open their economies have long since passed.

The U.S and China are locked in a trade war over American allegations that Beijing is using predatory practices, including outright cybertheft, to challenge U.S. technological dominance.

The Trump administration has complained that the Geneva-based WTO, which referees trade disputes, is ill-equipped to handle China’s unique economy in which the government plays a major role and boundaries between state-owned and private companies can be blurry.

“The WTO is in desperate need of reform,” Trump said.

Earlier this month, the administration blasted the organization for ruling that the United States had wrongly calculated the tariffs it imposed on China for unfairly subsidizing Chinese exports. The WTO decision could allow China to levy retaliatory tariffs on U.S. products.