Staffer with SC notice for CIAA chief goes out of contact 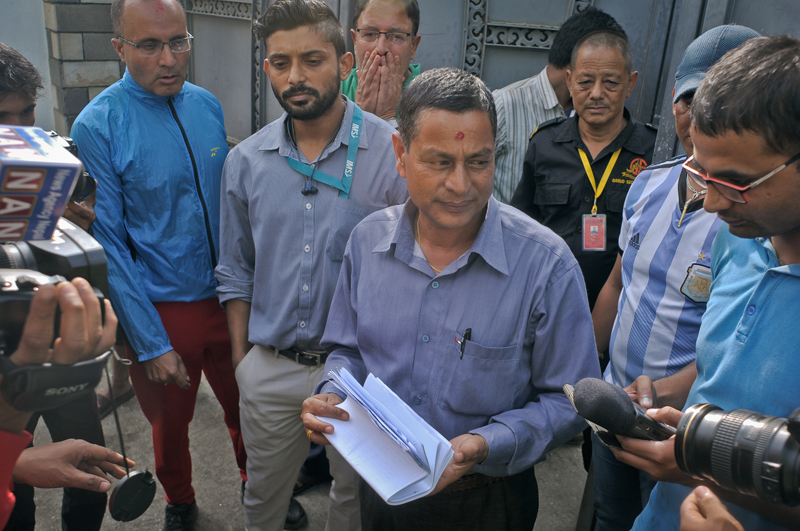 KATHMANDU, Oct 6: A staffer of the Supreme Court (SC), who was assigned to deliver the court’s notice on Lokman Singh Karki, the Chief Commissioner of the Commission for the Investigation of Abuse of Authority (CIAA), has gone out of contact.

Shambhu Khatri, a SC staffer,  who was in contact with the administration of the SC at 10 am has gone out of contact. His mobile phone is switched off.

Khatri, who was said to be on the way to office in a taxi, mysteriously went out of contact before reaching the SC.

When contacted this morning, Khatri said that he would go straight to the Office of the CIAA from his house.

When the administration of the SC called him to the office before leaving for the CIAA office, he had left for SC by a taxi.

“He was coming to office to deliver the court’s notice today. We were waiting for him. His mobile phone is switched off,” a source at the SC told Republica Online. “All the necessary official documents are with him.”

The SC staffers led by Khatri had gone to Baneshwor Height to paste the court’s notice to Karki’s house on Wednesday afternoon.

The team had returned without delivering the notice at Karki’s  house after the secretary of ward number 10 of Kathmandu Metropolitan City Sita Rai did not show up.

As per the provision laid down in the SC regulations, a site report should be prepared in the presence of ward secretary.

In the notice Karki has been mentioned as former chief secretary while the Office of the President as defendant.

As per the legal provision the court staffers can paste such notices at defendants’ address only in the presence of secretary of the village development committee or the secretary of ward office in municipalities.

The SC has scheduled the hearing on the writ petition right after the Dashain festival.

A division bench of justices Gopal Parajuli and Om Prakash Mishra had quashed both the petitions on September 24, 2014