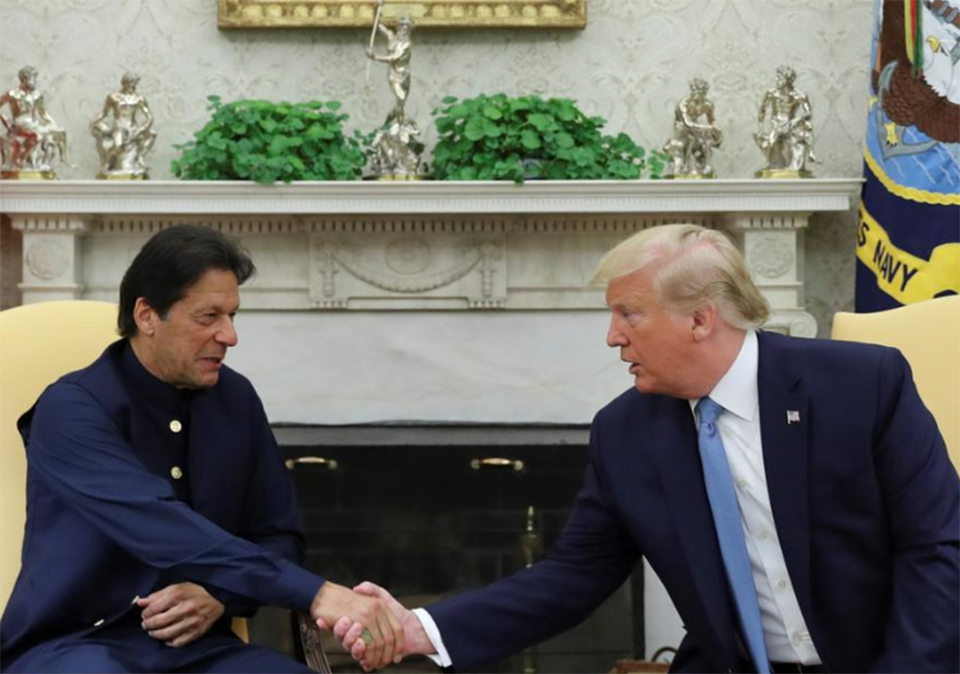 WASHINGTON, July 23: President Donald Trump voiced optimism on Monday that Pakistani Prime Minister Imran Khan could help broker a political settlement to end the nearly 18-year-old U.S. war in Afghanistan and held out the possibility of restoring aid to Islamabad.

“I think Pakistan is going to help us out to extricate ourselves,” Trump said, with Khan sitting next to him at the start of a White House meeting.

Trump spoke of possibly restoring $1.3 billion in American aid that he had cut last year, depending upon the results of the meeting, and offered to mediate in the longstanding dispute between Pakistan and India over the Kashmir region.

The United States and Pakistan have a complicated relationship. Trump last year complained on Twitter that the Pakistanis “have given us nothing but lies & deceit” and “give safe haven” to militants. Pakistan has denied the accusations.

“They were really, I think, subversive. They were going against us,” Trump said on Monday, adding that the U.S. relationship with Pakistan had improved.

Khan told Trump that a peace deal with the Taliban was closer than it had ever been.

“We hope that in the coming days we will be able to urge the Taliban to speak to the Afghan government and come to a settlement, a political solution,” Khan said in the Oval Office meeting when reporters were present.

Trump wants to wrap up U.S. military involvement in Afghanistan and sees Pakistan’s cooperation as crucial to any deal to end the war and ensure the country does not become a base for militant groups like Islamic State.

Washington wants Islamabad to pressure Afghanistan’s Taliban into a permanent ceasefire and participation in talks with the Afghan government.

U.S. special envoy Zalmay Khalilzad will travel to Afghanistan and to Qatar, where he will resume talks with the Taliban, from July 22 to Aug. 1, the State Department said.

Analysts believe Bajwa will play a key role in behind-the-scenes discussions, with the military looking to persuade Washington to restore aid and cooperation.

Authorities in Pakistan last week arrested Hafiz Saeed, the alleged mastermind of a 2008 militant attack on the Indian city of Mumbai who has been designated a terrorist by the United States and the United Nations. More than 160 people were killed in the four-day siege.

But Pakistan has not released Shakil Afridi, a jailed doctor believed to have helped the CIA track down former al Qaeda leader Osama bin Laden, whose organization was responsible for the Sept. 11, 2001, attacks on the United States that triggered the American military intervention in Afghanistan the following month. U.S. forces killed bin Laden in Pakistan in 2011.

Trump told reporters he would discuss Afridi’s case with Khan as well as other “hostages.” Khan told Trump that he had brought him “good news” on two hostages, but did not elaborate on what he meant while reporters were present.

Khan told Fox News he would be willing to consider releasing Afridi in exchange for Pakistani neuroscientist Aafia Siddiqui, who is serving an 86-year U.S. prison sentence after her 2010 conviction of shooting at FBI agents and soldiers. “So yes, we could negotiate some sort of swap,” he said.

India, which in February came close to war with Pakistan over the disputed region of Kashmir and which accuses Islamabad of supporting militants, will be watching the talks in Washington closely.

India in the past has consistently rejected outside mediation in its dispute with Pakistan over Kashmir. Trump said that he had discussed the Kashmir issue with India’s Prime Minister Narendra Modi, with whom he recently met at the G20 last month in Osaka, Japan.

“He actually said, ‘Would you like to be a mediator or arbitrator?’ I said, ‘Where?’ He said, ‘Kashmir.’ Because this has been going on for many, many years,” Trump said.

But the official spokesman for India’s ministry of external affairs, Raveesh Kumar, said Modi had not asked Trump to help mediate.

“It has been India’s consistent position ... that all outstanding issues with Pakistan are discussed only bilaterally,” Kumar wrote on Twitter.