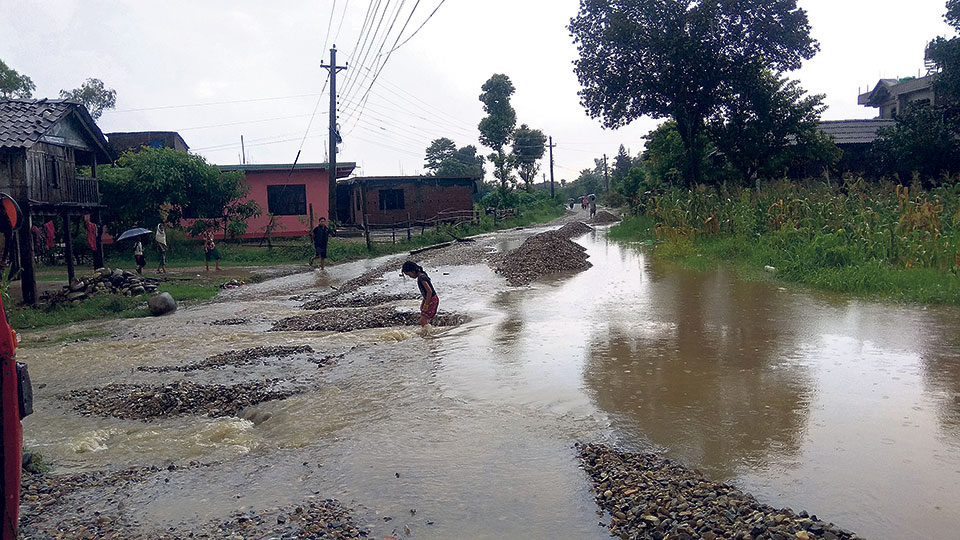 But this time, the rainfall on Saturday not only caused mayhem in the southern areas but also in the northern parts of the district including Hariwon, Lalbandi, Nawalpur, Nayaroad, Bagmati.

Three hours of a torrential downpour on Saturday was enough to cause inundation in the northern areas of the district, increasing a sense of insecurity among the locals in northern villages.

The locals are fearful as the areas got waterlogged even though the areas are not prone to floods.

The latest rainfall also destroyed some roads which were under construction.

In some places, the locals themselves destroyed blacktopped roads to allow the water to flow after the rainfall caused inundation.

“Had the rainfall lasted for an hour, our houses would have been completely submerged,” said Shikhar Dhungel, a local of Hariwon.

Although the northern areas of the district are not geographically prone to floods, the areas have begun to face the risk of inundation due to man-made infrastructures.

Experts claim the problem has emerged due to blockage of drainage system and lack of proper installation of hume pipes during the blacktopping of roads.

One of the locals of Lalbandi, Navaraj Mishra pointed out the lack of accountability among the local authorities as the reason behind such problems during every monsoon.

“In order to show easy and instant development, the local authorities blacktop the road in haste. In many cases, the construction is carried out without installing proper drainage system, culvert, hume pipes which leads to inundation in many areas,” said Mishra.

The aftermath of continuous rainfall in Kathmandu (Photo Feature)

KATHMANDU, July 3: The weather will be partly to generally cloudy throughout the country today with the possibility of light... Read More...

KATHMANDU, Aug 4: The Meteorological Forecasting Division has said most parts of the country will witness heavy rainfall for the... Read More...