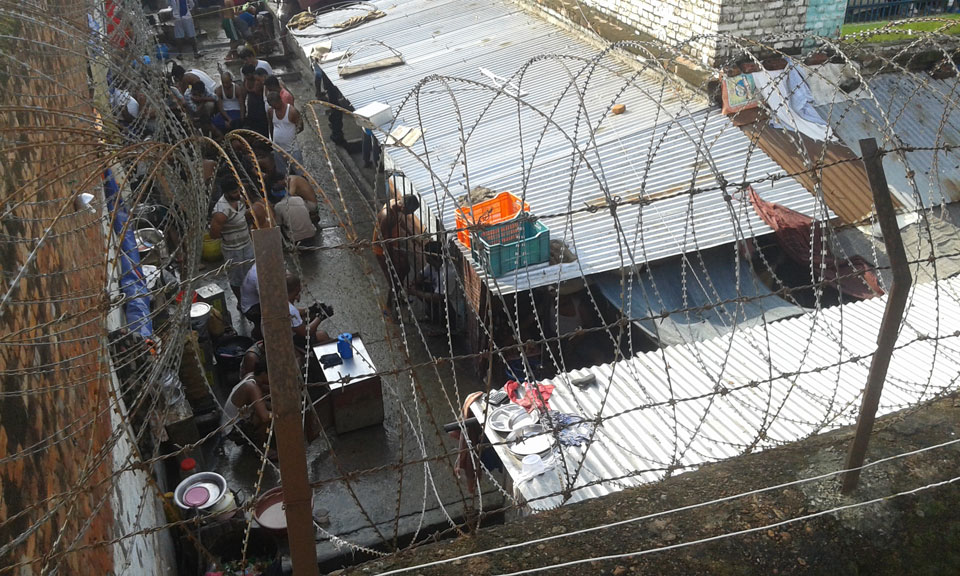 NEPALGUNJ, Aug 2: Nepalgunj Prison is built to accommodate at the most 300 inmates. However, over 700 prisoners have been squeezed into it for a long time now. They cannot sit, move, or sleep properly, the prisoners lament.

“We don’t have room to even sit properly, let alone sleep. And when it rains, things go worse as the roof leaks,” says an inmate Mohammad Yunus Khan. “We have shared our woes with the concerned authorities and human rights activists whenever they visited us, but it has been to no avail,” he added.

Apart from the dilapidated condition of the prison and the difficulties they face in living, the prisoners are also deprived of the opportunity to earn. They have demanded for being availed income generating opportunities within the prison with the authorities, but it too has not been fulfilled so far.

“The prison has many inmates and all of us have nothing meaningful to do. If the prison authorities could provide us with some work like making handicrafts, textiles or paper crafts, that would help us in remaining occupied and also to earn some money. But so far we neither have any work nor money,” said Khan.

Jailer Shyamlal Lamichhane concedes that the prison has been struggling in accommodating the inmates. “The maximum capacity of the prison is 300. But right now there are 709 inmates, of which 62 are women. It is very challenging to manage,” Lamichhane said.

Two years ago, a parliamentarian team had visited the jail. The issue was discussed and steps were expected to be taken. Human Rights Commission and INSEC, among other organizations had shown interest over the matter and even recommended for expanding the prison’s infrastructure.

Chief District Officer, who is supposed to take care of the prison, makes annual visits to the prison. In official reports, it has been suggested that the prison is in instant need of intervention and upgrades to respect the human rights of the inmates. Some reports have even recommended to transfer some inmates to other prisons across the country.

“The prison’s infrastructure is dilapidated. Its walls, roof, and base- every bit of it is in ruins,” Lamichhane said adding that on top of the congestion managing separate spaces for male and female inmates has been a very difficult task for the prison’s management.

“Even if the higher authorities are preparing for long term renovation plan for the prison, it would be great if they could come with some short term plans that would provide immediate relief. If the prison could build some additional rooms, it would at least help us in managing better space for males and females,” Lamichhane said adding that there is plenty of empty space within the prison for making new rooms.

The prison had received an upgrade eight years ago. A building with the capacity to house 100 inmates was built following similar problems. The building gave respite to the prison management and its inmates for some years, but now it is back to square one, says Lamichhane.

“I know the inmates are facing the problem everyday but I am helpless. The prison has been struggling with the problem acutely since three years,” he said.

Police in-charge of the jail, DSP of Nepal police Surendra Budhathoki said that the prison’s infrastructural problem should to be addressed without delay.

“The prison lacks even basic infrastructure. Whatever infrastructure it had is well above the number and needs of its inmates,” Budhathoki said.

The prison does not have a budget that it could use for building basic infrastructures. Even though cost estimation for building separate rooms for male and female inmates was sent to the Building Division Office in Nepalgunj, it is yet to be approved, he complained.
With all inmates in one place, disputes and fights among inmates occur frequently. “When inmates don’t have space, they often mix up with others and have disputes.

Powerful ones bully the weaker ones and because of that it has been difficult for security personals to keep the prison calm,” he said.

Khan feels that they are being treated as sheep and dogs. “We also have
human rights and it is our right to be able to live like a human being. But no one has come forward to protect it,” he said.

ILAM, Aug 28: The District Prison Section Ilam is overflowing with prisoners who are outstretching its full capacity. ... Read More...