$700,000 US support for Gaddhi Baithak restoration 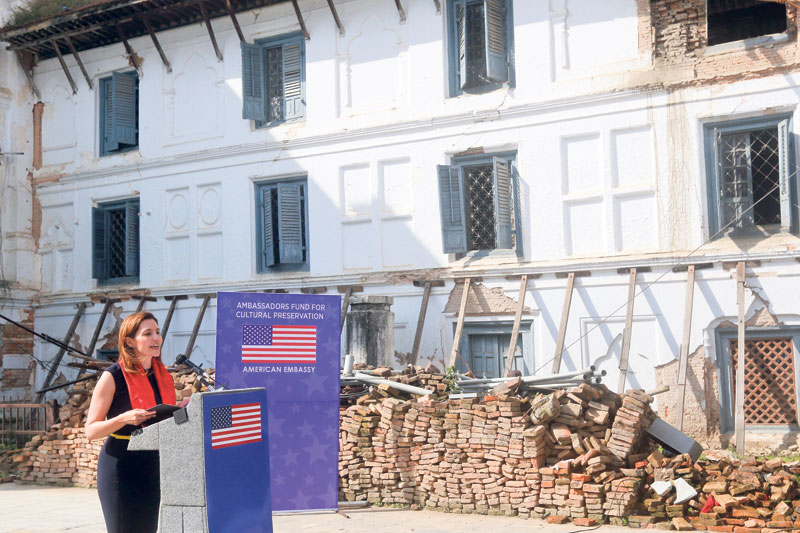 US Assistant Secretary of State Evan Ryan announces financial support for the restoration of the GaddhiBaithak at Basantapur on Friay. Photo: Dinesh Gole/ Republica

KATHMANDU, Sept 30: US Assistant Secretary of State for Educational and Cultural Affairs Evan Ryan announced the US government’s Ambassador’s Fund for Cultural Preservation (AFCP) grant to restore Gaddhi Baithak amid a function at Kathmandu Durbar Square on Friday.

The $700,000 grant will be used for seismic strengthening and restoration of the early 20th century Gaddhi Baithak, and is the largest AFCP project awarded worldwide this year, the US Embassy in Nepal said in a statement on Friday.

“The grant was awarded to Miyamoto Global Disaster Relief, which will repair Gaddhi Baithak and improve the palace’s structural safety and earthquake resistance,” read the statement. The building was damaged in earthquakes last year and is a cornerstone of the Kathmandu Durbar Square UNESCO World Heritage site.

“The Ambassador’s Fund is among the US Government’s most significant cultural initiatives abroad,” said Assistant Secretary Ryan at the function. “The United States is committed to protecting the unique and irreplaceable cultural heritage in Nepal, and the Gaddhi Baithak restoration project aims to restore this important structure to its original grandeur.”

AFCP provides direct grant support for the preservation of cultural heritage in countries worldwide and that since 2001, AFCP has supported more than 640 cultural preservation projects in over 100 countries, it said.

This year’s recipient, Miyamoto Global Disaster Relief, is a US-based charitable organization helping save lives from disaster through engineering. A special expertise of Miyamoto is retrofitting cultural and historical buildings.

ANKARA, July 17: World leaders expressed support for Turkey and its democratic institutions on Saturday after the government quashed an attempted military... Read More...