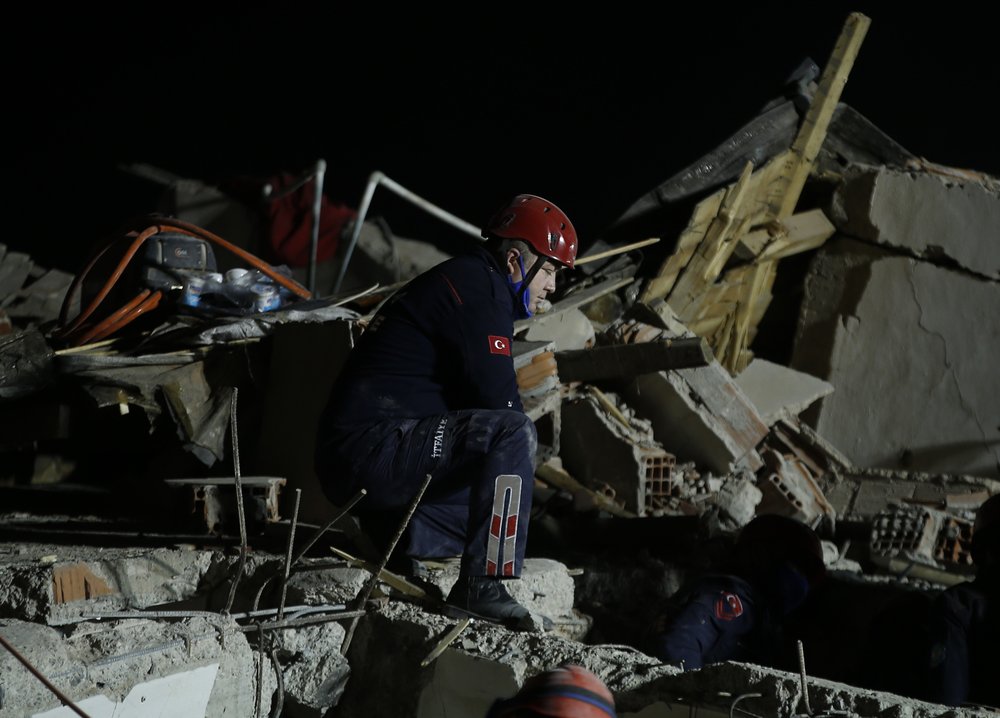 A member of rescue services, kneels to listen during the ongoing search for survivors in the debris of a collapsed building in Izmir, Turkey, Saturday, Oct. 31, 2020. A strong earthquake struck Friday in the Aegean Sea between the Turkish coast and the Greek island of Samos, killing several people and injuring hundreds amid collapsed buildings and flooding. (AP Photo/Emrah Gurel)

IZMIR, Turkey, Nov 1: Rescue workers extricated a 70-year-old man from a collapsed building in western Turkey on Sunday, some 34 hours after a strong earthquake in the Aegean Sea struck Turkey and Greece, killing at least 51 and injuring more than 900 people.

Turkey’s Disaster and Emergency Management Presidency, or AFAD, raised the death toll in Izmir, Turkey’s third-largest city, to 49 as rescuers pulled more bodies out of toppled buildings. Two teenagers were killed Friday on the Greek island of Samos and at least 19 others were injured.

The Friday afternoon earthquake, which the Istanbul-based Kandilli Institute said had a magnitude of 6.9, was centered in the Aegean northeast of Samos. AFAD said it measured 6.6 and hit at a depth of some 16 kilometers (10 miles).

A small tsunami was triggered in the Seferihisar district of Izmir, drowning one elderly woman, and on the Greek island. The tremors were felt across western Turkey, including in Istanbul, as well as the Greek capital, Athens. Hundreds of aftershocks followed.

Ahmet Citim, 70, was pulled out from the rubble shortly after midnight Sunday and was hospitalized. Health Minister Fahrettin Koca tweeted that the man said: “I never lost my hope.”

Search-and-rescue teams continued work in nine buildings in Izmir as day broke on the third day. AFAD said more than 5,700 personnel from state agencies, municipalities and non-governmental organizations had been activated for rescue work and hundreds of others for food distribution, psycho-social help and building damage control.

“If they are alive, we have high chance to get to them for 72 hours,” Vice President Fuat Oktay told journalists. “God willing, it will be like that.”

Dogs, cats and rabbits were also rescued from the debris.

Turkey is crossed by fault lines and is prone to earthquakes. In 1999, two powerful quakes killed some 18,000 people in northwestern Turkey. Earthquakes are frequent in Greece as well.

In a show of solidarity rare in recent months of tense bilateral relations, Greek and Turkish government officials issued mutual messages of solidarity for the past two days. Turkey, which saw more fatalities and damage, thanked other countries and international organizations for their statements of support.

The quake occurred as Turkey was already struggling with an economic downturn and the coronavirus pandemic. So far, more than 10,000 people with the virus have died in Turkey.