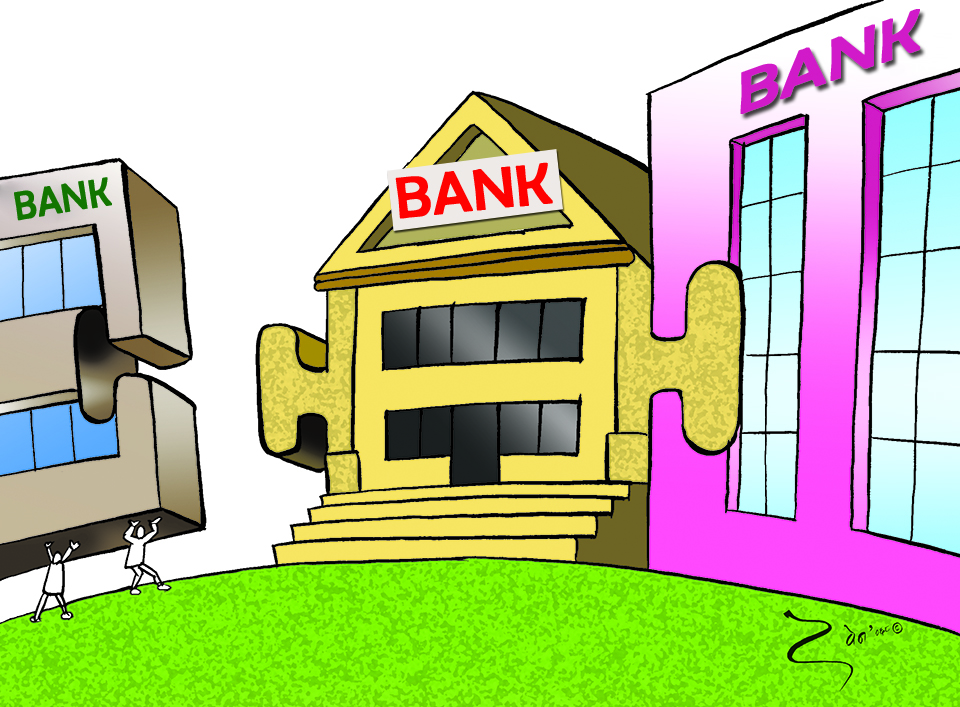 Summoning the chairmen and chief executive officers (CEO) of all commercial banks last month, he sought their written commitments to seriously look for suitable partners for marriage.

While Governor Nepal – whose five-year tenure at the central bank will end in the current fiscal year – has been pushing for the mergers and even indicated an intention of ‘forceful mergers’, experts say he has not been able to establish any plausible justification for the big push for amalgamations in the banking sector.

The question that central bankers are struggling to answer now is: Why mergers?
“It is still not clear what the NRB is trying to achieve with its merger policy. Is it to address the liquidity problem or to increase financial access? I have not found a plausible reason,” Biswo Paudel, an economist, told Republica.

NRB officials, however, point out a need to reduce the ‘high number’ of BFIs in the country.
However, the NRB with its fully-functioning research department has not done any study yet to either ascertain or estimate the suitable number of banking institutions needed for catering to the economy. Nor has there been any research on the impact of mergers in the financial sector and in the larger economy.

If the NRB’s conclusion is that the high number of BFIs is posing a challenge ineffective monitoring and maintaining of banking norms, another question it must answer first before enforcing such a policy is why it issued licenses to so many institutions that it would later find it hard to oversee or regulate.

“These are all banking and financial institutions that were licensed by the NRB. Why was there a need to issue the licenses in the first place if we have to now arrive at this point of mergers? There must be serious introspection in this regard,” said Shovan Dev Pant, CEO of Bank of Kathmandu, at a recent interaction organized by NRB itself.

Bankers also say that the ‘big merger’, if it is intended for financial sector consolidation, should be encouraged through various incentives and facilities rather than through a forceful approach.

“The central bank has been encouraging mergers for the last few years as part of its initiative for financial consolidation. But, why have many banks not opted for a merger. We have to look into this issue,” said Gyanendra Dhungana, president of Nepal Bankers Association. “It’s not like you instruct banks to find a partner immediately and go for marriage. It takes time. There are a lot of issues that need to be settled beforehand like benefits of amalgamation, the composition of the board in the merged entity and the fate of the employees including the CEOs,” he added.

Many also warn that a policy of ‘forceful’ merger of commercial banks, as indicated the NRB governor, could be ‘counter-productive’.

Even the central bank’s decision to raise the paid-up capital by four times a few years ago did not compel them to go for mergers as most of them met the minimum capital mainly through rights issues. According to NRB data, 165 BFIs went into merger or acquisition, eliminating the identity of 123 institutions. However, mergers at commercial banks have been very slow. Only six commercial banks have gone into merger so far to form three institutions.

For some, introducing one big policy initiative after another without considering the implications only adds uncertainty in the banking sector.

“First it was a cap on interest spread rate. Then, there was a sudden hike in paid-up capital. Now there is a push for mergers. Unstable policy does not bode well for the financial sector when the macroeconomic situation is weak,” said Poudel. “When NRB itself is saying that no bank is at risk, I do not see the need to go for the consolidation for financial stability,” added Poudel.