Man admits to killing his wife to marry girlfriend 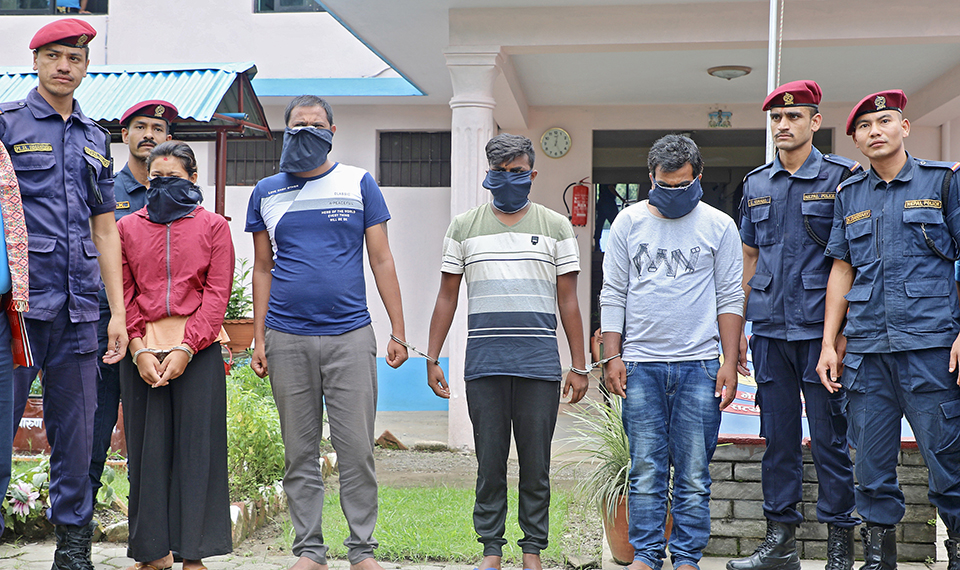 Republica (From left) Ramesh Nepali and his friends Sanjaya Sharma and Chitaranjan Sah along with his girlfriend Anu Pariyar who have been accused of killing his wife due to extra-marital affair.

POKHARA, July 18: A middle-aged man in Pokhara allegedly hired contract killers to murder his wife so that he could marry his girlfriend.

Ramesh Nepali of Pokhara Metropolitan City-15, who runs a mobile store in Prithvichowk, has been accused of orchestrating the murder of his 26-year-old wife Laxmi Pariyar. It has been learned that he hired the killers from India as suggested by his mistress Anu Pariyar.

Laxmi was killed on June 16. The next day, Ramesh filed a missing report with the District Police Office (DPO). He had reached the DPO clutching his two sons.

He begged everyone from constables to high-ranking police officials to find his wife. Not just police, he also requested FM stations and even television channels to publicize a notice regarding his missing wife.

He even called Youtubers and shed crocodile tears in front of them saying his children are living a miserable life without her. Despite all the drama, he could not deceive the police.

As police could not find Laxmi despite searching for days, they started interrogating the family members and relatives of Ramesh and the locals. Police sensed that something was fishy and finally arrested Ramesh on July 10.

Police suspected his involvement in Laxmi's disappearance as her phone was found in his shop and also because he had bought a life insurance policy worth Rs 10 million in her name four months ago. During the police interrogation, he could not hide his crime for long and finally admitted that he killed her with the help of contract killers.

Following his statement, Kaski Police recovered Laxmi's remains from Karkale forest of Pokhara Metropolitan City-22. Ramesh also confessed to having an extramarital affair with Anu for more than a year. Anu and Laxmi happen to be sisters in relation. It has been learned that Laxmi somehow found that her husband and Anu had sexual intercourse. She kept warning Ramesh to maintain distance from Anu but in vain. This was the reason why Anu provoked Ramesh to kill Laxmi.

Later he hired contract killers from India by paying Rs 1 million. On June 13, three contract killers arrived in Nepal to kill Laxmi. Friends of Ramesh had helped him arrange the killers. By hiring motorbikes, the contract killers reached Karkale forest while Ramesh came there with his wife. He had taken her there saying that they would fetch a herb from the forest that would cure a wound in her leg. As Laxmi was searching for the herb, Ramesh went to pee as per the plan. Then came the contract killers to kill her.

Police have arrested Ramesh along with his friends Sanjaya Sharma and Chitaranjan Sah along with his girlfriend, Anu. Search has been intensified to find the three contract killers, according to Superintendent of Police (SP) Dan Bahadur Karki, Chief of the District Police Office (DPO), Kaski. The arrestees made public on Wednesday.

Girl kills her mother in complicity with her boyfriend

KATHMANDU, July 1: Police have made public the four accused involved in the murder of a sixty-year-old woman in Bhaktapur. Read More...

Man who burned wife to death arrested after 17 yrs

KATHMANDU, June 26: Police have arrested a man on the charge of burning her wife to death seventeen years after... Read More...