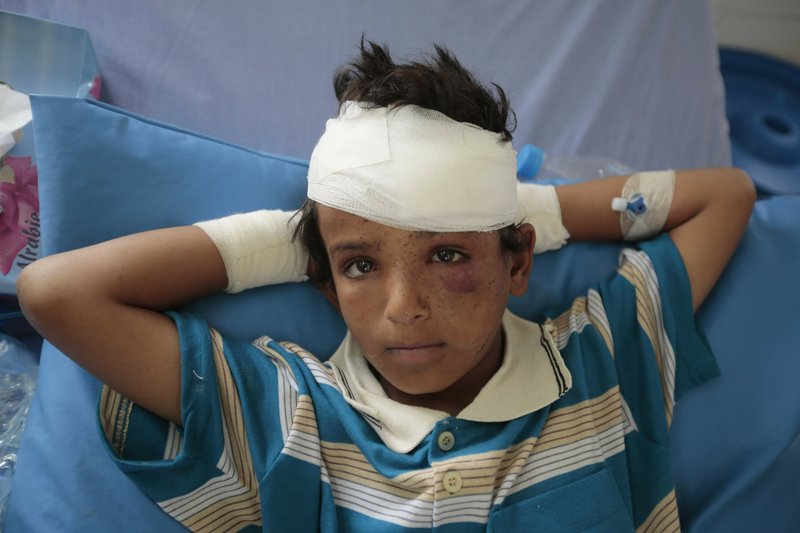 FILE - In this Aug. 12, 2018, file, photo, A child injured in a deadly Saudi-led coalition airstrike on Thursday rests in a hospital in Saada, Yemen. A database tracking violence said Wednesday, June 19, 2019 that at least 91,600 people have been killed in Yemen’s civil war, presenting a new estimate after completing reporting for the first months of fighting in 2015. (AP Photo/Hani Mohammed, File)

June 29: Over 7,500 children have been killed or wounded in Yemen in the last 5 1/2 years as a result of airstrikes, shelling, fighting, suicide attacks, mines and other unexploded ordnance, according to a U.N. report released Friday.

The report by Secretary-General Antonio Guterres said the killings and injuries were among 11,779 grave violations against children during the period between April 1, 2013 and Dec. 31, 2018.

It said the figures are likely to be worse because monitoring Yemen has become increasingly difficult.

The conflict in the Arab world’s poorest country began with the 2014 takeover of Yemen’s capital Sanaa by Iranian-backed Houthi Shiite rebels, who toppled the government of Abed Rabbo Mansour Hadi. A Saudi-led coalition allied with Yemen’s internationally recognized government has been fighting the Houthis since 2015.

Saudi-led airstrikes have hit schools, hospitals and wedding parties. The Houthis have used drones and missiles to attack Saudi Arabia and have targeted vessels in the Red Sea.

Civilians have borne the brunt of the conflict, which has killed thousands of people, created the world’s worst humanitarian crisis, and brought Yemen to the brink of famine.

Virginia Gamba, the U.N. special representative for children in conflict, said that while some positive measures have been adopted by the warring parties, “the suffering of children in Yemen has worsened during the reporting period, becoming simply appalling.”

“The children of Yemen had nothing to do with the start of this conflict,” she said. “They should now be given the opportunity to exit from it and be assisted to fully recover.”

Gamba called on all parties to the conflict and those who can influence them to “prioritize peace and actively engage in the ongoing peace negotiations.”

According to the report, the largest number of violations against children in the 5 1/2 years were the 7,508 youngsters who were verified to have been killed or maimed.

The recruitment and use of 3,034 children by the warring parties — including 1,940 by the Houthis and 274 by the government — was the second largest violation, it said.

The report also said 340 boys were verified to have been detained for their actual or alleged association with the warring parties.

It said only 11 incidents of rape and sexual violence were verified, explaining that the number remains under-reported “mainly for fear of stigmatization and lack of appropriate response services.” The verification of abductions of children was also limited during the reporting period, with just 17 verified incidents, it said.

The report said the number of children denied access to humanitarian assistance sharply increased over the 5 1/2 years, “with catastrophic consequences.” It said the U.N. verified 828 incidents where aid was denied.

The secretary-general’s second report on children in Yemen’s conflict also noted that attacks on schools and hospitals remained high, with 345 of the 381 that were verified causing the partial or total destruction of the building.

Of “great concern,” the report said, is the verified military use of 258 schools, which is higher than the 244 schools that were attacked. The result is that thousands of boys and girls were prevented “safe access to education,” it said.

Nepse sees a slight fall of 0.2 percent on Tuesday
13 minutes ago