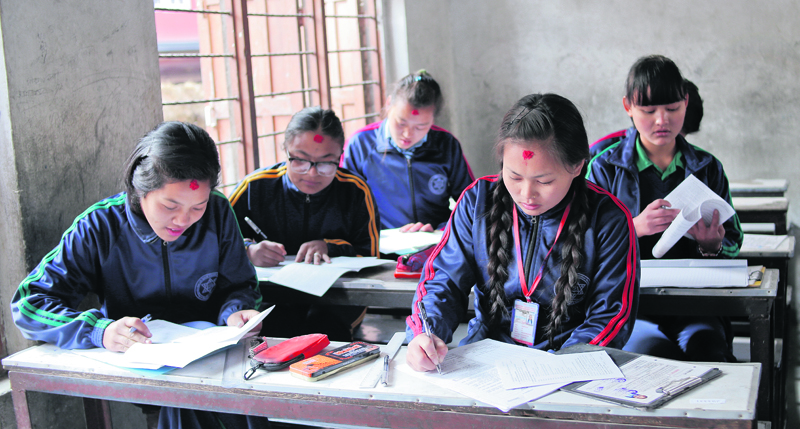 KATHMANDU, June 29: Although private schools are found doing relatively well in the Secondary Education Examinations (SEE), many community schools across the country are also found to have attained excellent results.

Students from various community schools have scored a GPA of 4 out of 4 in the SEE results published on Thursday.

Gyanodaya in Kathmandu
Out of 264 students appearing in the SEE from Gyanodaya School at Bafal, 121 students scored over 3.6 GPA including one scoring 4 and two with 3.95. The previous year 54 students from the school scored over 3.2 GPA, 60 scored over 2.8 GPA and 31 over 2.6.

According to Principal Natikaji Maharjan, only 74 students out of a total of 206 scored over 3.6 GPA in the SEE last year. “We are excited with the excellent performance by our students. This is the result of hard work by students and teachers and a favorable environment created by the parents,” Maharjan added.

Similarly, Shramik Shanti Secondary School in Lalitpur has also performed outstandingly among the community schools in the district.

125 score over 3.6 GPA from Pokhariya HSS, Biratnagar
Pokhariya Higher Secondary School, which has started classes in English medium under the community school reformation campaign, has 125 students scoring over 3.6 GPA including two with 3.95 GPA, out of a total of 312 appearing in the SEE this year.

Two other community schools, Adarsha HSS and Satyanarayan HSS, in the same district have also come up with exciting results.

4 GPA from Kalika school in Butwal
Sabina Subedi of Kalika Manav Gyan Secondary School in Butwal scored 4 GPA in the SEE results, adding to the attraction toward community schools. “This is because of my hard work and good mentoring by teachers,” she said.

4 GPA from Amarsingh in Pokhara
Amarsingh Model Higher Secondary School in Pokhara has maintained its excellent record with one student scoring 4 GPA and 44 students scoring over 3.6 GPA. According to the school administration, out of 207 students 52 others scored over 3.2 GPA and 58 scored 2.8, which is better than many private boarding schools in the district.

“Our results are not worse than that of private boarding schools and better than many private schools in the district,” said Tejaswi Baral, the principal.

Sitaldevi Secondary School and Balmandir Secondary School in Kaski have also come out with exciting results. Principal of Balmandir School Sushil Basnet said that with the improving quality of education the attraction of community schools has increased in recent years.

Community school student tops in Gorkha
Saraswoti Secondary School in Gorkha has claimed that its student Seema Shrestha has scored 3.95 GPA in this year’s SEE results. According to Principal Purushottam Bhattarai, another student has scored 3.9 GPA and is among 11 students scoring over 3.6 GPA from the school. Out of 121 students a majority  scored at least 2.4 GPA, according to the school.

Satyawati School in Tanahun also had satisfactory results with at least 56 students scoring over 3.6 GPA. Similarly, a student from Devmani Sanskrit School has scored 3.95 GPA in the SEE. Interestingly, the authorities had planned to merge the school with another one following declining student numbers.

3.96 GPA from community school in Palpa
Two students from Damkada Model Secondary School in Palpa have scored 3.96 GPA in the SEE, which the school has claimed is the highest in the district under technical studies. Like Damkada, Devbani in Tansen and Janata, Mathagadi, Dibyajyoti, Ramtulsi, Darithati and Ganga Secondary Schools in the district had exciting results in the SEE this year.

KATHMANDU, June 28: The performance of public schools continues to remain dismal despite decentralization in the education system, the Secondary... Read More...

As a tenth grader, I urge the government to cancel the SEE and save lives of 4,82,219 students

As a tenth grader who is supposed to take the SEE exam but cannot due to the coronavirus pandemic, a... Read More...