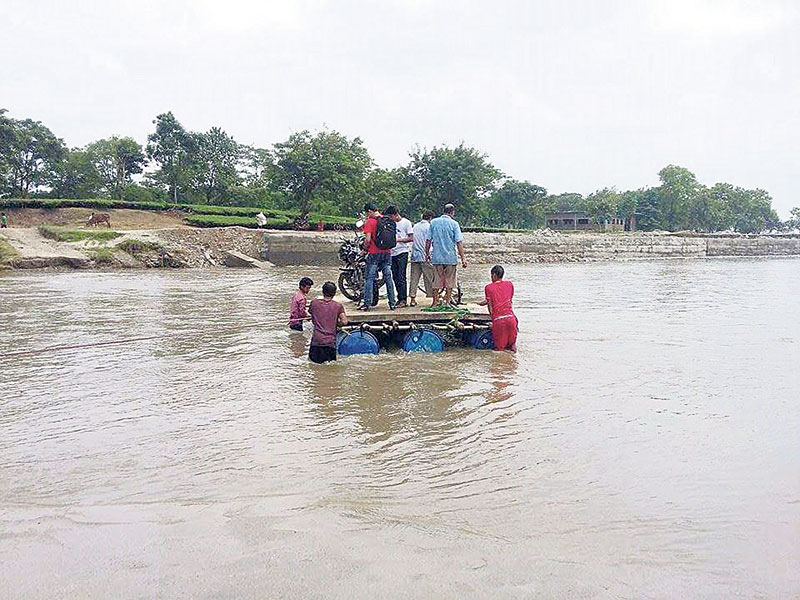 Locals crossing the Deuniya River on a makeshift ferry in this undated photo. Bridge over the river was supposed to be completed three years ago. Photo: Republica Files

JHAPA, Oct 3: Sluggish development of infrastructures across the country might have multiple reasons. However, lack of sense of responsibility among contractors is considered as a major factor by government officials.

Dozens of developmental projects in Jhapa are in limbo as contractors disappeared without completing them. Contractors are pro active during the bidding process and until they receive the payment installments. Most vanish after they receive the final installment of their project officials say.

According to locals, such trend is simply common among contractors who are supposed to build bridges, construct roads and public buildings. Locals in Jhapa stated that the high handedness of contractors is because of very weak bureaucracy.

“Delaying project completion is very common issue with contractors. They don’t really care about deadlines. But most of them do not even complete their projects. There are a number of project in Jhapa that have been remain incomplete for years,” said Shyam Lal Shrestha, a local of Damak.

He added that delay in repairing and construction of roads has been giving hassles to people for years now and blamed the bureaucracy for letting the contractors acting according to their will. “Our bureaucracy is not strong and because of that contractors do not feel it necessary to complete projects on time or at all.”

As Shrestha pointed out, incomplete construction of bridges and roads are quite visible in Jhapa. For years, they are wearing the same ugly look. Yet, they fail to get attention.

“The problem with contractors is that they bid for very low cost just to get the project. After grabbing the project, they feel they are done. Then they disappear. This kind of disease is even common in Jhapa,” says Matrika Shivakoti, former president of Civil Society, Jhapa. “This has added to the mess in all around. In name of development, the government is in fact making public suffer,” he added.

Shivakoti stressed that things must be corrected right at the bidding process. Influence of political parties in developmental projects and bidding process is the root cause of the problem, he said.

He added that the poor bureaucracy is further weakened by the local political pressures. “When the government is not able keep an eye on and or hold the contractors responsible, they get easy escape from their responsibilities. For this, the concerned departments must be able to keep track of the project assignments. Strict monitoring is needed,” he said.

One of the delayed projects in Jhapa is a bridge over Deuniya River. This bridge was supposed to complete three years ago. However, around 60 percent of construction work has only been completed so far. The bridge could shorten distance from Chandragadhi to Handibaari by 10 kilometers. While the bridge would allow travelers to cross in 4 kilometers, its absence means they have to take a different 14 kilometer long route to reach the same point. Time and energy of thousands of people is thus wasted daily just in lack of a bridge which has been left neglected for the last two years.

There are number of other bridges which have not been completed on time, said Kumuchanra Jha, secretary of Haldibari VDC. “Sometimes it is due to technical reasons, and some other times due to the negligence of contractors. A bridge in Haldibari was still under construction when it was badly damaged by flood last year.

All the materials were washed away. Even the contractors fled away then,” Jha said. He added that recently the department of roads had rejected the bridge stating that its design and plaster are not to prescribed requirements.

Jha further elaborated that the bridge could benefit massively to the residents of Bhadrapur, Rajgarh, Chakchaki, Goldhap, Sharanamati, Kumorkho and Taghan. “The bridge connects those areas. Its existence would help the locals in many ways. But the contractor has not been seen around for a while now,” he said.

According to the eastern regional office of the road department, it followed the project progress and had extended the deadline for the unfinished projects. ‘However, even then, the contractors did not respond well.’

“The deadline was extended once, twice and then thrice. But still, that did not work,” said an engineer at the regional office. He added that the contractors did not show up even after the crossing of the third deadline. “Even the extended deadlines crossed, but just 50 / 60 percent of work have been finished,” he said.

“Basically when it comes to incomplete roads and bridges, people are directly affected. The government should stop making excuses and put in effective measures and mechanisms to ensure that contractors finish projects on time,” said Shivakoti.

Construction of the much hyped Postal Highway has also been facing similar fate. Locals claim that the government is always fast on announcing new projects but is always slow to deliver the promise. “Completion of the Postal Highway could have completely changed people’s life in the Tarai belt. But god knows whether that would ever complete,” Shivakoti said.

ROLPA, July 2: Home minister Ram Bahadur Thapa has been speaking of penalizing contractors who do not complete work on time.... Read More...

In Nepal, half a dozen contractors exercise monopoly over construction contracts. The cartel holds sway over entire construction administration and... Read More...