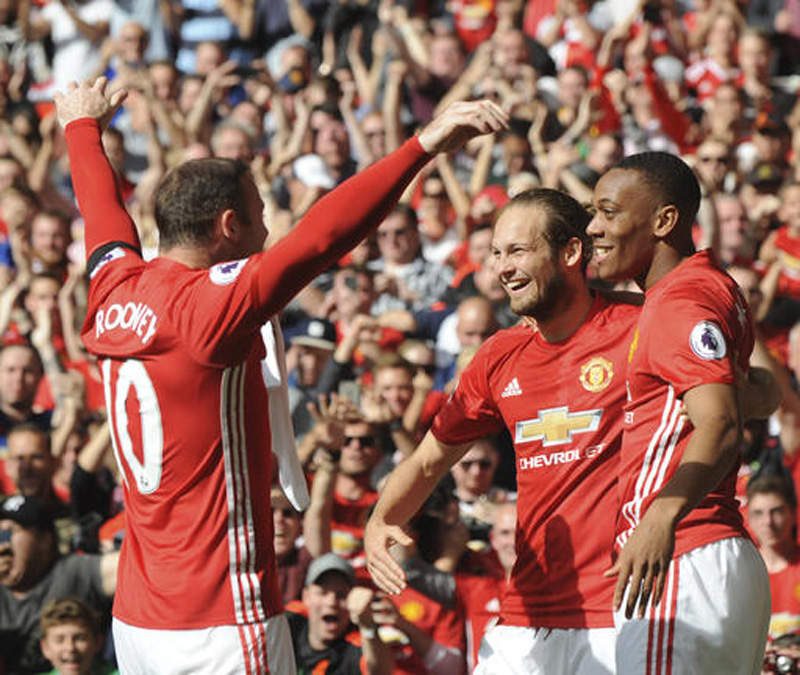 MANCHESTER, Oct 2: Manchester United's stumbles in the Premier League continued Sunday with a 1-1 home draw against struggling Stoke, which left Old Trafford without losing for the first time in 36 years.

United, which has won just one of its last four league games, took the lead in the 69th minute through Anthony Martial's curling strike — two minutes after he came on as a substitute.

Joe Allen grabbed an 82nd-minute equalizer for Stoke following a rare mistake by David de Gea, who fumbled a long-range shot to allow Jon Walters to scoop a cross against the bar before Allen smashed home from close range.

United failed to beat an opponent that started the day in last place, still hasn't won in seven games in the league this season, and had lost on its last 13 visits to Old Trafford dating back to 1980.

Jose Mourinho's team created plenty of chances but faded in the second half, less than three days after a similar lineup played in the Europa League.

Stoke was also thankful for a superb display by 33-year-old goalkeeper Lee Grant, making only his second appearance in the Premier League. Among his best saves were reflex stops from Zlatan Ibrahimovic in the second minute and again in the latter stages.

"To go a goal behind against a team like that and come back is a great ask," said Allen.

Grant had no chance with Martial's goal, the France winger pouncing on a loose ball after fellow substitute Wayne Rooney was dispossessed and whipping a shot into the top corner from an angle. Grant was also beaten when Paul Pogba leapt for a right-wing cross and connected with the ball with his shoulder, only for the ball to rebound off the crossbar.

United won its first three league games of the season but has slipped off the pace since losing the Manchester derby in early September.

Rooney, the club captain, started on the bench for the second straight league game.

Cement production cut down by 70 percent
7 hours ago

Demand for resignation of CAN executive committee
41 minutes ago
Two injured as a man tries to self-immolate in Pokhara, woman's condition critical
1 hour ago

Far West of Nepal  at high seismic risk
1 hour ago