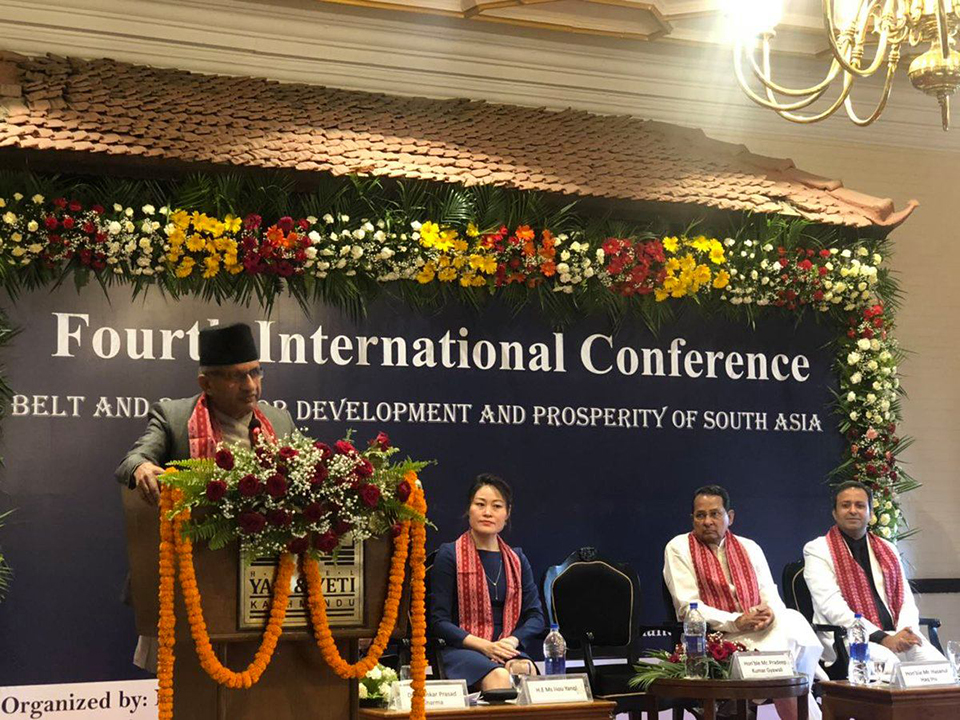 KATHMANDU, June 21: Minister for Foreign Affairs Pradeep Gyawali has said Nepal is committed to implementing the agreements reached with China under the framework of Belt and Road Initiative (BRI) projects.

Addressing the Fourth International Conference titled Belt and Road for Development and Prosperity of South Asia in the capital Thursday, Minister Gyawali said Nepal intends to utilize the opportunities offered by BRI in the field of connectivity and development of mega infrastructures.

He said Trans-Himalayan Multi-dimensional Connectivity Network and Nepal-China Cross-border Railway have been included in the joint communiqué issued after the Second Belt and Road Forum held in Beijing. "We want to develop ports, railways, highways, and information highways under the framework of the Belt and Road Initiative. Landlocked countries like Nepal want to reap benefit from the enhanced connectivity," he said.

The foreign minister said that Belt and Road has achieved global importance and global attention as increasing number of countries and international organizations have been signing cooperation with China to become the part of this initiative. "The Belt and Road Initiative is an inclusive concept which aims to promote shared benefits, good governance, enhanced railroad connectivity and sovereign decision-making of the relevant countries," the minister said.

Speaking at the conference organized by Nepal China Friendship Forum, Chinese envoy to Nepal Hou Yanqi said the South Asia region plays important role in the BRI. "We want to have more meaningful cooperation with South Asian countries under the BRI framework. We are currently constructing the China-Pakistan Economic Cooperation and Hambantota Port in Sri Lanka," she said.

The BRI follows the principle of mutual benefit, shared interests and win-win cooperation, she said. "No countries have fallen into debt trap since China launched the BRI."

Ambassador Hou said although India holds different opinion about BRI this has not affected their bilateral relations. She also clarified that BRI does not have any geopolitical agenda and it is solely aimed at taking countries out from the trap of no development.

Member of Parliament and president of Jatiya Samajtantrik Dal (Bangladesh) Hasanul Haq Inu had highlighted how BRI provides opportunities for development and prosperity of South Asia in his keynote speech. He also highlighted the priorities of foreign policy of Bangladesh saying that his country is pursuing a balanced foreign policy on the basis of mutual benefit and friendship. "As a neighbouring country of China and India, we have been maintaining a balanced foreign policy with our neighbours and rest of the world," he said.

Scholars and experts from Nepal, India, China, Bangladesh, Philippines, Malaysia, Pakistan and Laos have arrived in Kathmandu to deliberate on the theme of the conference. They are scheduled to deliver their remarks on "BRI lessons from ASEAN", "BRI for trade and connectivity in South Asia" and "Trans-Himalayan cooperation for shared prosperity" on the second day of the conference.