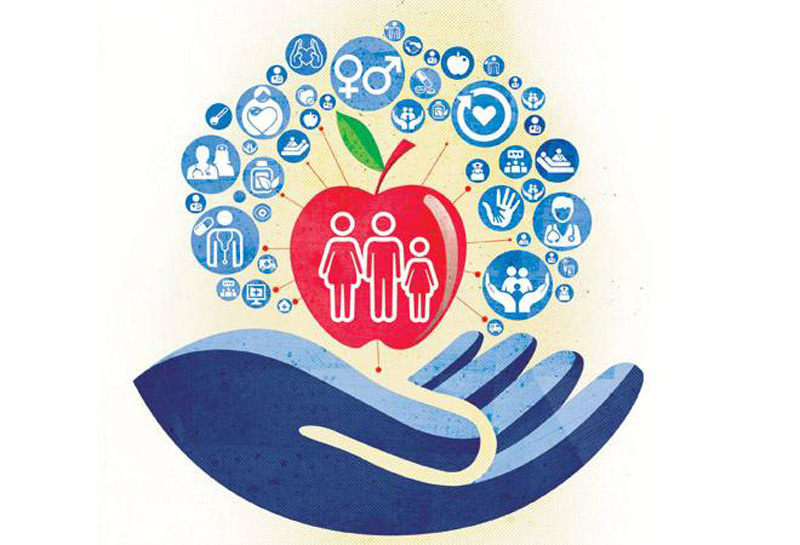 It is possible to significantly improve poor people’s access to healthcare through health insurance
In 2015, the World Health Organization (WHO) and the World Bank together published a report stating that 400 million people globally lack basic healthcare services. Their datasets show that some 150 million people in the world face ‘financial catastrophes’ due to their high health expenses. It was in this context that WHO coined the term Universal Health Coverage (UHC), under which each and every person on the planet has access to cheap and reliable health services. Later, the UN’s Sustainable Development Goals (SDGs) also supported universal coverage.

In Nepal, both the National Health Policy (2014) and the National Health Sector Strategy (2015) aim for universal coverage. But even though this is a noble goal, there have been no concrete actions. UHC is a political agenda. So there needs to be engagement of multiple stakeholders if Nepal is to achieve its set goal of universal coverage by 2030.

Thus Nepal is exploring many ways to raise the money for universal coverage, including through health insurance.

The government has recently implemented a universal health insurance pilot program in Kailali, Baglung and Ilam districts, with the goal of reducing the financial hardship of people and increase their access to (and utilization of) health care system. This is being thought of in the context where 55 percent health expenditure in Nepal is out-of-pocket. A study conducted by KOICA (2013) shows that rural residents have a limited understanding of health insurance and risk management. It also found that they consider their chances of availing themselves quality healthcare, when they need it, as pretty slim.

The health insurance scheme that is being implemented is family-based-voluntary and contributory scheme. A family with five members has to pay Rs 2,500 per annum and against it, they are liable to Rs 50,000 worth of health services, which will be provided by the health insurance implementing agency of the government. The primary healthcare centers and district hospitals have been designated as primary delivery points and zonal, regional and central hospitals as referral centers.

But are households willing to pay Rs 2,500 a year in health insurance? Common people don’t much trust public health facilities that routinely run out of even essential medicines, where there are no competent health workers, nor the right equipment. In this context, making the insurance attractive to common folks is a big challenge.

International experience shows that it is possible to significantly improve poor people’s access to quality healthcare through health insurance. In Thailand, the ‘30 Baht’ health insurance scheme has been highly successful while India has also been able to successfully provide health cover to all those living under the poverty line. Similarly, the Maldives covers the health costs of all its citizens through a similar scheme.

It is the responsibility of the Ministry of Health to strengthen peripheral health facilities and ensure quality service. Past experience with community-based health insurance indicates that those who insure themselves want a guarantee of 24/7 availability of drugs and doctors. It would be unfair on them if the service they seek is unavailable in public health centers and they again have to fall back on private hospitals and clinics for treatment. So perhaps a better option would be to include private health providers in the scheme from the start.

Weeklong lockdown in three wards of Sindhuli district
6 hours ago

2,559 new cases detected across country, 937 in Kathmandu Valley
1 hour ago