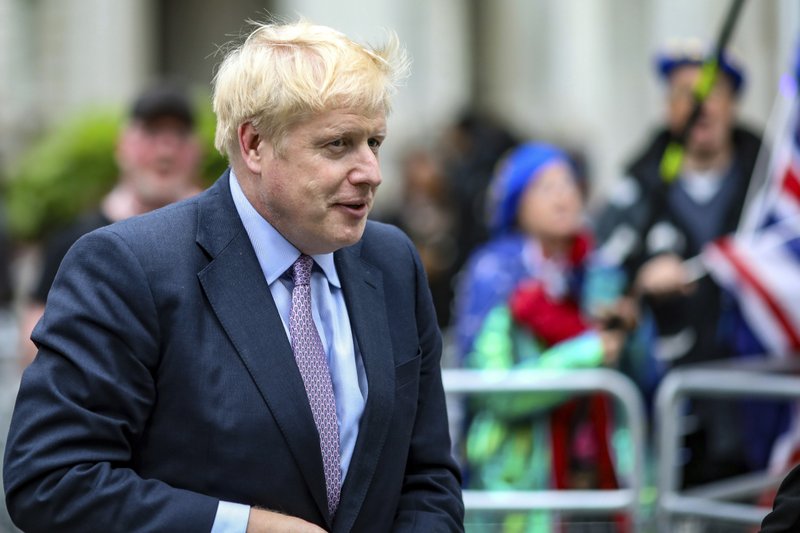 British Conservative Party leadership contender Boris Johnson arrives for a live TV debate in central London Tuesday, June 18, 2019. Britain's Conservative Party will continue to hold elimination votes until the final two contenders will be put to a vote of party members nationwide, with the winner due to replace Prime Minister Theresa May as party leader and prime minister.(AP Photo/Vudi Xhymshiti)

LONDON, June 19: Former Foreign Secretary Boris Johnson increased his lead in the race to become Britain’s next prime minister Tuesday in a Conservative Party vote that eliminated one of his rivals and enabled upstart candidate Rory Stewart to defy expectations by remaining in the contest.

Johnson, a flamboyant former foreign secretary, won 126 of the 313 votes cast by Conservative lawmakers in their second-round of balloting. The vote left five contenders vying to be the Tory leader who will succeed Theresa May as prime minister, and all but guaranteed Johnson would be one of the two candidates competing in a runoff decided by rank-and-file party members as well as elected politicians.

Jeremy Hunt, who followed Johnson as foreign secretary in May’s government, had the next-highest number of votes. Hunt Environment Secretary Michael Gove, Home Secretary Sajid Javid and Stewart all trailed far behind in what is now effectively a race for second place.

Ex-Brexit Secretary Dominic Raab got only 30 votes, three short of the threshold needed to go through to the next round.

After lawmakers’ votes were counted, Johnson and the other remaining candidates traded barbs about Brexit and their plans for the economy, the welfare system and the environment in a messy, fractious televised debate. Johnson was accused of trying to dodge scrutiny after he skipped an earlier debate and a question session with journalists.

Tory lawmakers will vote again Wednesday and Thursday, eliminating at least one candidate each time. The final two contenders will go to a postal ballot of all 160,000 Conservative Party members nationwide.

The winner who will replace May is due to be announced in late July. May stepped down as party leader earlier this month after failing to secure Parliament’s approval for her Brexit deal. She is leading the government until her successor is picked.

All the contenders vow they will succeed where May failed and lead Britain out of the European Union, though they differ about how to break the country’s Brexit deadlock.

Johnson insists the U.K. must leave the bloc on the rescheduled date of Oct. 31, with or without a divorce deal to smooth the way.

He said during the BBC debate there would be a “catastrophic loss of confidence in politics” if Brexit was delayed any further. The withdrawal, originally set for March 29, was pushed back after May sought two extensions from the EU.

The EU says it won’t reopen the Brexit agreement it struck with May’s government, which has been rejected three times by Britain’s Parliament. Many economists and businesses say a no-deal exit would cause economic turmoil by ripping up the rules that govern trade between Britain and the EU.

Stewart said “there would never be no-deal” if he were prime minister because it would be too damaging to the economy.

While Johnson is odds-on favorite to become Britain’s next leader, some in the party still have doubts about him. He is admired by many Conservatives for his ability to connect with voters, but others mistrust him for his long record of misleading and false statements, verbal blunders and erratic performance in high office.

Pressed about his language during Tuesday’s debate, he said “insofar as my words have given offense over the last 20 or 30 years ... I am sorry for the offense that they have caused.”

Hunt and Gove are both considered experienced and competent ministers, but unexciting. Gove seems to have shrugged off the revelation that he used cocaine two decades ago.

Javid, the son of Pakistani immigrants, says he offers a common-man alternative to private school-educated rivals like Johnson and Stewart, although he was a highly paid investment banker before entering politics.

Stewart has the most momentum, almost doubling his first-round tally, while Hunt and Gove barely increased their totals.

Stewart, Britain’s minister for international development, calls himself the “anti-Boris,” the pragmatist rival to populist Johnson. He has energized the contest with a combination of plain-speaking and quirkiness.

A former diplomat who once walked across Afghanistan and was a deputy provincial governor in Iraq after the 2003 U.S.-led invasion, Stewart is also the only contender regularly asked whether he has been a British spy. He denies it — but notes that former spies are barred by law from disclosing their covert pasts.

Stewart claimed to be the only candidate facing up to political reality, arguing the only way to leave the EU was to get Parliament to approve May’s unpopular Brexit deal.

“We are in a room with a door, and the door is called Parliament,” he said. “And I am the only one trying to find the key to that door. Everybody else is staring at the walls yelling ’Believe in Britain.”

Retorted Gove: “We’ve run into that door three times already, Rory. We’ve got to have a different route out.”