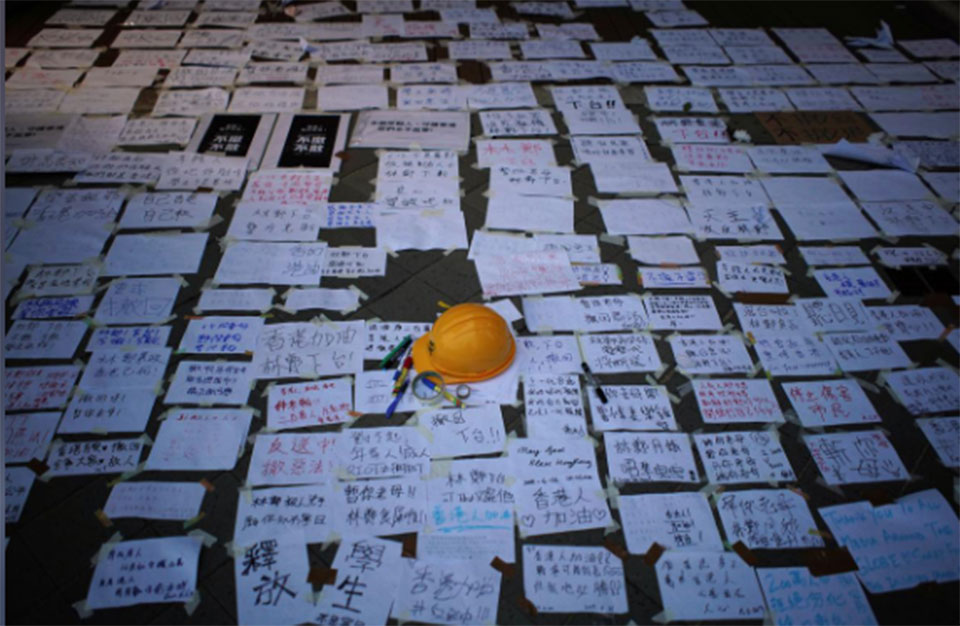 A helmet and messages of support for the protest against a proposed extradition bill, are seen displayed early morning in Hong Kong, China June 17, 2019. REUTERS/Athit Perawongmetha

HONG KONG, June 17:  Activist Joshua Wong, who has become the face of Hong Kong’s push for full democracy, walked free from prison on Monday and vowed to join a mass protest movement demanding that the city’s Beijing-backed leader, Carrie Lam, steps down.

His release comes as a political crisis in the Chinese-ruled city enters its second week, amid growing uncertainty over the fate of Lam and an extradition bill she postponed at the weekend after it triggered one of the most violent protests in decades.

“I will join to fight against this evil law,” said Wong, 22, one of the leaders of the 2014 “Umbrella” pro-democracy protests that blocked major roads in Hong Kong for 79 days.

“I believe this is the time for her, Carrie Lam the liar, to step down.”

The crisis escalated during Wong’s five-week jail term for contempt of court. Until this month, the failure of the “Umbrella” protests to wrest concessions from Beijing, coupled with prosecutions of at least 100 protesters, had discouraged many young people from going back out on the streets.

The upheaval comes at a delicate time for Chinese President Xi Jinping, who is grappling with a deepening U.S. trade war, an ebbing economy and regional strategic tension.

Many residents of Hong Kong are increasingly unnerved by Beijing’s tightening grip and what they see as the erosion of its freedoms, fearing that changes to the rule of law could imperil its status as a global financial center.

Hong Kong has been governed under a “one country, two systems” formula since its return to Beijing, allowing freedoms not granted to the mainland, but short of a fully democratic vote.

The benchmark index climbed 0.8%, having risen more than 1% in early trade, outperforming gains in Asia ex-Japan and onshore China. Most tenors in interbank lending rates shortened, after a spike last week during the protests.

The city’s “highly leveraged property owners are breathing a collective sigh of relief, and the Hang Sang is in a celebratory mood as well,” Stephen Innes, managing partner at Vanguard Markets, said in a note.

Protest organizers said almost 2 million people turned out on Sunday to demand that Lam resign, in what is becoming the most significant challenge to China’s relationship with the territory since it was handed back by Britain 22 years ago.

The mass rally, which police said drew 338,000 participants, forced Lam to apologize over her plans to push through the extradition bill that would allow people to be sent to mainland China to face trial.

On Monday, protest organizers said they wanted Lam to withdraw the bill, release arrested students, drop the official description of Wednesday’s rally as a riot, and step down.

Hong Kong opposition politicians echoed marchers’ calls for both Lam and the proposed law to go.

“Her government cannot be an effective government, and will have much, much, much difficulties to carry on,” veteran Democratic Party legislator James To told government-funded broadcaster RTHK.

“I believe the central people’s government will accept her resignation.”

However, the official China Daily said Beijing’s leaders would continue to back Lam, as it lashed out at foreign “meddling” in the crisis.

China’s support for Lam will “not waver, not in the face of street violence nor the ill-intentioned interventions of foreign governments,” the newspaper said in an editorial.

While Lam delayed the bill, it has yet to be completely shelved.

“We cannot accept her apology, it doesn’t remove all our threats,” said social worker Brian Chau, one of several hundred protesters who stayed overnight in the Admiralty district around the government headquarters and legislature.

Some demonstrators cleared rubbish left after the vast, but peaceful, march while others sang ‘Hallelujah’, a gospel song that has become the unofficial anthem of protesters against Lam.

The headquarters will stay closed on Monday, the government said. A group of uniformed police stood by without riot gear, in contrast to their appearance during recent skirmishes with protesters.

Hong Kong police in standoff with protesters after sit-in

Hong Kong cuts taxes to shore up economy amid protests