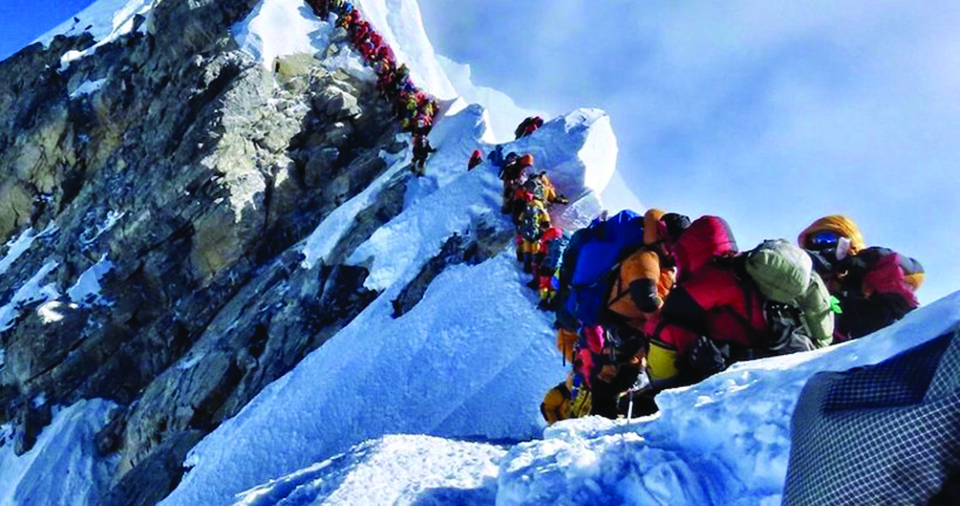 KATHMANDU, June 13: Amid concerns from various quarters that weak laws and poor monitoring by the authorities have made mountaineering unsafe, the government recently formed a five-member panel to identify the problems in mountaineering and recommend measures.

The panel led by the chief of Human Resource Management and Tourism Promotion Division under the Ministry of Culture, Tourism and Civil Aviation has been tasked to study into the nine deaths on Everest this season, besides various legal, policy, structural and procedural issues concerning the mountaineering sector, officials said on Wednesday. The panel has also been asked to make necessary recommendations in consultation with the stakeholders to address the problems and make mountaineering safe.

The panel was formed on June 7 through a cabinet decision in the wake of the deaths on Everest, which have been blamed on overcrowding. But the government rejects overcrowding as responsible for the deaths.

Many have voiced that the government should reduce climbing permits and issue permits only after proper screening of climbers.

“The committee will seriously study a number of issues that have been raised recently as well as various other related issues. I want to make it clear that Nepal government is highly sensitive to all the issues that have surfaced lately and remains committed to making this sector safe,” said the statement issued by the Director General of Department of Tourism Dundu Raj Ghimire.

Although various reports suggested that overcrowding was responsible for the deaths on Everest this season, the government has dismissed such suggestions.

The Department of Tourism, quoting its liaison officers, said that the deaths were caused due to various reasons including altitude sickness, adverse weather, limited weather window for climbing, physical weaknesses and other health-related problems of the climbers.

The department said it had this season issued only 35 more permits than last season and dismissed claims of overcrowding on Everest.