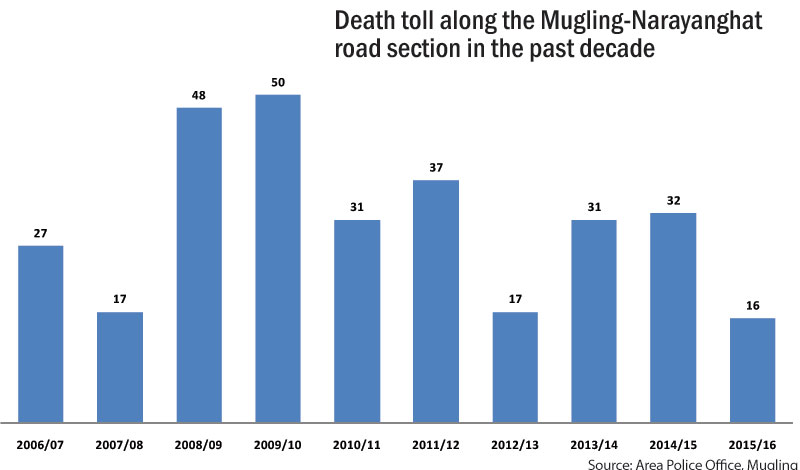 CHITWAN, Oct 1: With Dashain festival around the corner, people's mobility has increased. The only highway that connects both the east and the east to the capital is getting even busier. As buses make their way through the Muglin - Narayangarh road section, fear of accidents and falling into the raging Trishuli River below, sends shivers down their spines. Defending themselves, road engineers and traffic police put forward number of reasons for high accident risks in the road which, they claim, should be addressed to ensure road safety.

“The road was constructed over 40 years ago. There were few vehicles then. Now, numbers of vehicle plying on the road have multiplied. Traffic congestion is the first reason of high rate of accidents on this road,” said Mukunda Adhikari, chief of Road Division Office, Bharatpur. “Size of transportation vehicles have increased but the size of the road remains the same. Look at the size of the truck then and now and look at the size of passenger buses. But you can see that the size of the buses have remained the same.”

Apart from narrow roads, lack of side walls, an essential pre-requisite on highways, is missing along most part of the highway. Sharp and numerous bends is another factor that makes this road accident-prone. And on top of all these poor maintenance has added to the woes. “When you drive through the highway, you can see the river roaring bellowing.

There are no sidewalls to shield vehicles in cases of accidents or slips. Numerous sharp bends along with pathetic road condition has made it wore for the vehicles to ply on it,” Adhikari said.

On Aug 26, 22 people were killed and 16 injured when a passenger bus whirred off the road and fell into the Trishuli River. And nearly monthly after, former home minister and chief secretary Madhav Prasad Ghimire, among others, lost life as the vehicle he was traveling in whirred off into Trishuli.

According to Adhikari, the parapet of the road section from where the vehicle had skidded down on Aug 26 was too weak. The force of the ill fated bus had destroyed the entire parapet and fallen 200 meters down into the Trishuli river. The jeep that was carrying Ghimire had met an accident in the similar site.

Once they fall in Trishuli River, there is little chance of the vehicles ever being spotted again, say locals. And this is the most dangerous thing about the mighty river. “Many motorbikes, jeeps, buses, cars have fallen into the river. It is hard to recover them once the river swallows it,” said a local. He added that few other vehicles had fallen in Trishuli recently apart from 'the jeep of the former home minister'.
Lack of interest in the road repairing has been taking lives, traffic police says. Roads are hardly repaired and the railings hardly replaced when broken. Area traffic police in Chitwan identified 28 most dangerous spots along Muglin - Narayangarh road section and has recommended immediate repairs to the road division office.

Ghimire's jeep had whirred off the road in one of these spots. “We had warned of the precarious situation to the road department long before. But they had nothing to address the security concern,” a traffic police said. Following the accident, iron rod railings have been put at the place.

Responding to the claims of traffic police officials, Adhikari stated that the department has completed most of the repair recommendations forwarded the police. Shiva Khanal, engineer with the road division, however, informed that one of the major task - placing of railing along the road edges, is yet to be done in many places. “Only the work of parapet has been done properly so far. We are yet to place railings. Among 32 such places, railing has been erected only at 18 places,” he said. Except for the work of railing, 90 percent work has been completed, he added.

Remarkably, chief of the repairing project Chandra Narayan Yadav had made commitment to complete the task by 26 September during a meeting held at the District Administration Office. The deadline has crossed but the work has not been finished. For this, Yadav put the blame on the delay in finalizing the design of railings and its endorsement. “The designs have to be endorsed, and it is taking time,” he said.

According to SP Basanta Kunwar, chief of Chitwan District Police Office, negligence of driver is one of the major causes of accidents. Lack of discipline among drivers has been taking their own and passengers' lives, he claims. “There is need of patience and carefulness while driving is such narrow highways. But they often overtake and ride in high speed,” he said.

Engineer Khanal echoed the same view. He stated that a little more carefulness from the side of the drivers could make difference in the number of accidents, he said. “There are few such risky places on the way that drivers cannot be carefree at all. However, they take things casually and continue give rough driving,” said Khanal. Along with the drivers, Khanal conceded that the highway lacked regulatory signboards and signals in most of the hazardous areas.