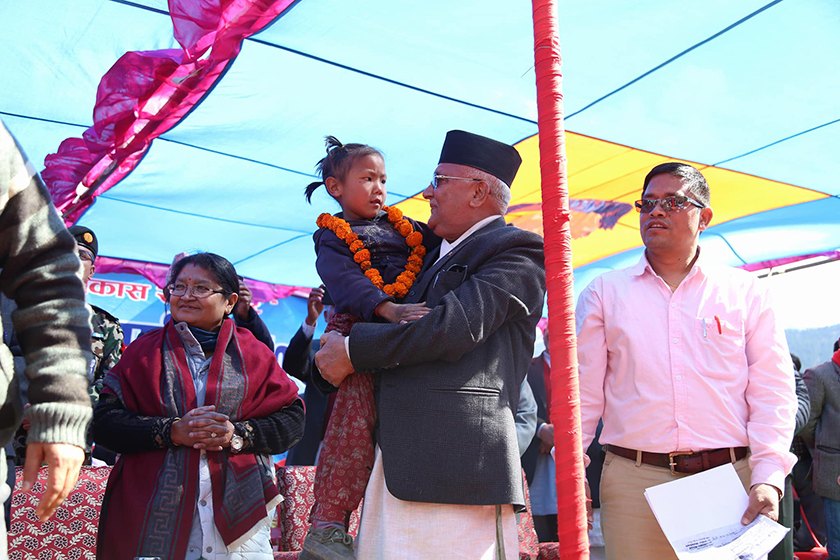 SURKHET, June 8: While inaugurating Karnali-Rara Tourism Year-2075 on the shores of Rara Lake in 2018, Prime Minister KP Oli announced that he would assume the guardianship of eight-year-old Thinle Mangmu Lama, a local child. Later, the PM’s wife Radhika Shakya assumed responsibility for the education of Chhiring Chongjung of the same locality.

Oli’s initiative to make sure children are not deprived of schooling due to poverty was much appreciated at the time, and Thinle went on to top her batch in school in 2018. However, a year or more since Oli’s announcement the funds promised have not materialised. And Thinle has set off on the risky undertaking of collecting yarsagumba in the remote parts of the district to support her schooling.

Last year, Minister for Forest and Environment Shakti Bahadur Basnet announced that he would take up the guardianship of two needy children from his home village in Bheri Municipality-1. He was following the prime minister’s example. Pravesh Rawat and Sharmila BK, the two children, were subsequently admitted in grade one and grade six respectively.

They were promised free education. But Sharmila is currently studying in grade eight at Gyanjyoti Girls School, Mitrapark with financial assistance from CATS Nepal. And she lives in an orphanage. Her mother Bimala claimed that she was compelled to place her daughter in the orphanage as the minister did not provide any support as promised.

“After the minister assumed guardianship I thought she would get a proper education,” Bimala told Republica. But the minister has not contributed anything to that end, she added.

She also spoke sadly about her husband’s untimely death and wondered how she would manage her son’s education. “I have had to send my daughter off to the orphanage... how can I pay for the education to my fifth grader Dipak?” she asked.

Pravesh Rawat, the other child that Basnet assumed guardianship for, is however said to be getting assistance from him. Laxman Rawat, the boy’s father, claimed that Basnet has been sending regular assistance for his son’s schooling. “Minister Basnet sent the school uniform, bag, stationery and other study materials a couple of days ago,” he said.

Former home minister Janardan Sharma also emulated Prime Minister Oli and assumed the guardianship of 15 financially deprived children in Rukum West. Sharma, however, has not provided the promised assistance to the nine boys and six girls, who enrolled in school in the academic year 2018.

She claimed that the children’s home has been facing difficulties as Sharma has not made good on his guardianship of the 15 children. “He should put his money where his mouth is,” she said. “We are supporting the children but Sharma has taken all the credit.”

Sharma has extended only Rs 50,000 in support of the children’s education while the children’s home has already incurred a debt of more than Rs 600,000 on their account. She claimed that about Rs 1.7 million has been spent on them as of now.

Chief Minister of Karnali Province Mahendra Bahadur Shahi said that the problem of educating needy children cannot be solved by assuming the guardianship of a handful of them. “The Karnali Province government is working hard to bring the entire province within the ambit of education,” he said.