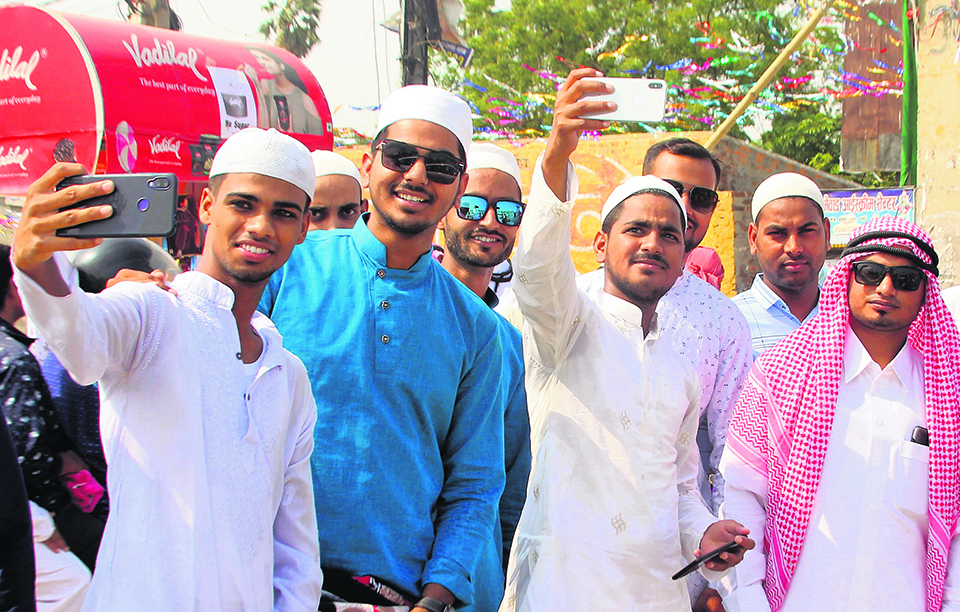 Members of the Muslim community taking selfie on the occasion of Eid in Birgunj on Wednesday. Ritesh Tripathi/Republica

BIRGUNJ, June 6: Thousands of Muslims gathered at a mosque in Birgunj-2, Chhapkaiya on Wednesday morning before 9 am to attend the special prayer on the occasion of Eid.

The imam (priest) held a special prayer which was attended by Muslims of all ages. Eid marks the end of Ramadan, a month-long fasting.

“Believe in Allah, think of your neighbor's sermon as your own, have faith in religion, maintain peace and brotherhood,” the imam said while reciting the holy Quran. Everyone present at the mosque joined the group prayers known as namaz.

After the prayers, the followers of Islam were seen exchanging wishes. Eid-ul-Fitr, which is the most important festival of Muslims, is celebrated to foster love, brotherhood, and harmony. It follows the holy month of Ramadan according to the Islamic lunar calendar when devotees fast for 29 or 30 days, consuming nothing, even water, between sunrise and sunset. After sunset, varieties of meals are consumed. The moon is worshipped on the eve of Eid, and the festival is celebrated the next day.

Ramadan began on May 7 this year and concluded on June 5. Tabrej Ahmed, a local of Parsa Dhobini, said, “Eid is celebrated to let go of a year's rage and accept one another, so it is of utmost importance in Islam,” adding, “It symbolizes love and affection.”

All Muslims bathe on the morning of Eid, and wear new clothes of their choice. Males go to mosque for namaaz, while women pray at home. Everyone donates a certain amount known as zakat (charity or alms) that is calculated according to their earnings. The donation is made to ensure participation of poor and needy in the festival.

Eid was celebrated all over Nepal on Wednesday. Family gatherings were held and special cuisines were served.

KATHMANDU: The Muslim community is celebrating Eid-ul-Fitr across the country on Wednesday. ... Read More...

Today, on the first day of the tenth month (Sauwal) according to the Arabic calendar Hijri, the entire Muslim community... Read More...

KATHMANDU, May 30: Government has announced a public holiday on June 6 to observe the Eid-ul-Fitr, the biggest festival of... Read More...