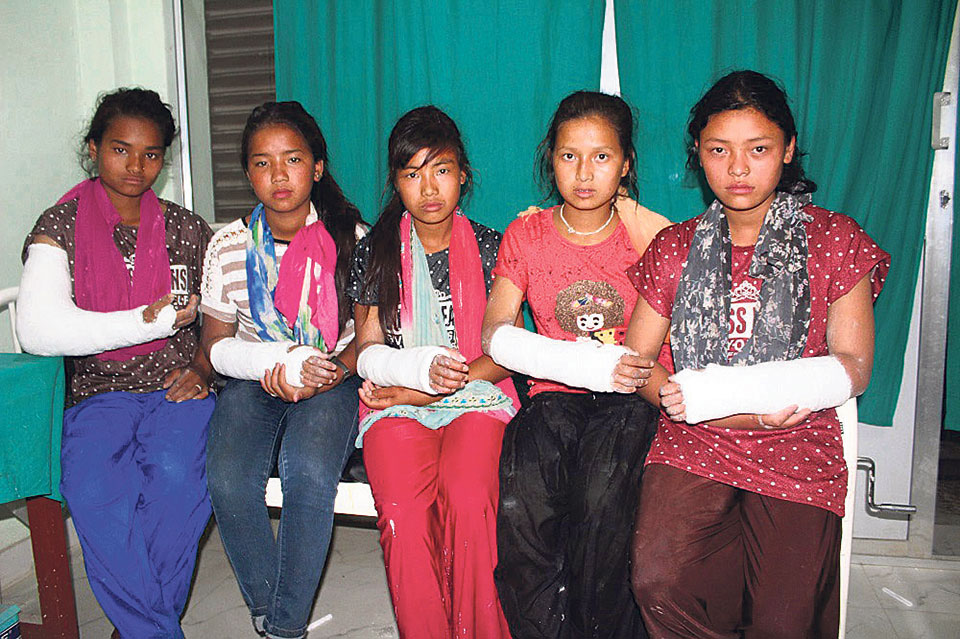 Five schoolgirls with plaster casts on their forearms at a health center in Dang district on Sunday. The girls from Bhanu Basic School in Jhenam of Runtigadhi Rural Municipality of Rolpa suffered arm fractures due to severe beating by their teacher Laxmi Pun on May 26. The children said 14 students were injured when the teacher beat them up with a stick for being late to the morning assembly. One third-grader suffered hearing difficulties, according to the children. Police arrested the teacher on Monday. Photo: Republica

ROLPA, June 4: A teacher of Bhanu Basic School of Runtigadhi Rural Municipality-8 of Rolpa has been arrested on Monday afternoon on the charge of severely beating up schoolchildren and fracturing the forearms of five of them. A total of 14 students were injured in the beating by teacher Laxmi Pun, who had punished the students on May 26 for being late to the morning assembly.

The children said a third grader has suffered hearing difficulties after the  beating.

Following a complaint filed by the parents of the children on Sunday, Area Police Office (APO), Holeri, arrested the teacher.

The five students who suffered fractures in their arms are currently being treated in Dang. Doctors have put plaster casts around the arms of Bhim Kumari Bantha, Nirmala Pun, Gauri Gharti, Shanta Nepali and Bimala Roka.

According to the students, teacher Pun started hitting them with a broken leg of a wooden desk for being late to the morning assembly. Pun is the acting principal of the school. As soon as Pun started charging on the children, other students and teachers could not bear the scene and rushed to their classrooms.

“Our friends were in the assembly when we arrived. Then our teacher (Pun) asked us why we came late and started beating us with the wooden stick before we could speak. Our other teachers could not watch and ran toward the office room,” said, Bhim Kumari Bantha, one of the students suffering from arm fracture.

The students said a third grader Nara Bahadur Pun has suffered a hearing difficulties after being slapped by the teacher. Even though the incident occurred on May 26, it came to light only on Sunday due to the efforts taken by the ward office to resolve the issue.

“We held a discussion and decided to sack the teacher and make her bear all the medical expenses of the students,” said Bhim Bahadur Gharti, ward chairman and chairman of the School Management Committee.

Accusing the ward office of trying to hush up the issue, parents on Sunday had filed a complaint at the APO against the teacher.

“We have expedited our investigations. So, we will make sure the teacher gets stern action if the charges are proved,” said Balaram Budha, chairman of Runtigadhi Rural Municipality.

Meanwhile, DSP Deepak Khadka of Rolpa police said they will take action against the teacher after completing their investigations.

ROLPA, June 3: Fourteen students were seriously injured in a primary school in Rolpa district after their teacher thrashed them... Read More...

Conversation with the teacher

This scribe was informed that Sardaman Shrestha, the sculpture-making teacher at Srijana College of Fine Arts, was everyone’s favorite teacher.... Read More...