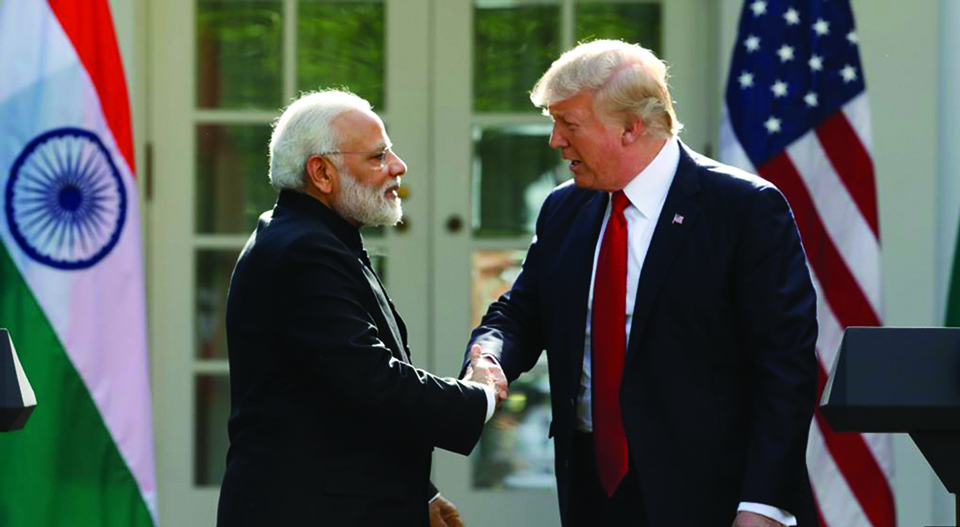 While China braces up for another Long March, with reelection of Narendra Modi, ‘strategic autonomy’ of India tilts in favor of the US, isolating Pakistan and distancing from Russia and Europe

The election dusts have begun to settle and Indian Prime Minister Narendra Modi’s priorities are surfacing one after another from unfathomable deeps of Indian politics. Speculations were abound regarding what Modi would do if and when he comes to power again. Contrary to some expectations, a strong Modi government appears to have chosen to appease the US, isolate Pakistan, balance China and abandon Iran. India may soon host informal meeting between President Xi Jinping and Modi—a Wuhan-2. But string of events foretells lesser warmth and anticipation in this meeting than its forerunner held in Wuhan, China, in April, 2018. The “strategic autonomy” of India appears to have tilted in favor of the US, distancing itself from Russia and China and Europe that are struggling with Trump’s tariffs and embargo-laden eccentric foreign policy.

After pulling out from Iran Accord, US President Donald Trump aimed to cut the export of Iranian oil down to zero. Iran’s economy would be shattered if it cannot export its oil. India had told Iranian Foreign Minister Javad Zariff that final decision would be given after the election. The very first announcement after Modi’s victory declared that India would not purchase oil from Iran. This decision created a ripple of shockwaves to Europe which was looking toward India and China for bailing out Iran from US embargo. The nuclear deal was signed by Britain, France, Germany, China, Russia and the US in 2015 and was hailed as one of the biggest foreign policy achievements of the West that would check Iran’s nuclear ambitions. But expressing dissatisfaction with Iran’s ballistic missile program and its involvement in the Middle East, the US pulled out of it in 2018. The five remaining countries, however, stuck to the deal and were hoping against hope to “compensate for US withdrawal, protect trade and still prevent Tehran from developing nuclear bomb.”

In the high tide of Indian election, China had consented to remove its longstanding hold on listing Jaish-e-Mohammed led by Masood Azhar as terrorist organization by the UN.  Some analysts have construed this consent as an election gift to Modi. Only a few days earlier, Indian foreign minister Sushma Swaraj’s plea for extension of US waiver (for purchasing Iranian oil) was dismissed summarily by the US secretary of State Mike Pompeo. It was a tight spot for Modi who was fighting an election marred by poor economic performance.  US refusal could increase pressure to hike petroleum price and tip the balance of election in favor of Modi’s opposition.  Therefore if Chinese consent was a gift, it was an undoubtedly a priceless gift. Modi lost no time in capitalizing on this gain rallying the voters around his Twitter messages and speeches. In return, China might have expected India to stand together for the purchase of Iranian oil, since China had openly said that it alone would not be able to deal with Iran oil crisis. Chinese newspapers were also upbeat about the prospect of Modi’s victory. Some were euphoric that with resolution of Azhar issue, a strong Modi could even be positive toward Belt and Road Initiative (BRI).  But such hopes did not last long.

After about a week of UN listing of Masood Azhar, India participated in the joint-military drill with the US, Japan and the Philippines in South China Sea. It was a show of strength directed against China. It was understandable that such moves were most likely motivated by a desire to fan electoral nationalist sentiment by the show of muscle against China, as was the military engagement with Pakistan. Earlier, India had taken a cautious step in dealing with ‘Indo-Pacific Strategy’ arguing for inclusion of China and avoiding QUAD military drill in Bay of Bengal. But this latest development in South China Sea was a gloomy sign casting its shadow on China-India cooperation in international issues

As it turned out India opted to comply with US demand and stopped purchasing Iran’s oil. On India’s heel, China also backed from buying Iranian oil, but a tanker ‘Pacific Bravo’ carrying Iranian oil to China is being watched as a global hot spot. Japan, Turkey and South Korea, Taiwan, Italy and Greece had already stopped doing so within the deadline of US waiver. Countries  jumping one after another  off the sinking Iranian ship, in spite of Russia’s appeal to not to do so, heralded one more victory of President Trump’s trade war. But the situation is more complex than meets the eye.

Embargo on Iran is a double-edged sword that would not only devastate Iranian economy but also may drag US and Europe economy to recession and create conflict in the Middle East. The big Asian economies like China, India and Japan would not be left untouched. In the wake of Iran revolution 40 years ago, the reduction of Iran oil supply had caused only four percent decrease in global oil output but generated shockwaves and panic with price hike.  In 1980, reduced oil production due to Iraq-Iran war had triggered economic regression in US and other countries. Current row over Iran oil is certainly emerging as a grave political and economic crisis that could lead to collapse of Iranian economy but also set the stage for a global recession.

Signs are clear. Europe’s helplessness in saving Iran Accord, countries stopping purchase of Iranian oil, Iran’s ultimatum of 60 days  to abandon the Accord and threat to shut the strategic Strait of Holmuz, attack on oil tankers of Saudi Arabia and United Arab Emeritus, increase of oil price in global market, and fear of war. President Trump’s hawkish hardliner national security advisor John Bolton is accused of pushing US toward war with Iran. However, media have reported a noticeable shift in Trump’s comments during his recent visit to Japan. What is it that is prompting US president to speak against his security advisor Bolton, softening a bit his views about Iran?

The statement of Shia-majority Iraq’s foreign minister Muhammad Ali al-Hakim on May 26 supporting Iran, during the same time as Trump’s visit to Japan, appears to be the game changer. “The sanctions against sisterly Iran are ineffective and we stand by its side,” Hakim said. It appears strange that when many Goliaths have deserted Iran, a David would hold its ground. US presence in Iraq may be vulnerable in Shia-dominated areas of Iraq and American people would hardly approve another US-Iran-Iraq war.

Another factor could be the development within China itself. The patriotic sentiment against US highhandedness is palpable everywhere in China. Pushed to the wall, Chinese position in the trade negotiations have also hardened, reducing the possibility of a mutually acceptable deal. President Xi Jinping has symbolically visited the place Jiangxi from where Long March had began, a gesture which the Chinese people have understood very well. It is to get ready for all kind of hardship for another long drawn out struggle: A protracted trade war. “We are now embarking on a new Long March, and we must start all over again,” Xi has said. “China has never feared anyone. History will prove again that bullying and threats by the US will not work,” says Xinhua news agency in one of its reports.

In fact, three cards for Chinese victory in trade war have been forwarded: Using Chinese possession of one trillion dollars US Treasury bond to accentuate US national debt, stop selling rare earth material (vital for chip making) to the US and shutting Chinese market to US compradors. Chinese economists’ calculation of the cost of trade war on Chinese GDP (1.2 percent) and assurance that it would not destabilize the Chinese economy is also noteworthy here. If these signs are telling anything, it only says that stopping Iran oil purchase is only a temporary and tactical ‘time buy’ move of China which will resume again in appropriate circumstances. There lies the importance of the tanker Pacific Bravo.

On the other hand, India risks losing Iran if it does not play its cards well.  Iran is a long time friend and an extremely important strategic country not only for oil but also for North South Transport Corridor that joins India with Russia and India with Central Asia through Afghanistan using Iranian port of Chabahar. India also apparently gains from the escalation of trade war between US and China. Indian companies are excited about the prospect of selling both to China and US, the products that these countries may not buy from each other. Such gains, however, are small compared to the conflict that may ensue between India and China and to the prospects of synergy if these two economies cooperate.

China and India could still play an important role in forging dignified solution to Iran crisis. It depends on whether India also fastens up its belt to go the distance with a sturdier strategic autonomy.

Rise of a common man

People found in Modi a person they could relate to. When he named himself a chaukidar, the guard of the... Read More...

25 youths felicitated for their inspiring achievements
22 hours ago

Is it safe to ride public transit during the pandemic?
20 hours ago

Institutional childbirth reduced by more than half during lockdown in Nepal: Study
3 hours ago