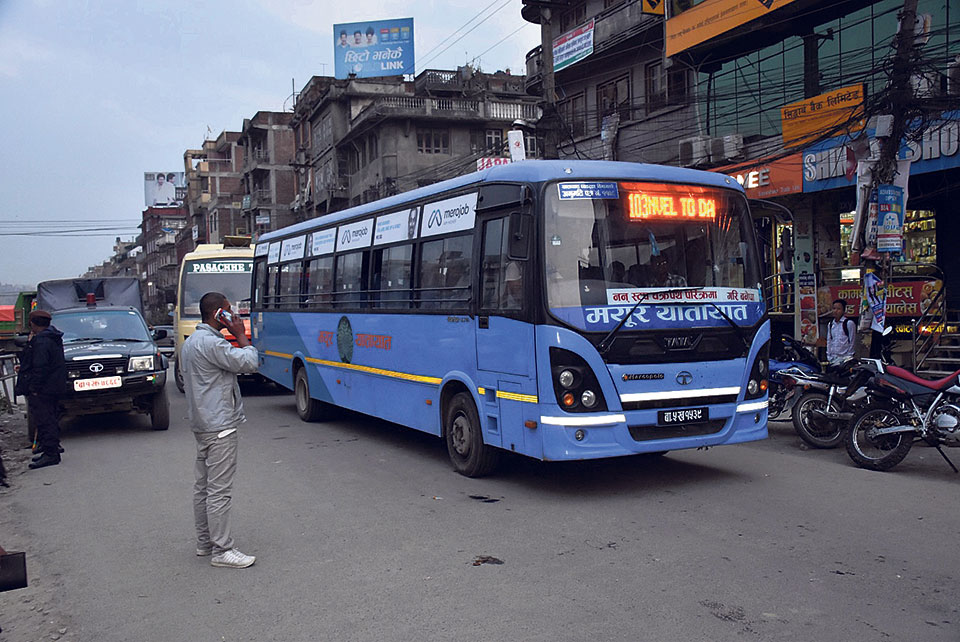 A bus of Mayur Yatayat which had entered the Banepa route as the first competitor to local syndicate. This company has been a major factor behind the government’s decision to remove transportation syndicate from the country. Photo: Republica

The first committee of Kavre, Kavre Transport Entrepreneurs Association, has been registered under the name of Kavre Bus Private Limited. Under this company, all the buses have been running from Dhulikhel to Kathmandu.

Likewise, Kavre Minibus Service Committee, which has been operating on the Panauti-Kathmandu route, has registered under the name of Kavre-Punyawati Transportation Private Limited.

“I have already got the PAN number,” said Rajendra Sundar Sanju, chairman of the company.

“We also registered ourselves as company. But other industries and our industry are different. The ones registered as companies receive government facilities, but we are not sure if we receive such facility or not,” said Aatma Ram Thapa, chairman of Ganesh Himal-Terai Company.

Earlier, the buses and jeeps under the committee had been running their services in 51 routes including the areas beyond Koshi and Palanchowk, Panchkhal, Deupur Mandan, Nala, and Panauti.

“However, after the registration under company act, the companies might not go to the remote routes,” added Thapa. “Most of the routes in Nepal are remote and not blacktopped. If there is no profit in these routes, the services may be stopped. Earlier we were compelled to run to all kind of routes as we operated under committee. But companies will not be compelled to go to difficult routes,” he said.

MAYUR IS THE GAME CHANGER
The transportation entrepreneurs that had been running monopoly in the Kathmandu Valley and Araniko Highway see Mayur Transportation as the only challenge for them. They feared that if they could not stop Mayur, and other buses could also come to compete with them.
With Mayur, other companies including Sajha Yatayat and some other bus operators did enter the market.
“However, the ones which have been converted into companies have not been able to accept healthy open market competition,” he said.

KATHMANDU, Oct 4: The Department of Food Technology and Quality Control (DFTQC) has sealed two beverage companies based in Banepa of... Read More...

BANEPA, Aug 15: The death toll  in the Kavre bus accident has reached 31. Preparations are being made to airlift... Read More...