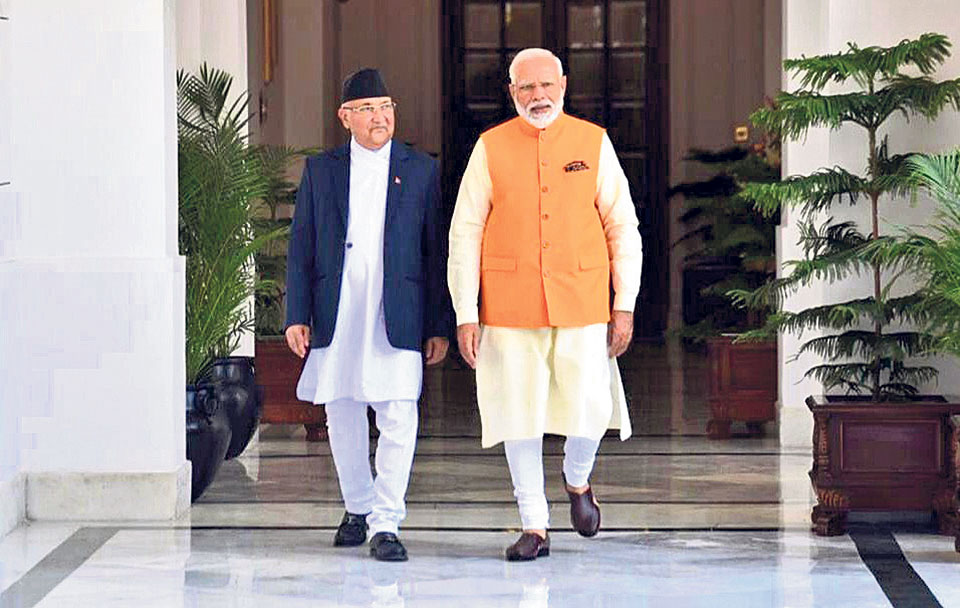 By working with the government in our southern neighbor, the Oli government can bag in more investments for its development projects and help our economy

‘Aab ki baar tin soo paar!’ – This time beyond the three hundred mark. Indian Prime Minister Narendra Modi told his party workers while campaigning for the general elections earlier this year. The promise was delivered. Bharatiya Janata Party (BJP) won 303 seats out of 543 and the BJP-led National Democratic Alliance won 353 seats in the 17the Lok Sabha elections, held in seven phases from 11 April to 19 May 2019. He is the first prime minister outside of the Indian National Congress to win two consecutive terms with full majority and the second prime minister to complete five years in office after Atal Bihari Vajpayee, another BJP leader.

Born to an ordinary family in Gujarat, Modi, during his early political career, made an impact as a future leader of the world’s seventh most populous democracy to the then BJP Chair Vajpayee. It is believed that Vajpayee himself asked Modi to become the chief minister of Gujarat. And it paid off. Modi made Gujarat a model state of the Republic of India—This was a major factor behind his sweeping victory in 2014 Indian General Elections. Under his leadership, BJP became the first single party to obtain a majority in the Indian lower house, Lok Sabha, since 1984.

Modi’s charisma denied the Indian National Congress, led by Rahul Gandhi and its allies, a dominant position in the opposition. The Indian National Congress won just 52 seats, and the Congress-led United Progressive Alliance won 91. The landslide victory has pushed the opposition parties to less than 10 percent (55 seats) in the Lok Sabha, making the lower house without an official opposition party. Despite, strong campaigning and alliance against the BJP, the Modi magic prevailed.

PM Modi has established himself as a powerful leader, at least for the time being. Modi  is looking beyond his borders to extend India’s influence. Inviting BIMSTEC leaders to swearing-in ceremony was a nod to his leadership in South Asia and beyond. His victory has been swiftly welcomed by world leaders, including the United States President Donald Trump, Chinese President Xi Jinping and Russian Prime Minister Vladimir Putin, among others.

The spell that worked
Besides his influential speeches and charismatic leadership, analysts have attributed the sweeping victory to some of the works during his first tenure as PM. One of the most crucial decisions that Modi took after assuming office in his first term was demonetizing 500 and 1000 rupees note. Aimed that removing black money from circulation, it handed a major blow to black money, counterfeit currency. But in doing so, he put his position on the line as it resulted in severe cash shortages and a sharp decline in Indian stock market and unemployment increased. But as the immediate impact faded, the move paid off with the number of income tax returns filed by individuals rising by 25 percent the next year. His first four years saw India’s GDP growth at an average rate of 7 percent higher than the previous governments. Modi’s vision and mission of transforming India worked. And the voters could see this tangible impact. Poverty reduction program, tax reforms initiative and economic liberalization gave him support from Indian’s almost all quarters.

Namo 1.0 and Nepal India Relationship
Modi’s foreign policy has focused on the idea of ‘neighborhood first’ policy. His first official state visit after becoming PM the first time around was to Nepal in 2014. Since then, he has visited Nepal four times, taking the India-Nepal bilateral relationship to greater heights. After winning the elections for the second term, Modi has vowed to continue cooperation and assistance to Nepal government’s goal of development and prosperity.

Like in the previous term, Mod invited the leaders of BIMSTEC, including Prime Minister K P Sharma Oli to his swearing-in ceremony in New Delhi. This is a clear message that India’s neighborhood first policy remains his top priority. Along with the neighbors, the swearing-in ceremony is being attended by the BIMSTEC heads, which denotes Modi’s ambition to increase India’s role and influence on the world stage.

Modi resolved and is trying to resolve various diplomatic issues between Nepal and India, including border disputes and distribution of resources.  His promises to back Nepal’s journey toward the path of development have been functional. Construction of long-stalled hydroelectricity projects have been expedited. Railway linkages across the borders have been expanded while work on building railway network linking Raxaul with Kathmandu is being done. Direct bus services between Kathmandu and New Delhi have further increased people-to-people relations. Both the countries have moved ahead toward building a relationship based on mutual growth and prosperity.

Namo 2.0 in relation to Nepal
A stable government at home and in the neighborhood is by far the best thing to happen for Nepal after many years. Given Modi’s willingness to move ahead toward mutual growth and prosperity, it is very crucial for us to expedite the implementation of long and short-term development projects. In his first tenure, the Modi government has worked extensively on bringing stalled projects into implementation. The Oli government should now further their implementation by working closely with the bureaucracy.

Indian investment is Nepal has increased. Nepal has secured investment for Arun III hydroelectric project and expects to attract further foreign direct investment (FDI) by offering attractive incentive packages in terms of corporate taxation, import duties, and export facilitation for foreigner investors and assuring an investment friendly environment. By working with the government in our southern neighbor, the Oli government can bag in more investments for its development projects and help our economy.

Since coming to power, Modi has always stressed on the power connectivity and cooperation for achieving a prosperous neighborhood. And during his second term, which of course is starting off with even greater maturity in terms of policy and experience, Nepal government should work closely in realizing the goal of a prosperous and happy Nepal.