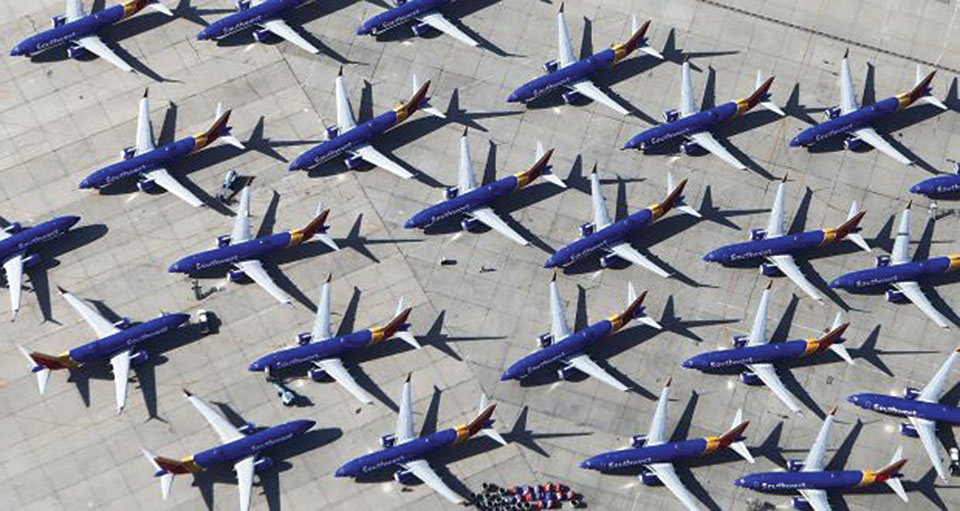 Nothing could be worse for an airline or an aircraft maker if circumstances lead to groundings of their fleet. Aircrafts are made to fly, not to sit idle. In fact, it costs money even to keep them on ground. Airlines work endlessly to make maximum use of the fleet they have. But it is no surprise that RA is seen to suffer first, for being slow in making efforts to increase its fleet utilisation and second, in failing to move away B757 it has opted to ground. Both 757s still sit occupying constricted TIA space. As we understand, the second B757 is still flyable but the first that was sold off, still stays put. As is known, Jet Airways (9W) went belly up in mid April causing major upheaval in the Indian aviation scene. Given its overall poor status RA was seen again unable to capitalize on the opportunity created by Jet’s stoppage. Would it not have been possible to use the lone B757 to fly sectors vacated by 9W?

Generally speaking, aircrafts that fly are not necessarily always “fully operational” in every respect possible. Flights can be performed even with glitches, if those do not endanger flight safety. As a safety measure, airlines maintain “minimum equipment list” (MEL) which dictates if the aircraft can be allowed to fly or not. More formally, MEL provides for the operation of aircraft, subject to specified conditions, with particular equipment inoperative as prepared by an operator/airline. In this piece, we will talk about latest development on high profile grounding of B737Max8 that was most unexpected for a new breed of aircraft and well beyond the realm of regular reason for groundings. As the background story was adequately dealt in my earlier writings, I will not get into it.

Regarding Max8, though reluctant to admit its oversight first, Boeing in a statement has finally admitted there was a design flaw in software linked to the B737Max8 blamed in large part for the Ethiopian Airlines tragedy. Making corrections to the simulator software, it has also provided additional information to device operators to ensure that the simulator experience is representative across different flight conditions. Needless to say, FAA suffered its worst image crisis following the two accidents. It was seen as an agency that endorsed whatever was brought to the table without as much as a glance. Putting bluntly, understaffed and inadequately funded, FAA looked more like any governmental organisation in any third world country! Boeing, with its top notch technical manpower and billions of Dollars stacked in its deep pocket was affluently powerful to have its way as it pleased. This was further compounded by Boeing’s need to rush Max to catch up with A320neo, stealing orders right under its nose.

Over and above FAA’s recertification, Max needs to be endorsed by the flying public. How comfortable will anyone be getting into one is the question? It would surely be difficult to assure the sceptics even with FAA’s endorsement. But, FAA is seen to be doing just that as one of its top official said in a recent statement: “As all of us work through this rigorous process, we will continue to be transparent and exchange all that we know and all that we do—to strengthen the public’s confidence that the aircraft will meet the highest safety standards.” It is certainly well said now, one that was not practiced in reality, at least not in case of Max.

That aside, FAA re-certification needs to be matched by other global aviation regulators, EASA in particular. Jolted by FAA’s laxity, countries like Australia and Canada will surely conduct their own certification after FAA does its part. As a competent agency EASA appears more as an adversary, but even so it cannot just refuse to certify without citing valid reason. Who knows future Airbus product might end being much like in the same boat requiring FAA’s nod then. As for the general public, most do not care the type of aircraft they are booked to fly or have just flown. Once it gets re-certified, Boeing will need to placate airlines caught inadvertently in this imbroglio. It may have to agree for some sort of compensation for groundings and loss of business. Bloomberg has estimated it might cost Boeing about 1.4B$ doing so, others estimate it at low as 100M$ a month. The grounding has affected a total of 387 air frames with China alone having about 100. Record shows they were delivered to some 50 big/small operators worldwide. It is guessed airlines spend about $2000 per frame a month in regular up keep of grounded frames. And there are more than 100 or so factory fresh ones that remain undelivered.

Boeing is well placed to placate all genuine grievances to get the blemish off its brand. Once that is done, it will then have to ensure if over 5000 Max orders it had received in the past is still intact. It may have no problem with production for at least a decade or so even if there are no new orders. All depends on how well the anticipated re-launching estimated to be between August and October this year is received by the flying public.

But there are two sets of views as regards re-launching. One set seem to be okay with fly now and get the necessary simulator training with upgraded software during their next sitting due, later. Others want to have it before getting into the cockpit. This might be more problematic as there are not as many simulators as yet to cater to the bulk of pilots opting for immediate sim sitting. There is no doubt that flying public will be more comfortable flying with those who already had the sim sessions. If the public wants it then there is no way an airline can overlook this. Given the inherent doubt, being cautious is more sensible or as in conventional wisdom “better late than never”.

The Indonesian Lion Air which had the first MAX8 crash had openly said it was cancelling the orders worth 22B$ as public has lost faith in it. Boeing had laddu in both hands as Lion Air was the first Asian airline to commit an order for the Max8 and was subsequently the launch customer for its next derivative the Max9. The ultimate test of Boeing’s effort will be reflected on how Lion Air reacts. Will it steadfast stick to the proclamation or succumbs to lavish offers Boeing is sure to make. But we have not heard much about compensation aspects for families of crash victims except that some law suits have been filed in US court against Boeing. While the basic responsibility for paying the legitimate amount to the families falls on the shoulder of particular airlines involved, it may be prudent for Boeing to reach settlements with families of all 346 including our Ekta Adhikari, who happened to be in the Ethiopian flight. This offers a tiny bit of hope that Boeing might eventually take measures to address this issue as well. Court settlements in US do not come cheap and perhaps Boeing knows it better than anyone. Off the court settlements with families of victims will be a sincere public relation exercise which might do much more than all of Boeing’s efforts in winning back the trust for B737Max8.

We have complete dislikes for long routes and it cannot be anything but natural to take shorter ones where possible... Read More...