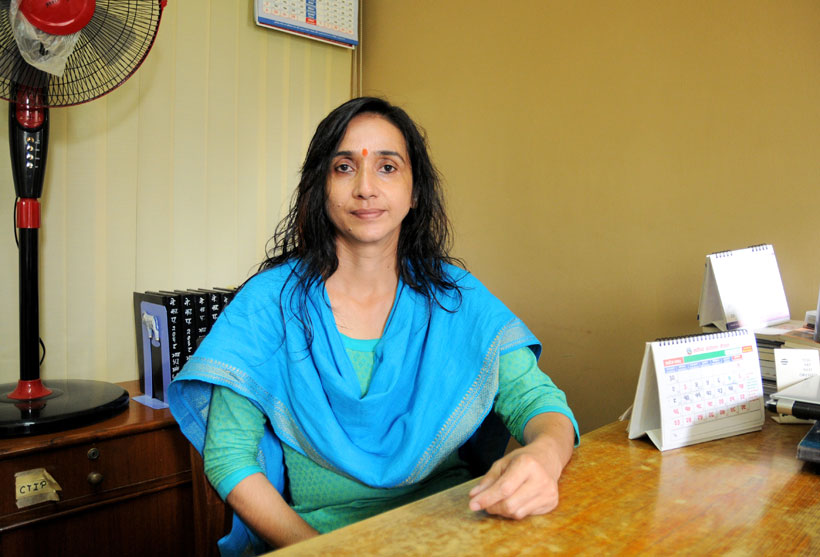 The records at the Naxal Police Headquarters show that in the fiscal year of 2072/73 BS, there were 834 complaints filed by men from across the country for domestic disputes. These said domestic disputes cover a wide range of cases from verbal abuse, extra martial affair allegations, property disputes to even physical altercations. DSP Rabindra Regmi from the Teku branch also confirms that he comes across numerous such complaints from men on a daily basis. However, when asked about the number of ‘domestic violence’ cases that have been taken to the court by men, DSP Regmi takes a moment to consider.

He then voices a genuine concern, “Does our domestic violence law even consider men as victims?”

Despite the significant number of domestic disputes complaints, this seems to be a legitimate question that deters Nepali men from considering the legal recourse. Apparently majority of the male victims’ quest for justice end with a little counseling on the police’s part as court is an option rarely entertained in these cases.

So regardless of being identified as a patriarchal society, could it be that our laws are largely biased towards women in some circumstances? Priyanka Gurung sat down with Advocate Sushma Gautam to discuss the matter.

First of all, have you personally handled a domestic violence case for a male victim?

In the 20 years that I have been practicing law, there was only one time that I came close to taking on such a case. My colleagues and I frequently deal with domestic violence issues but so far, the victims who come to us are always women. But as I mentioned, there was this one instance where a husband claimed to have his rights violated by his wife. Since his marriage was on the rocks, he claimed verbal, psychological and mental abuse. His wife had also threatened to take away their children. It looked like a legitimate case on the husband’s part so we agreed to carry on the proceedings and file a case against his wife. However, while carrying out further investigations, we found out that the husband wasn’t exactly innocent either. His actions, to a large extent, had influenced his wife’s decisions. So after consulting with my seniors, we decided to drop the case.

Ever since then, I haven’t heard of a man claiming to be a victim of domestic affairs of any sorts in the court. I believe neither have my colleagues.

It seems men choose not to pursue these types of domestic violence cases because the general suspicion is that our law doesn’t regard them as victims. What is your take on this?

As practitioners, we are obviously well aware that men can also be victims of domestic violence. I think most of the public is conscious about this fact too. So it isn’t that our law has ignored to define them as victims. I believe the problem here is that men who may be in this sort of predicament aren’t coming forth. We haven’t had any applications presented by a man citing threat to his emotional, mental or physical well being because of his spouse or partner.

If a man were to claim that he has been mistreated or abused, I highly doubt the court will deny them. There aren’t any provisions in our system that can be solely enjoyed by the women but not the men. Further, if somebody was to protest that another reason may be the degree of difficulty for men in collecting proof for their cases, I can assure you that it is just as tricky for women.

Thus I feel 98 percent of the times, the real reason for men to not pursue these types of domestic violence cases is their male ego. In our society, men are often seen as the one who exercises more power and control in a relationship so their ego doesn’t allow them to confess. Rather than collect evidence, they choose to hide the fact that they are being victimized.

But for example, while Nepali women can directly approach the court to file for divorce, law dictates that Nepali men can’t. Similarly, there isn’t any provision that protects a man in Nepal, if he were to be sexually assaulted. In this regard, don’t you think, some of our laws are discriminatory against men?

If there are advocates reviewing our existing laws to ensure women’s rights, believe there are groups who are keen to make sure men’s rights aren’t neglected in the process. Writ petitions and Public Interest Litigation (PIL) are frequently issued for provisions that advocate or right groups believe need to be amended for the public interest. Thus the examples that have been cited have already been requested for revision.

In fact, a PIL has been filed against this specific divorce clause three times over the years. Though the initial two attempts were not entertained, the court did ask the law to be amended the third time around. However, the last time existing gender discriminatory provisions were vitally reviewed, the topic of divorce didn’t come up.

The authorities still clearly believe that the logic behind allowing women to directly approach the court and file for divorce still applies. Nepal is still a patriarchal society and the way it functions makes the women more vulnerable than men in this scenario.

Where rape cases are concerned, currently those involving minor boys are filed under child abuse, but again we are yet to see a male adult come forth with this issue in court. So basically our law does believe that taking the male anatomy into consideration, it’s only the women who can be a victim of rape.

So there are still some lapses in our legal system. How can we move forward and ensure that the existing provisions are fair to all genders?

The first step is to bring the cases to the court. Provisions and laws can’t be made for scenarios and issues that ‘might’ exist. If there were more cases of domestic violence and sexual assault against men piling up at our offices, the court would have no choice but to work on building stronger laws and more precise definitions of violations to ensure the male victims’ rights and dignity. However, despite catching scandalous stories of such cases every now and then, we don’t see any evidence of it in our courts. There are so many cases that aren’t processed. I understand many find the legal process very tedious and lengthy. Some may even question its efficiency, but either way the justice system is the only way to fight this properly.

Didn’t this issue of gender discriminatory provisions ever personally bother you? Are there other laws that you believe need to be reviewed because of their biased nature towards women?

If you are suffering from injustice in any way, being mistreated or abused, regardless of whether you are a male or female, you have the right to seek legal actions. That’s what I believe in and as an advocate, I’m obviously always willing to help them.

At a quick glance, it may seem that our country has many laws that support women but the scenario isn’t that simple. Though the motive to help women achieve equal rights in our traditionally patriarchal society is there, we don’t have the mechanism to implement these laws yet. I’m speaking from experience here. Whether she is fighting for her share of parental property or trying to convict her rapist, a Nepali woman still has several procedural provisions that stand in her way.

KATHMANDU, June 28: The government has endorsed a 'Legal Defense Directive 2075 BS. The meeting of the Council of Ministers... Read More...

KATHMANDU, April 24: A meeting among the government representatives, office-bearers of the Election Commission of Nepal (ECN) and Federal Alliance... Read More...

KATHMANDU, Dec 17: A parliamentary panel working on a bill to replace the Civil Procedure Code has proposed a new provision... Read More...