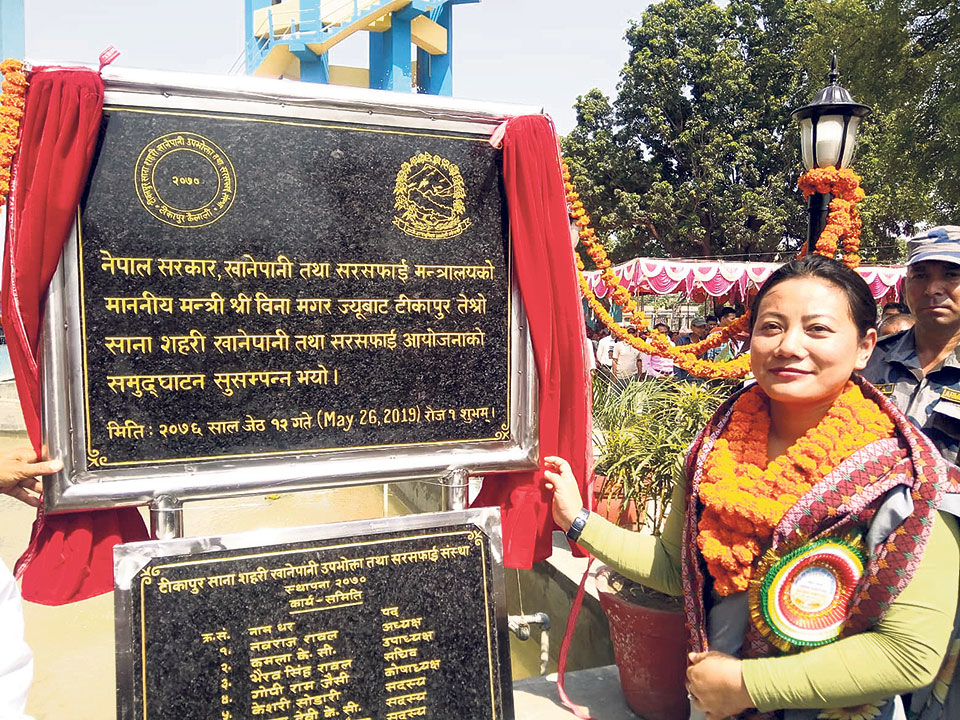 TIKAPUR, May 27: Locals of Tikapur have demonstrated that the participation of consumers' committee can help expedite projects of vital importance to the public.

Due to the active participation of the consumers' committee, the third Small Town Drinking Water and Sanitation Project (STDWSP) in Tikapur was inaugurated on Sunday.

Speaking at the inauguration, Minister for Drinking Water and Sanitation, Bina Magar, said that the Drinking Water Consumers Committee is the bridge between the citizens and the government to execute plans and projects.

"Consumers' committees have played the role of a bridge between us," said Minister Magar, adding, "This has been a great help for the government."

Rana Bahadur Rawal, a leader of the main opposition Nepali Congress (NC), praised the locals of Tikapur for spreading a positive message by completing the project on time. This project is a matter of pride for the locals here.

Nawaraj Rawal, chief of the STDWSP, Tikapur, honored construction supervisor Jhola Prasad Chaudhary, who is an engineer by profession, for playing a pivotal role in completing the project on time.

This project which kicked off in 2015 with the objective of supplying water to 55,750 consumers round the clock has completed the construction of four tankers with capacity to store 1575000 liters of water. Currently, 6,336 people have been benefitting from the project. So far, 5,801 consumers have installed water taps in their homes while others are in the process of fitting taps.

A total budget of Rs 780 million has been invested in the project of which the consumers had to bear 5% of the cost. Reportedly, 25% loan was taken from the Municipal Development Fund while 70% grant was provided by the Asian Development Bank.

Eight injured in bus accident in Baitadi
20 seconds ago

Weather expected to improve gradually from Friday
51 minutes ago