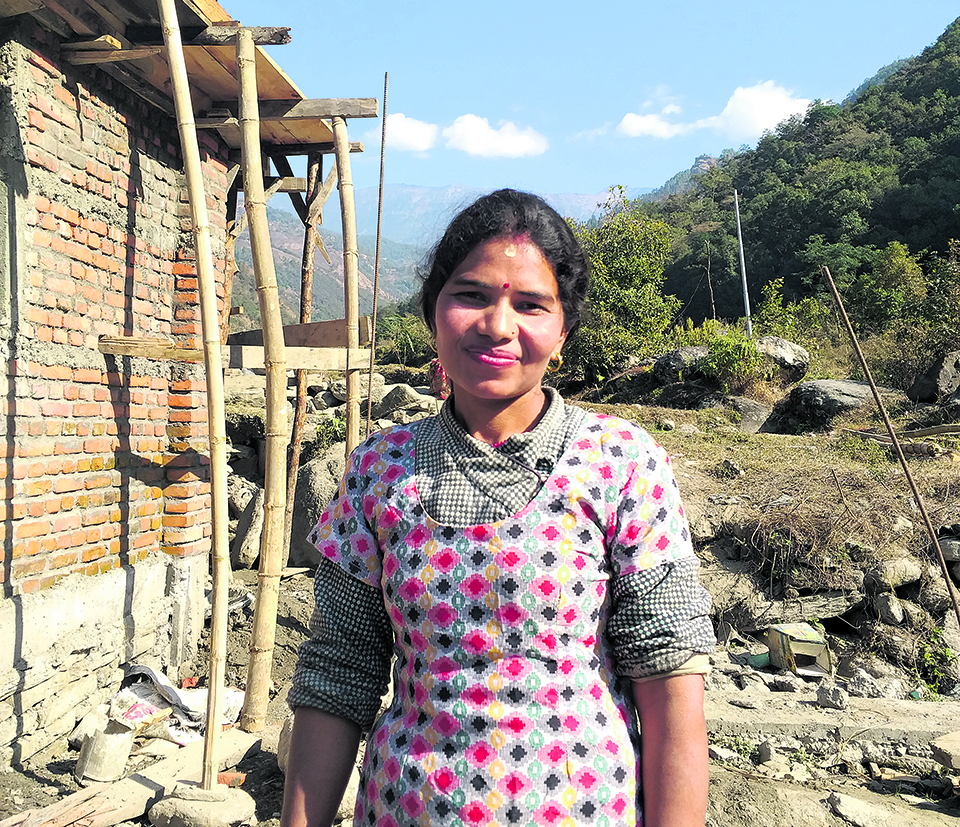 Not much remains of the traditional Nepali architecture due to haphazard reconstruction after the 2015 earthquake. Most of the village houses that were destroyed have been rebuilt into new concrete structures, which, unfortunately, lack the charm of the older houses made of stones and mud.

In a recent tour to some of the earthquake-affected villages in Sindhupalchok district, we found that locals were compelled to make brick-concrete buildings in lack of support for preserving the traditional style of housing. Nepal Reconstruction Authority and other government agencies did not do much to encourage the villagers to build houses using their local materials or skills. Instead of the indigenous materials such as stone and wood, they had to use cement, bricks, and iron rods ferried to the districts from distant places to build their tiny family houses.

“All of it could have been better planned. But our policymakers didn’t spend much time mulling over it,” said Laxmi Narayan Parajuli, an expert in earthquake-resilient construction technology. “You don’t have to build a solid concrete house to fit a small family. There are other ways to make it safe while keeping the traditional architecture intact. We missed the opportunity to preserve our villages. I feel this is nothing but failure on a policy level.”

It cost them two things – first, money and second, the originality of their villages. They also had to spend more money than they received from the government in building those concrete houses, and the villages lost the charm they had due to their own uniqueness. The locals thought that the concrete would make stronger houses, and that they would get the government money only if they built those structures.

“It’s not true that houses built of stones and mud are weak. Many concrete houses too collapsed in Kathmandu,” added Parajuli. “Our traditional structures were strong, as we can see from the buildings of the valley that have endured many disasters over the centuries. We failed to carry our knowledge forward.”

Parajuli mentioned that Araniko, an architect from Kathmandu, went to Lhasa to build houses and temples in the 13th century and that those buildings are still standing in China even today. “In the valley, we still have the Pachapanna Jhyale Palace in Bhaktapur. There are hundreds of temples and houses in the valley that are still safe,” he added. “We just couldn’t transfer our own traditional technology to the new generation.”

Parajuli was instrumental in helping the villages of Sindhupalchok rebuild after the devastating earthquake. However, he confesses that he was compelled to go with the concrete structure despite his wish due to the policy that was implemented.

His organization, School of Shelter and Environment (SSE), went to different villages of Gorkha, Sindhupalchok, Dolakha, and Nuwakot to train local people in the art of masonry to build earthquake-resistant houses. The organization trained local people as “mobile masons” who could then travel from place to place and help people build safer houses. It also mobilized engineers and worked with community volunteers to encourage the villagers to build safer houses and facilitate their work, including paperwork, with the concerned agencies to get the housing grant of Rs 300,000 from the government.

The good thing is that the efforts have paid off. In the past year and a half, 90 percent of the damaged houses have been rebuilt. It was a startling five percent before that. The number rose from 847 to 18,125 houses in 15 wards of 15 erstwhile VDCs of Sindhupalchowk district. Parajuli himself has trained more than 1,000 masons in Gorkha and Sindhupalchok districts. In Sindhupalchok, 178 trained masons work as mobile masons, who have been directly involved in the reconstruction works. With each mobile mason serving almost 150 households, Parajuli estimates that over 20,000 households have been benefitted in the district in the past one and half years.

“If these mobile masons had not worked in the field, and if the community mobilizers had not facilitated work with the local bodies, rebuilding of houses in our villages would have taken much, much longer,” said Bam Bahadur Tamang, chairman of Ward-2 of Barhabise Municipality (erstwhile Karthali VDC).

“These people who would go to the Gulf countries for lowly-paid hazardous work have been retained in the villages after the mason training. That is another good aspect of these reconstruction efforts,” added Bam Bahadur.

Tulku Tamang, 63, of Irkhu-8 (now in Chautara Municipality) said that if he hadn’t received the housing grant, he wouldn’t have been able to build his house. It has already cost him Rs 400,000, and he didn’t have that kind of money. His is one of the handfuls of houses that used stone and mud while rebuilding. Tulku lives in the house with his 13- and 15-year old sons. His two elder daughters were killed when their house collapsed in the quake. Unable to come to terms with the shock, his wife left the village.

Similar is the story of Chet Kumari Karki, 35, of erstwhile Dhuskun VDC-7. Her house was totally damaged in the earthquake. Her husband had died 13 years ago, and she looks after their 14-year-old son by herself.

“Ganesh Karki helped me rebuild my house. I had no means to do it by myself. It wouldn’t have been possible for me to even clear the debris of the damaged house by myself,” said Chet Kumari. Ganesh, trained in earthquake-resilient construction, has been working as a mobile mason in Tripura Sundari Rural Municipality-3.

Now her four-room house is about to be complete, and she plans to make a beautiful home for her son and herself.

“It’s unfortunate that in lack of preparedness and due to the absence of effective policy, we were not able to preserve our original architecture after the earthquake. But when I see these happy people, I convince myself that it was the best we could do in such little time, amid all confusions,” Parajuli concluded. 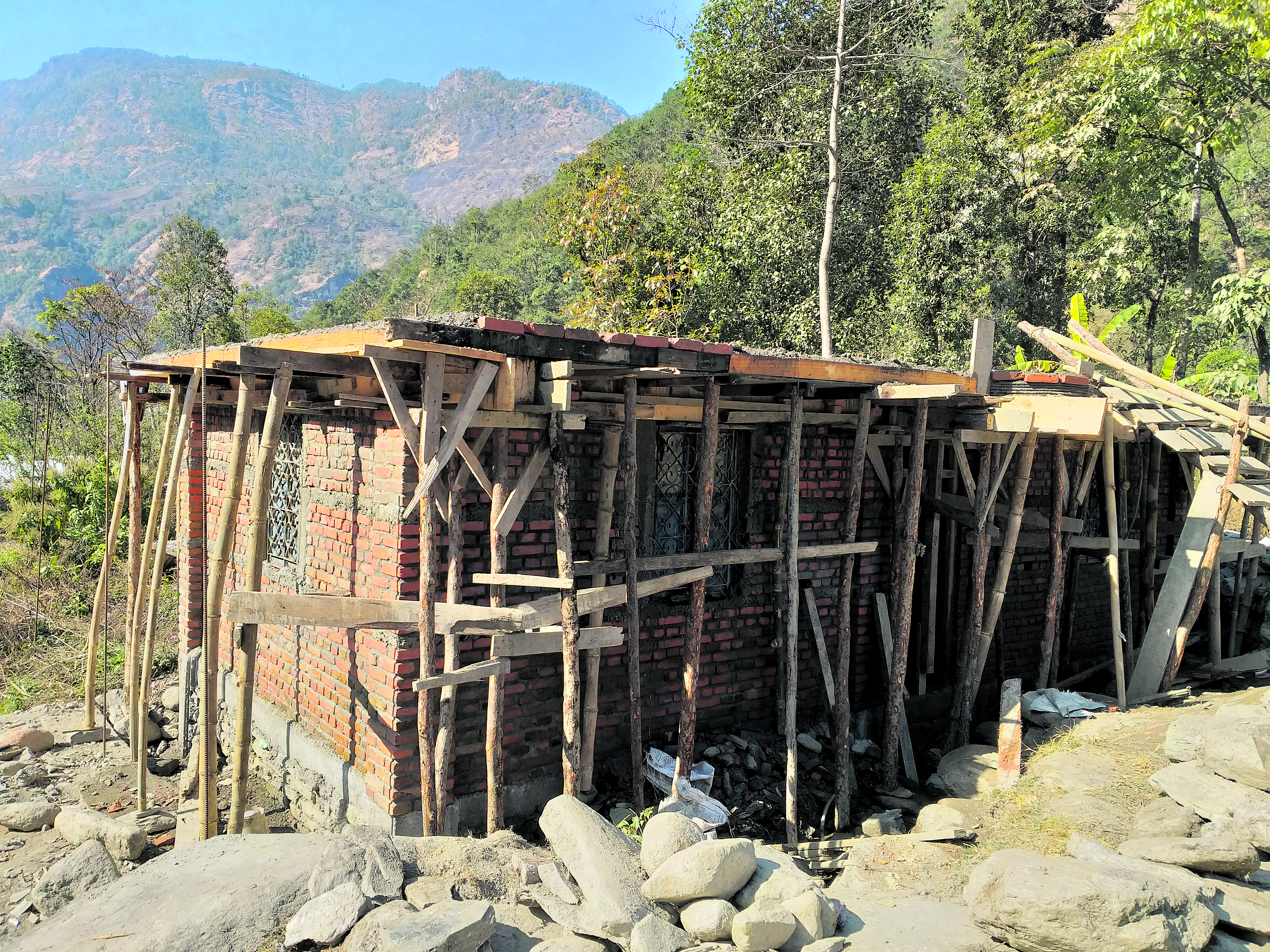 Sindhupalchowk to wrap up reconstruction soon

SINDHUPALCHOWK, Feb 12: With the reconstruction of almost 57,000 houses and many more in the process, Sindhupalchowk, one of the most-affected... Read More...