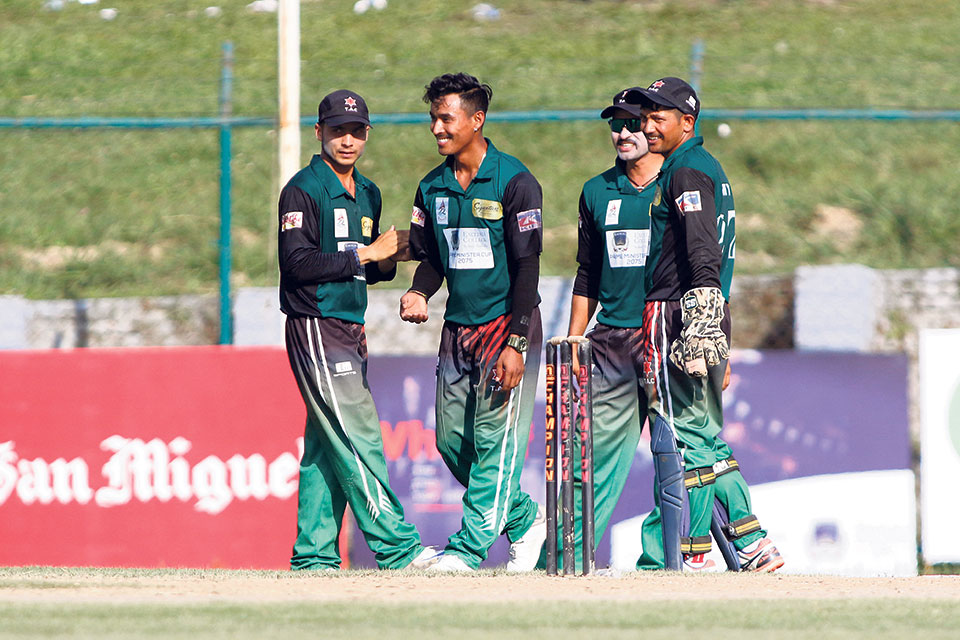 KATHMANDU, May 23: The third edition of the Prime Minister Cup is set to carry a greater value than its previous editions. It is the only marquee 50-over event in the One-Day International (ODI) nation that hosts three ICC-sanctioned franchise T20 events.

The event is valuable also because it serves as a feeder tournament for the next set of Nepali cricket starlets who will go on to grab franchise contracts and, eventually, pave their way to the national team.

Normally, Nepal is blessed with a weather that is favorable for playing cricket throughout the year. However, the end of the PM Cup marks the end of men’s cricket calendar before the three-month monsoon break.

The women’s franchise cricket has taken its own leap this year, with two leagues in the offing from none until last year. Women’s T20 Cricket League will be hosted by Nepal Cricket League Pvt Ltd immediately after the PM Cup, whereas Women’s Champions League (WCL) will be organized by Queens Event Pvt Ltd before the start of the cricket’s next season which will see four back-to-back franchise events lined up for the winter.

WCL will kick start the new season of Nepal’s annual cricket in September. However, Pokhara Premier League (PPL), Everest Premier League (EPL) and Dhangadhi Premier League (DPL) remain the big three, which have brought quality cricket and business in the most beloved sports of Nepal in the recent years. The PM Cup remains the feeder tournament for new cricketers for the franchise leagues.

50-over matches
Nepal’s domestic cricket scene has seen only two 50-over events after earning the ODI status in March last year, in Zimbabwe. The second edition of the PM Cup was held in May 2018 after Nepal secured the elusive status. Similarly, a low-key Manmohan Memorial One-Day Cup was hosted in Inaruwa in the beginning of 2019. Majority of senior national players skipped the tournament.

To summarize, the third edition of the PM Cup remains the most anticipated one-day event in the recent history of Nepali cricket, complemented by the presence of all big stars with an exception of Sandeep Lamichhane who traveled to Australia on Tuesday to spend some time to recuperate his sore back.

Recently, the schedule for ICC World Cricket League 2 was announced. Nepal is set to host the United States and Oman in February 2020 at the Tribhuvan University (TU) Cricket Ground in Kathmandu. Nepal’s quest for the world cup will start from next year, and for that, team Nepal and its members need as many quality 50-over matches as possible. Given the first series being held at TU, any debuting or young cricketer (if need be) will carry the confidence of the PM Cup campaign in the tri-series.

Emerging talents
Saurav Khanal prominently established himself as a dependable finisher when he single-handedly carried Gandaki Province (then Region No 5) into the semifinals in the first edition of the PM Cup in 2017. He emerged as a candidate to play for Nepal but failed to grasp the opportunity in the closed camps. He keeps getting big-money contracts in different franchise leagues. Similarly, Hari Bahadur Chauhan, Bhim Sarki, and Bipin Khatri among others were recognized for their skills and consistency in the second edition of the PM Cup in 2018. They went on to receive franchise contracts and were appointed in the departmental teams.

In perspective, the PM Cup has been a launching pad for the unknown and hidden cricket talents to kick-start their careers. A 50-over match gives ample time for a batsmen coming in to bat at number seven in the batting order as well as a sixth bowler to create an impact.

Mulpani Cricket Ground (Lower)
Mulpani’s Lower Cricket Ground is set to host its first ever official cricket match when departmental team Nepal Police Club faces Province 1 in the inaugural Group B match on the first day of the tournament. The boundaries have been reduced to 55 meters due to a long pending land dispute of the ground.

National cricket team captain Paras Khadka expressed satisfaction that Mulpani was finally going to host a match which in itself was a positive development toward the ground’s completion. “It’s been 12-13 years since we have been hearing about Mulpani Cricket Ground. We should be satisfied that it, finally, is partially ready to host its share of matches,” he said.

Member Secretary of the Nepal Sports Council (NSC) Keshav Kumar Bista echoed Khadka saying that the hosting of matches in itself was a progressive development. “We will need experts to know how the pitch or ground conditions will behave. For that, we need to organize matches in the venue which will happen in a few days.”

This year’s PM Cup will help cricket fans realize Nepal’s longstanding dream to see Mulpani host its first ever match and become an alternative to the over-used TU Cricket Ground. The quality of ground, out-field, and behavior of pitch throughout the tournament will make an interesting viewing.

Dispersion of contest
Since long, provincial tournaments have been touted as boring predictable event with one of the three departmental teams winning the trophy. The departmental teams contract all the top players of Nepal, which results in drawn group stage matches; whereas the provincial teams, lacking experienced and national players, are often seen just completing the formality of getting eliminated before the knock-out round starts.

However, skipper Paras Khadka and vice-captain Gyanendra Malla are set to feature for Province 3 in the third edition making the team one of the strongest contenders for the upcoming PM Cup.

The two flag bearers of Nepali cricket are expected to make Province 3 a team to watch, supported by current U-19 internationals Rit Gautam, Partish GC, and Surya Tamang.

This makes a provincial team, after a long gap, a strong challenger for the mighty departmental teams.

Meanwhile, Sudur Paschim and Gandaki provinces have been Nepal’s biggest talent feeders in recent times. Sudur Paschim with its own DPL and Gandaki Province with the PPL have helped the local players develop self-confidence for endless cricketing opportunities.

KATHMANDU, May 24: The Tribhuvan Army Club of Nepal Army has made a winning start to the 3rd Prime Minister... Read More...