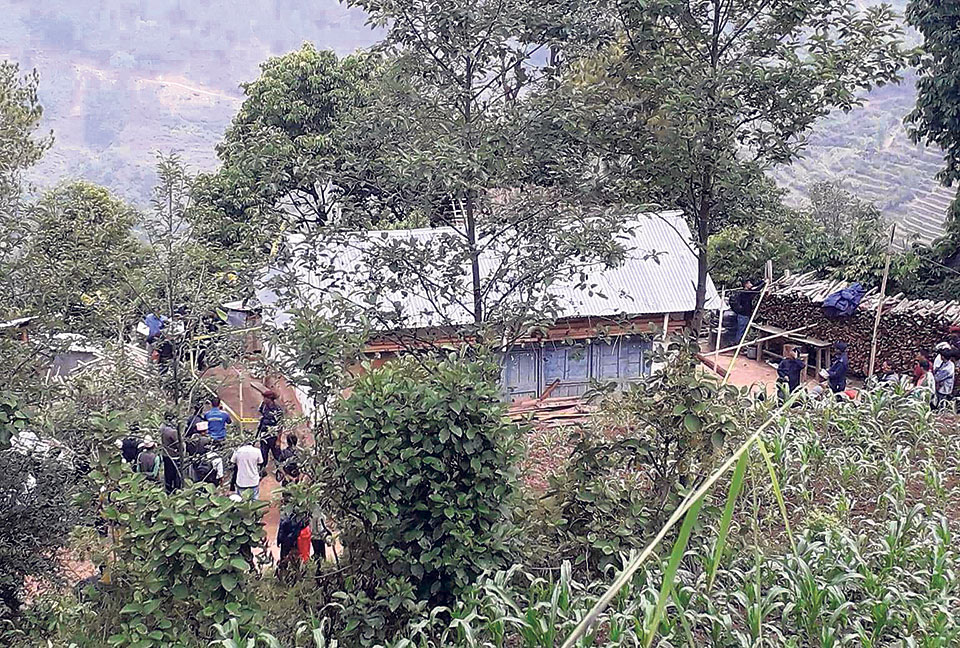 Police on Tuesday afternoon cordon off one of the two houses at Arubote in Miklajong of Panchthar district where the nine members of two families were butchered on Monday night. According to police, Man Bahadur Makhim, who is suspected to have carried out the murders, was found hanging from a tree a few kilometers from the murder site. Photo: Republica

PANCHTHAR, May 22: In a horrific incident, nine members of two families aged between five and 75 were found murdered in cold blood in Miklajung Rural Municipality-3 on Tuesday morning.

According to police, Man Bahadur Makhim, who is suspected to have carried out the murders, was found hanging from a tree a few kilometers from the murder site.

Area Police Office (APO) Rabi informed Republica that according to preliminary investigations, sharp weapons were used to kill the family members of Dhanraj Sherma, 45, and those of his father-in-law Bam Bahadur Phiyak, 79. Murder suspect Makhim was Sherma’s son-in-law.

Only Sita Khajum, a seventh grader who was living in Bam Bahadur’s house for her studies, escaped the gruesome carnage. She narrowly escaped with a right hand fractured. She said a masked individual broke into the house at around 10 pm on Monday and butchered his victims with sharp weapons while they were fast asleep.

“When the murderer turned on Khajum, she reportedly jumped from the first floor to make her escape,” Inspector Tej Narayan Yadav at the APO said, “She ran to another house some 50 meters away.” She told police that the murderer gave chase for some distance but fell behind.

The house that Khajum managed to reach was occupied by only an old woman who was hard of hearing. The two helpless females were frozen silent in fear and it was sheer luck the murderer did not enter the house. Khajum is receiving medical treatment in Dharan.

“When we reached the site, we found that the doors of both the houses were left open,” said Assistant Sub Inspector (ASI) Krishna Chaudhary, a member of the police team that reached the site in the morning. He said the body of Bam Bahadur was found in the porch of his house while the other bodies were found inside the two houses.

“It was a bloodbath inside the houses with some of the blood even finding its way outside,” ASI Chaudhary added. “Big footprints in blood were everywhere.”

“Preliminary investigations show that the multiple murder and apparent suicide by Makhim are related. The bodies have been taken to Dharan for post mortem.”

Police have found a Khukuri knife along with some blood-soaked clothes near where Makhim was found hanging Tuesday afternoon. Makhim was a migrant worker and his wife Man Kumari had been living with her family for the last few months following feuding between them two. They had even filed for divorce at the district court.

A separate three-member team from the Crime Investigation Bureau (CIB) has been mobilized. “A team led by SP Uma Chaturbedi has left for the murder site to probe the underlying cause of the murder,” chief of the bureau DIG Niraj Bahadur Shahi told Republica.

Road accident casualties up in Panchthar

PANCHTHAR, March 26: The number of causalities from road accidents in Panchthar district has already reached 15 in the current fiscal... Read More...

Hearing on case against Madhav Nepal, Speaker prolonged
56 minutes ago