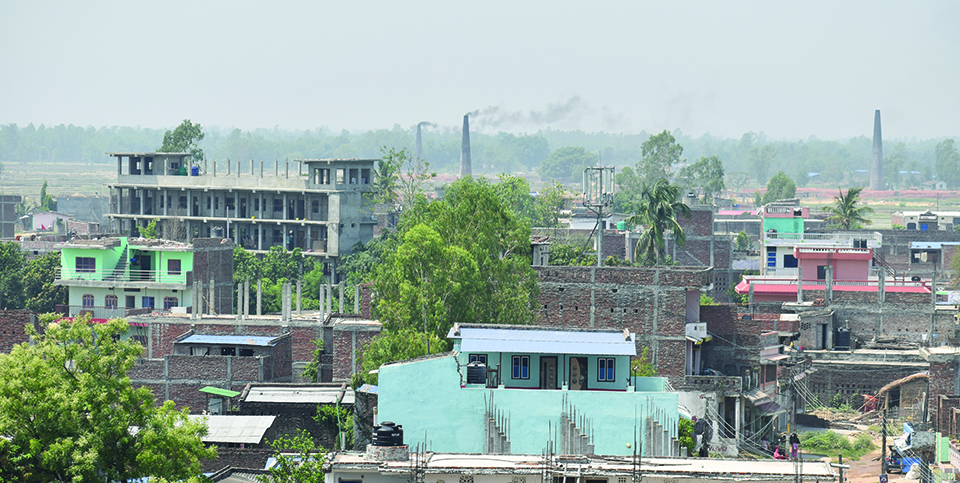 Mithilesh Yadav/Republica Around a dozen of brick kilns operate in the midst of a residential area of Golbazar Municipality, Siraha.

SIRAHA, May 13: Saharun Khatun of Sukhachaina village of Siraha was hurriedly collecting clothes hung at the backyard of her house on Friday evening. If left there for a few more hours, they would become black, she said. "Can you see the smoke rising from the brick kiln chimney over there. Smoke from brick kilns around here is so dense that it changes the color of clothes to black."

We protested against establishing brick kilns in a residential area like ours. We knew that the kilns would not serve us any purpose and instead would only damage our life and environment. But the government did nothing. As always it supported the rich people. Money is everything. -- Mohammad Sharif of Nawatoli

Life has become very problematic for Khatun since the last few years. A growing number of brick kilns around her settlement has taken a toll on her health as well as her farms. "We don't have fresh air anymore around here. We have to breathe the same smoke," she lamented.

Mild cough, which bothered her a year ago, has now become severe. Doctors have told her to go and settle elsewhere from the area. "If you don't move from there, your health will only deteriorate," she quoted her doctor as saying.

Impact of the pollution from the brick kiln on her vegetable farm is evident. The vegetables crumble before they mature.

"It seems that pollution level around here has reached to a dangerous level nowadays. Even plants are not safe anymore," she said.

When the wind blows, the locals do not get out of the home. Khatun said that wind brings coal and ashes to their yards and doorsteps.

"Wind brings a lot of coal and ashes from the kiln factories into our homes. We feel so helpless. We do not go out of our house when the wind is strong," Khatun said.

Locals had raised voice against the establishment of such factories amid human settlements when they were being established. However, their concerns were not heard by the authorities concerned.

"We protested against establishing brick kilns in a residential area like ours. We knew that the kilns would not serve us any purpose and instead would only damage our life and environment," said Mohammad Sharif of Nawatoli. "But the government did nothing. As always it supported the rich people. Money is everything."

Locals had submitted a memorandum regarding this to the government authority three years ago. But neither the district administration office nor their municipality office or local leaders cared addressed their concerns.

"Some leaders told us that they cannot help us. Some remained quiet. Government officers would not even listen to our plea," reported Sarif.

According to the locals, the kilns are operating illegally and should come to closure right away. However, due to the nexus between brick kiln owners and politicians, the factories are operating fearlessly, they accused.

There are settlements of Muslim among other marginalized communities near brick kilns. Locals of Madar, Khirauna, Nawatoli and Parsahi areas are the most affected.

Children of Paachunath Basic School located at Lahan Municipality – 22 have shown worrying signs since the last few months. They suffer from cough throughout the year, and some have skin and other kinds of allergies.

"There are brick kilns all around. No wonder, our children have fallen sick due to the smoke," said the school's principal Harihar Chaudhari. "There is no way to protect them from pollution. Where would we take them?"

According to Chaudhari, fewer students attend school these days. Complaints of eye burn, fever, nausea are the most common reason for absenteeism. "Some children have been taken to doctor, and their medical report say that their health has been affected by pollution," Chaudhari said. "Let alone kids, and adults are also not feeling well these days. Those brick kiln factories have shortened our lives," he added. There are four brick kilns around the school.

Chief of Golbazar Health Post Niranjan Shakya assumes that there might not be even a single person around the kilns who is not affected by the pollution. "Smoke coming from those kilns have not left anyone healthy in this area," he remarked.

According to him, the number of patients suffering from tuberculosis has been steadily increasing in the locality. Many other health issues have become common too.

"Those who come to health post complain us that their cough is black as coal. No wonder, they are under severe health threat. The number of patients with such complaints has increased dramatically," Shakya said. "The kilns pollute water, land, everything."

Farmers also have complained that the yield of their crops is not as good as it used to be in the past. And they blame it on smoke and coal coming from the brick kiln.

How come such factories have mushroomed in the villages? Ram Chandra Dhamala, of Golbazar – 8, questioned. He said that they took the brick kilns to the court and found out they had forged permission papers to operate the factories. "They have shown a different situation in the paper. Human settlements are not seen around the brick kiln in those documents. I am shocked that the government authorities who approved their application did not verify the claims before giving the permission," he said.

Dhamala added that the problem is going to remain as it is until and unless the government intervenes. "Those who are operating the factories are powerful people. So, we want the government to look into the matter and stand on the side of innocent victims," he said.

SIRAHA, June 15: Sankatmochan crusher plant at Charnath Municipality – 8 of Dhanusha is situated around half a kilometer west of... Read More...