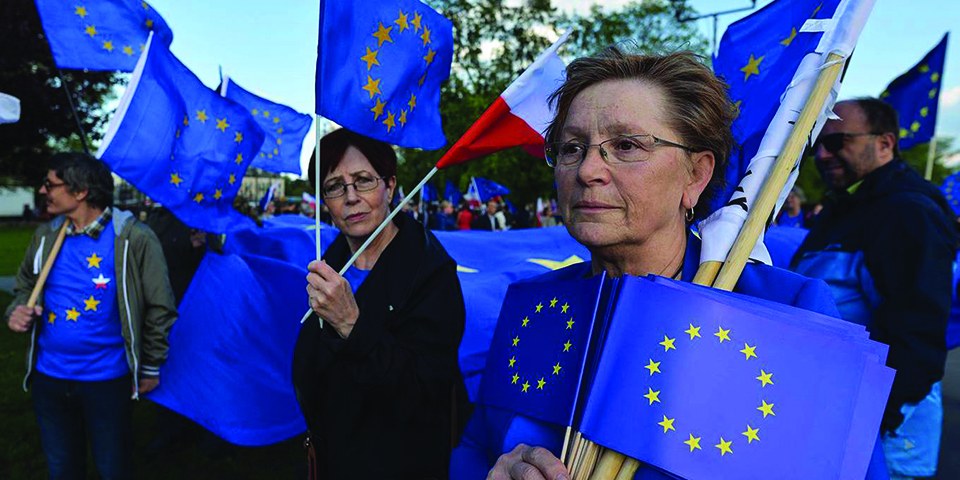 Silvia Merler is Head of Research at Algebris Policy & Research Forum. Simone Tagliapietra is a senior researcher at the Fondazione Eni Enrico Mattei in Italy and a research fellow at Bruegel. Alessio Terzi, a Visiting Fulbright Fellow at the Harvard Kennedy School of Government between 2016-2018, is a former Affiliate Fellow at Bruegel
news@myrepublica.com

Upstart populist parties have painted a negative portrait of the EU, claiming that it’s part of the problem, rather than the solution. Data shows otherwise

BRUSSELS – With just days to go before the European Parliament elections, this is a good time to reflect on why Europeans came together to form a political and economic union in the first place. And it behooves candidates to recognize what voters want from the European Union now.

Upstart populist parties have painted a negative portrait of the EU, claiming that it’s part of the problem, rather than the solution. Yet Eurobarometer data show that the share of Europeans who feel “fairly” or “very” attached to the EU grew from 46 percent in 2014 to 56 percent in 2018. And when it comes to the future, support for EU membership is strongest among younger voters; of those aged 18 to 29, 73 percent have a favorable opinion of the EU, compared to 58 percent among those 50 and older. Moreover, these pro-EU trends are also visible in countries with Euroskeptic governments, including Hungary and Italy.

Similarly, in November 2018, 68 percent of all Europeans surveyed by Eurobarometer said their country has benefited from EU membership, and only 30 percent said their country would do better outside of the EU. For comparison, consider that, despite being in a federal union for over 173 years, roughly one-quarter (26 percent) of Texans would support seceding from the United States.

What about the populist claim that Europeans want to “take back control”? In fact, 60-80 percent of Europeans would like to see more EU-level decision-making when it comes to protecting the environment, investing in jobs, combating terrorism, promoting gender equality, safeguarding democracy, and managing health and social-security issues.

Moreover, 65 percent are in favor of a common foreign policy, 69 percent support a common EU migration policy, 74 percent want a common energy policy, and 76 percent would back a commend defense policy. That level of support for more EU-level decision-making on defense is particularly notable, given that this has long been the preserve of national governments. In the early 1990s, Europeans were evenly divided on the issue.

To be sure, rising support for EU-level action does not mean that agreement on these issues will come easily. But it does point to a growing recognition among citizens that integrated decision-making is better than uncoordinated national initiatives when it comes to tackling today’s complex problems.

Moreover, the policy areas that are of the greatest concern to European voters—such as migration or fighting unemployment—are precisely those where the EU has failed to deliver a coherent response, thus fueling the Euroskeptic narrative. If national governments would let the EU take the lead on these issues, Europeans would see that it has an important role to play, and Euroskepticism would fall further out of favor.

To trigger that kind of virtuous cycle, the EU should direct more resources toward policies and programs that establish a direct link with citizens. Doing so would help to address the fact that less than 50 percent of Europeans feel as though their voice “counts,” even though most do not actually perceive the EU as undemocratic. A functioning single market, a state-of-the-art satellite system, and a globally admired European Research Council are no doubt important achievements, but they operate at a considerable distance from the average EU citizen. By contrast, “kitchen table” issues like free cellular roaming and initiatives such as the Erasmus student-exchange program feature prominently when Europeans explain how the EU has benefited them personally.

Another area where the EU is perceived to be highly effective is competition policy, owing to a well-defined mission and operational remit. By clearly assigning competences in other areas where Europeans support more concerted action, the EU could improve both its effectiveness and its public standing.

The standard objection to further centralization is that it would require a “political union” that has no chance of materializing any time soon. But there are signs of growing support for deeper political integration. For example, the euro crisis forced many Europeans to recognize that what happens in one country can affect everyone. At the same time, there is a growing awareness that policies made in Brussels can have a significant impact on issues such as data protection, copyright, migration, climate change, and the sustainability of the euro.

Hence, for the first time since 1979, transnational parties such as DiEM25 and Volt are running in the European elections with EU-wide programs, rather than on national platforms. And there are new EU-oriented grassroots movements emerging across the board. Those who do not live in the United Kingdom may not realize it, but before Brexit, the now-constant sight of EU flags being waved outside Westminster would have been unimaginable. These inchoate movements of bottom-up engagement with the EU should be cherished and cultivated further, because they offer an invaluable means of bridging the gap between EU institutions and citizens who often feel voiceless.

Needless to say, different national governments will have different views about how to proceed in the policy areas mentioned above. But those disagreements need not be an obstacle to deeper integration. There is ample evidence to show that a diversity of backgrounds and perspectives within an organization is a source of strength, even if it implies heated debate and fiery rhetoric. The EU’s motto, after all, is still “United in diversity.” And as the data make clear, most Europeans still want an “ever-closer union.”

Silvia Merler is Head of Research at Algebris Policy & Research Forum. Simone Tagliapietra is a senior researcher at the Fondazione Eni Enrico Mattei in Italy and a research fellow at Bruegel. Alessio Terzi, a Visiting Fulbright Fellow at the Harvard Kennedy School of Government between 2016-2018, is a former Affiliate Fellow at Bruegel

NRB introduces new Rs 1,000 note which can be identified by visually-impaired
13 hours ago