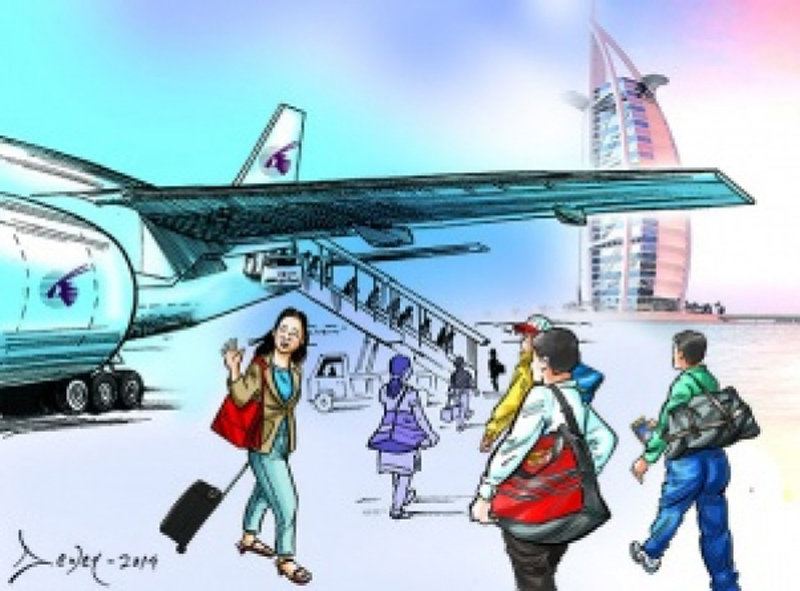 KATHMANDU, Sept 28: Like every government of the past, the present government too began with a pledge to carry out reforms in the foreign employment sector. One of the pledges made by the government was to rescue migrant workers stranded and languishing in various jails in different destination countries.

However, anything substantial is yet to be implemented. Many migrant workers continue to cry for help to return home after being stranded and languishing in jails in various foreign countries. Furthermore, the trend workers being duped in the name of foreign employment continues unabated.

The government has set up fund for the addressing the aforementioned problems of the migrant workers, also including a contribution by every migrant worker leaving the country for foreign employment. However, recent media reports say that millions of rupees meant for the welfare of migrant workers in various countries are being misused.

A total of nine Nepali embassies in different countries including in the Gulf and Malaysia have been accused of misusing the Migrant Workers' Welfare Fund and clearing years of arrears of amounts ranging from Rs 300,000 to Rs 11.6 million every fiscal year.

Moreover, their expenditure details have also come under question. Reports also say that the fund was being spent on other purposes not related to the welfare of migrant workers like sponsoring foreign trips by Ministers and other embassy officials and providing salary to workers in Nepali embassies and purchasing vehicles for them.

The embassies in question include those in South Korea, Malaysia, Qatar, Saudi Arabia, the United Arab Emirates, Oman, Egypt, Israel and Kuwait.

Every citizen has right to get help from the state in times of need and distress. As for migrant workers, they are not simply toiling in foreign land far from home for their families; but they are also contributing to the economy of the state. Remittance remains a significant contributor to the nation's economy. So they deserve help from the state from every possible avenue.

Ironically, the alleged misappropriation of the fund is one that has been set up from the money collected from Nepalis going to foreign countries for job opportunities, to be spent for their welfare. The fund is used for the welfare of migrant workers under different headings like rescuing migrant workers, providing skill-oriented training to them before flying to foreign countries and taking initiations to repatriate them. The family of those killed in foreign land and those injured are also entitled to it.

Hence, there is an urgent need to take effective measures for the proper utilization of the fund so that the beneficiaries have easy access to it. But the scenario is otherwise as many migrants workers trapped in foreign land or injured are finding it hard to avail of the fund--to help them return home and get timely medical treatment.

Dilliram Mahato, 40, from Nawalparasi district fractured his left shoulder bone after he met with a bus accident in course of duty in Saudi Arabia two months ago. He was hence rendered jobless after the accident, but sustained himself with financial help from his friends. His employer only managed an air ticket for him to return home.

Coming from a relatively poor background, Mahato continues to struggle to get access to the fund for his treatment and has been facing hassles every day in the process. Employees at the Foreign Employment Promotion Board, that manages the fund, have been accused of delaying the process to release the money he is rightly entitled to.

Most worrisome situation for Mahato is about the future of his four-member family. He said doctors involved in his treatment told him not to carry heavy loads lifelong. "I do have any skills on occupation that does not involve carrying loads. As a sole breadwinner for the family, I am wondering how to support my family," he said. It isn’t the responsibility of the state to care for the family of those migrant workers injured in foreign land, Mahato questioned.

Mahato is representative of many others returnee migrant workers who are running from pillar to post in the capital seeking help from the fund that was set up with their own contributions. Out of around 5 million Nepalis working in foreign countries except for India, approximately 2,000 were left stranded in the fiscal year 2015\16, according to available data. Likewise, the number of Nepalis languishing in jails in Saudi Arabia, Qatar, the UAE, Malaysia, Kuwait, Oman and Bahrain has reached is 863.

Like Mahato's expectation, the government must take care of the family of those migrant workers injured to the extent that he or she is no longer able to support his or her family.

The state must come to the rescue of such families to not only recognize the contribution of the migrant workers to the national economy but also to give them a sense of governance in democratic republic of Nepal.

And as far as the alleged misuse of the fund is concerned, the incident has landed in the Commission for the Investigation of Abuse of Authority and a fair investigation is expected leading to proper management of the fund and urgently needed reforms in foreign employment sector. RSS

Eight injured in bus accident in Baitadi
52 minutes ago