Ukraine sends in the clown 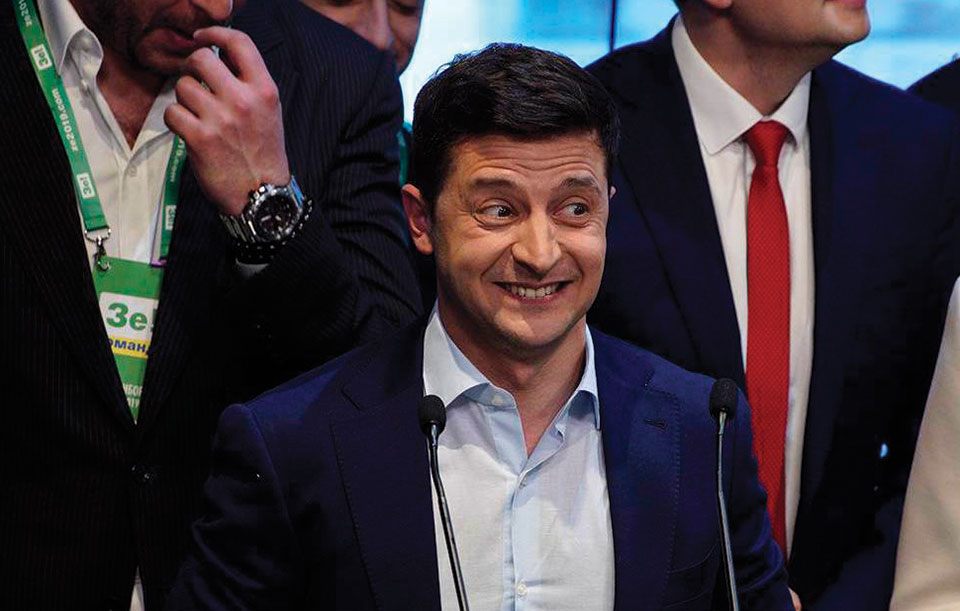 Even when not particularly clownish, showmanship has often been a feature of Ukrainian politics

KYIV – In the 2000s, The West Wing was everybody’s favorite television show about an aspirational US administration—one that fought terrorism without waging war on an entire region or religion, refused to trample on the rule of law, and generally made decisions that were in the country’s best interest. Many wished the show’s calm and collected fictional president, played by Martin Sheen, could replace America’s cowboy president, George W Bush, and his war-mongering sidekick, Dick Cheney.

In a sense, that is exactly what is happening now in Ukraine. The comedian Volodymyr Zelensky, whose only claim to fame up to now was playing a teacher-turned-president in the popular TV series Servant of the People, won the presidency in a landslide earlier this month. But, far from the fantasy of an idealized president, this is yet another example of a distorted reality—all too familiar to Ukrainians—in which characters, not leaders, define politics.

Zelensky is far from the first charismatic non-politician to win political power in recent years. The most obvious example is the real-estate developer and reality-TV showman Donald Trump. But in Austria, Hungary, Italy, Russia, and elsewhere, characters have also used populist rhetoric to appeal to ordinary people who feel ignored by the elites. Another comedian, Beppe Grillo, co-founded Italy’s Five Star Movement, which is now the senior government party, though he stepped aside in January 2018, weeks before the election that brought his creation to power.

There are nuances to this trend. After Trump won the 2016 presidential election in the United States, I recalled Brave New World, in which Aldous Huxley conjured a future in which humanity had been destroyed by ignorance and lust for mindless entertainment. Trump, feasting on burgers as he binge-watches Fox News stories about himself, embodies this disposition.

Whereas a combination of too much amusement and too little knowledge contributed to Americans’ choice of Trump, Ukrainians were reacting to politicians’ betrayal of the ideals of the 2013-14 Maidan Square protests, which sought to get Ukraine out from underneath Russia’s thumb. Chief among the turncoats was President Petro Poroshenko, a Maidan hero who ended up as a manifestation of the old oligarchic system. Most Ukrainians now support radical changes to economic, social, and foreign policy.

Thus, with nothing but an appealing TV persona, Zelensky was able to convince voters that his inexperience would be a better bet than another term of Poroshenko’s corrupt leadership. Despite having no political team or discernable policy platform, he won 73 percent of the vote—a share normally attained by authoritarians who stifle their opponents and stuff ballot boxes.

Desperate choice
It was a desperate choice. As a young Ukrainian lawyer friend lamented, “Any thinking, pragmatic person would vote for Poroshenko, or maybe [former Prime Minister] Yuliya Tymoshenko,” because, despite their faults, “they did a lot for us.” But, my friend added, “we are not thinking like a pragmatic society.”

The candidates’ debates were revealing in this respect. Facing off with Zelensky in a stadium—a  a non-standard venue chosen by the comedian—Poroshenko highlighted his own achievements, from fighting back against Russia in eastern Ukraine to securing visa-free entry to the European Union for all Ukrainian citizens. Meanwhile, Zelensky joked around, irreverently spoke Russian, and practically guffawed at Poroshenko’s patriotic slogan, “Army, Language, Faith.”

As my lawyer friend pointed out, irrational politics are nothing new for Ukraine, whose history has been “a constant carnival led by a bunch of clowns.” Prince Volodymyr, who brought Christianity to Kievan Rus’ in the late 900s, declared that “drinking is the joy of the Rus’.” In later centuries, the Cossacks, Catherine the Great’s independent-minded guards, were inveterate performers, with their long mustaches, furry hats, and exaggerated, almost carnivalesque, displays of machismo.

Even when not particularly clownish, showmanship has often been a feature of Ukrainian politics. In the 2004 Orange Revolution, when Ukrainians rejected Viktor Yanukovych’s victory in a rigged presidential election, Tymoshenko did not just emerge as a political leader. She performed the role of a folk heroine, leading protesters to the barricades with a traditional Ukrainian blonde braid wrapped around her head.

Another Ukrainian friend, a middle-aged scientist, observed that Zelensky’s most direct antecedent may be Andriy Danylko—Ukraine’s best-known entertainer, a musical comedian who performs in drag under the stage name Verka Serduchka. In 2007, Danylko tried, unsuccessfully, to form his own political party.

According to this friend, Ukrainians’ embrace of Zelensky was driven by the same revolutionary urge that fueled the protests in 2004 and 2013-14. While the pro-Western Tymoshenko would have delivered the change that Ukrainians want, he explained, this year voters wanted even more to reject the existing system entirely. The fact that Trump is presiding over a booming US economy only strengthened their willingness to gamble on a TV character.

But even Zelensky may not be the rebellious choice he seems to be. Some have questioned his relationships with oligarchs—in particular Igor Kolomoisky, the owner of the TV channel that broadcasts his show. Many suggest that Kolomoisky effectively bought the election so that he himself could rule Ukraine from behind the scenes. There is also speculation, albeit unfounded, that Zelensky is actually a project of Russian President Vladimir Putin.

Challenge for Zelensky
However he got to power, Zelensky now faces the monumental task of building a state that improves people’s lives by providing quality services. As for the war in eastern Ukraine, even if Zelensky manages to end it, Putin will not give back Crimea, which no Ukrainian would allow the Kremlin to claim as its own. Can a comedian with no experience, team, or platform really be expected to navigate these challenges?

Ukraine is a symptom, not a specimen. In a world that increasingly resembles Huxley’s dystopia, where real political leaders—experienced yet honest, strong yet caring, charismatic yet serious—are few and far between, we all run the risk of being ruled by clowns.

Nina L Khrushcheva is Professor of International Affairs at The New School. Her latest book (with Jeffrey Tayler) is “In Putin’s Footsteps: Searching for the Soul of an Empire Across Russia’s Eleven Time Zones”
© 2019, Project Syndicate
www.project-syndicate.org