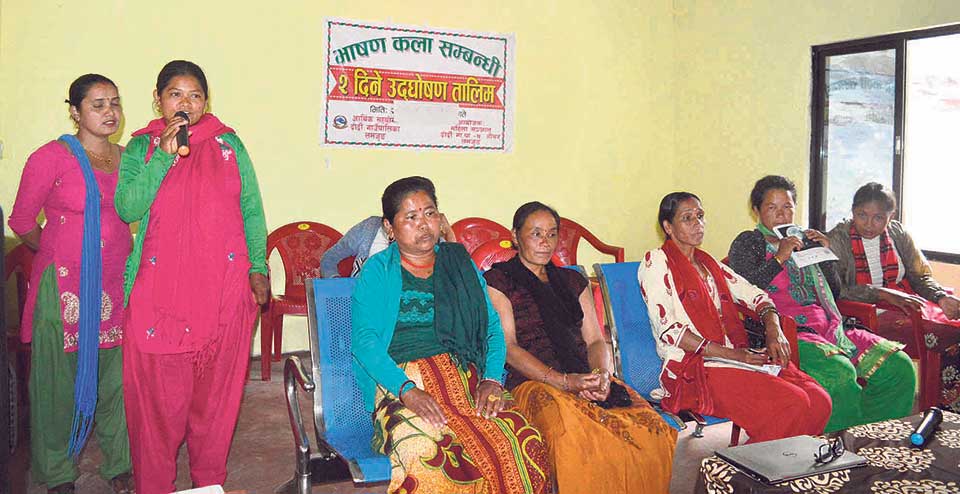 LAMJUNG, May 5: Sadikshya Gurung Ghale of Dordi village of Lamjung was always a shy person. Speaking in front of a lot of people was never her cup of tea. The hesitation did not go even after she became secretary of the local Ama Samuha a few years ago. Chatting with women informally was one thing but presenting oneself in a formal forum was another. But that did not bother her much; women in her village were all shy in public. But they are no more so.

“I had never thought that this training would bring such a drastic change in us. We can now speak comfortably at formal functions,” said elated Ghale. “We learned it through just a few days of training. We had taken many training like this earlier also, but none of them changed us like this one.”

She was referring to a public speaking training provided by the Dordi Rural Municipality to women. Om Bahadur Gurung, the chairperson of the rural municipality, said that it is essential to uplift the status of women in rural areas and training them to share their ideas with the public is a step towards it.

“Women here are limited to household chores. Their voice is never heard in public. They might also have some grievances, some needs, complaints and some ideas. But we often remain unaware of that,” said Gurung. “To help them open up and share their ideas and concerns, we decided to train them in the art of speaking.”

The rural municipality has trained women of all of its nine wards in the past few weeks. During the training, the women were taught to address a mass, introduce themselves, share their problems and ideas.

“Formally it was just two-day training, but in Ama Samuha we continued practicing what we learned during the training. So, it became very effective,” said Ghale. “I feel so surprised that I can speak so fluently now. Other women are also becoming very confident,” she added.

Gurung meanwhile remarked that the training has become a significant breakthrough in bringing women into the mainstream.

“We have taught them to express themselves. Very simple. They have learnt it. Now, they can share their voice anywhere,” he said. “This will make our meetings participatory and more effective.”

In the lack of women in meetings, even their issues would be discussed by men. Gurung said that those women who were members of the local levels would not interfere. But now, the scenario is bound to change.

Gurung stated that participating women were taught not just to speak in public but were also instructed on how they should behave with each other, how to talk politely with children and other family members and how to let others speak and wait for one’s turn. “It was not just a public speaking training. It was an overall behavioral learning package,” Gurung said.

According to Rismaya Gurung, president of ‘Rural Municipality Level Women’s Network’, the training is expected to break women’s silence in the rural municipality. “Women’s silence is never productive for society’s growth. If they do not speak for themselves, who else would do?”

Rismaya said that women in the rural municipality have some peculiarities. They talk frankly only to their peer groups. If they happen to attend some formal function, they often cover their face and keep quiet.

“Girls are taught to stay mute and be submissive since their very young age. So, they never feel comfortable to speak loudly or strongly in front of people,” said Rismaya. “They never talk of domestic violence. Tolerating everything silently is their norm, and that is also what is expected by the society,” she said.

According to Samjhana Kuwar, president of ‘Pratigya Ama Samuha’, at a time when she and few others were desperate over the ways to make women open and bold, the idea of this very training did wonders. “We all were thinking on ways to help our women become open, strong and bold. This idea worked for us,” she said.

Around 160 women have already received the training. Kuwar stated that the training would be further expanded. The rural municipality had hired professionals for the training. Along with that, some local women leader were also asked for help. “We wanted to provide a comfortable atmosphere for trainees. As not doing so would make the women hesitate to participate in the program,” said the rural municipality chairperson Gurung.

Nepal is a country on the move. Politically, despite having only just emerged from decades of turmoil, Nepal’s democracy is... Read More...

Smita is back to normal life. She has resumed regular office work. Looking at her, nobody can imagine the battle... Read More...

“Where do you see yourself in the list of empowered women?” – A casual question flung my way when my... Read More...