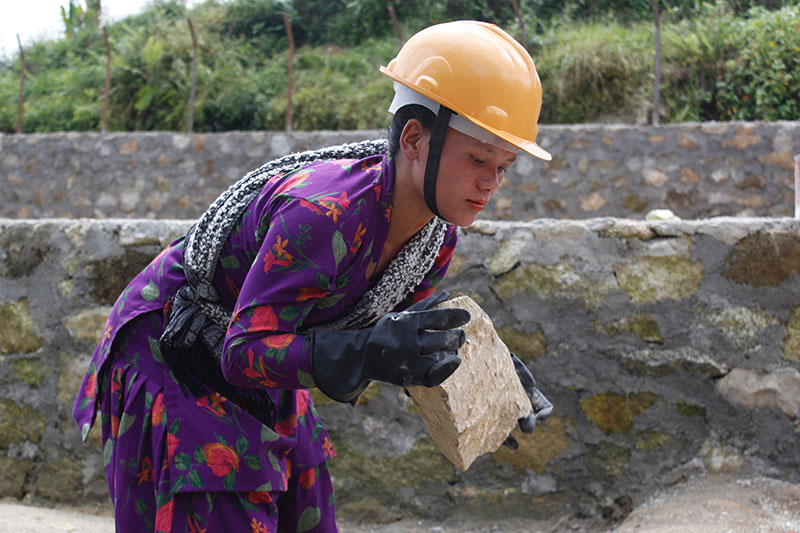 In the absence of men it’s the women who are taking up the responsibility of rebuilding houses in rural areas
On a recent visit to Makwanpur, I met Rajendra Tamang, 35, of Rupsechaur, in Thaha Municipality. He was a participant of a training organized to teach ‘how to build safer and earthquake resistant houses’.

“One of the houses that I had just finished building collapsed in the last earthquake, before the owners started living there,” he said. “It was really a bad experience for me; I couldn’t even face the owner ‘eye-to-eye’.”

Not just that house almost 25 houses he built had several cracks.

“It was then that I realized there was something wrong in my building method,” he said.

It was only when he joined the 7-day mason training course designed by the Department of Urban Development and Building Construction (DUBDC) did he realize his mistakes.

“In some cases, the owners themselves guided us to make cost effective homes and we didn’t realize we were building ‘a suicide house’,” he said.

“I assure that the houses I will build in near future will be based on earthquake-resistance measures.”

In a training on making a demo structure, I saw young girls work hard, trying to closely follow their instructors.

One of them was, Sarita Tamang, 23, of Daman, who came to participate so that she could supervise her ‘new house’.

“My house collapsed in the earthquake. Now we await government money. When we get it, we will start building,” she says.

“This training is teaching me not just techniques of building earthquake-resistant houses, but also helping me think of my career in this sector.”

Her brother has gone overseas to work. She also has a younger sister and mother. Her father died a few years back. “Now, I will have to take the lead in building house. So it’s necessary to have right knowledge,” she said.

According to her, there are hardly any men in the village as they have either gone abroad for employment or to Kathmandu for a better option.

“It’s the women who should thus take the lead in building,” she says.

Apart from these two there were 28 other participants getting training to build earthquake-resistant houses. Through this project more than 400 earthquake survivors will be trained to build hundreds of quake-resistant buildings.

According to the National Reconstruction Authority (NRA), 10,000 people have already received masonry and carpentry training from the government and international agencies after the earthquake. The NRA’s plan is to provide trainings to around 60,000 more people.

The attraction of such kind of training is that the trainers teach them to use locally available materials to build quake-resistant houses, toilets, schools, health posts and other public/private buildings.

The Post Disaster Needs Assessment (PDNA) conducted immediately after the earthquake estimated that at least 50,000 ‘trained’ masons will be needed to reconstruct almost 700,000 houses destroyed either fully or partially in last year’s earthquakes.

The trainees I spoke to said it was the right time to learn such skills as the ‘promised’ money from the government for “rebuilding their houses” is yet to come into their bank accounts.

Given the political instability, frequent government change, delay in formation of National Reconstruction Authority (NRA), the southern border blockade and other issues, the government is only just getting started in rebuilding.

The distribution of the promised budget to quake survivors is also taking place gradually.

In such a scenario, international agencies are playing an important role in filling up the gap by training hundreds of skilled manpower—basically masons and carpenters—as they are the ones who are mostly needed during construction.

It’s unusual to have women building a house in Nepal. But when men are either gone for foreign employment or even to cities, it’s the women who will be taking the responsibilities of building houses in rural areas.

They can also supervise house construction so as to check whether masons are building it properly, if they are following quake-resistant guidelines, etc. These sorts of roles can be played even in the spare time when they are not doing other household works.

In the long run, they will be skilled workers. Either these people will not need to look for foreign employment as they can have plenty of work here and earn handsome wages. Or if they plan to go abroad, they will have the certificates to help them find good jobs.

So for the people like Rajendra and Sarita, such learning activities proved to be a boon. Now it’s up to the state and the communities to use their skills to build a better and stronger Nepal.

The author is currently working as the Communication, Learning and Documentation officer for the ECHO project that helps quake victims rebuild their homes

KATHMANDU, Sept 7: Economics and experts have said that a huge gap between financial resources and needs of various provinces will... Read More...

Without building its capacity in science and innovation, no LDC can achieve Sustainable Development Goals ... Read More...