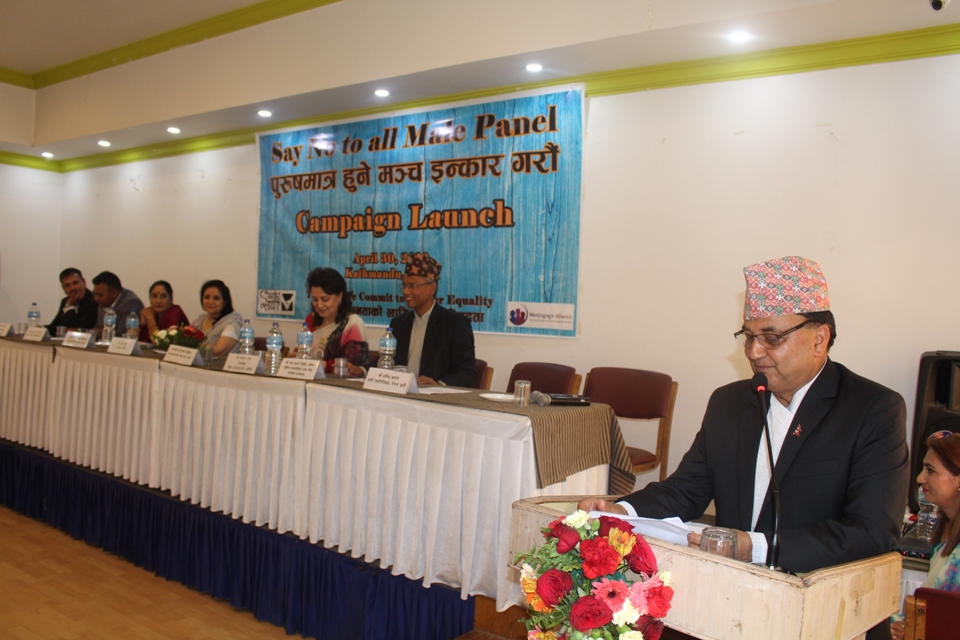 KATHMANDU, April 30: A campaign titled “Say No to All Male Panel” was launched in Kathmandu on Tuesday.

The campaign has been launched with an aim to raise awareness particularly among the policy makers to ensure the participation of women in the public panels, according to the organizers.

Addressing the event, DPM Pokharel expressed hope that the campaign will be able to achieve its goal of ensuring women’s participation in public panels.

Highlighting the achievements made in the field of women rights in Nepal, the deputy prime minister said “We have already ensured 33% women’s participation in the Federal Parliament and 40% in local bodies. But of course this is not enough. There is long way to go.”

Pokharel said that Nepal is progressive in terms of women’s rights comparing to other Asian countries and even some of the developed countries. “There needs to be a constructive public pressure to ensure the women’s participation in all public panels,” he added.

Vice Chairperson at the United Nations Committee on the Elimination of Discrimination against Women Bandana Rana highlighted the importance of the “Say No to All Male Panel” campaign.

“We have been talking about the importance of including female voices and having women in leadership roles for long. But, when there are big conferences or mega events organized by the government or other organizations in the city no women are invited to speak. At least one or two women should be invited as guest speakers. Is not it disappointing?” Rana said.

Rana urged the participants including the chief guest of the event to boycott the public panels which lack the participation of women as guest speakers. She said that despite several challenges Nepal has made significant progress in terms of ensuring women’s rights by bringing several legislations.

On the occasion, Executive Chairman of Nepal Television Mahendra Bista, Commissioner at the National Information Commission Yasoda Timalisna expressed their wishes for the success of the campaign. Saathi, a non-governmental organization in Nepal, is the main organizer of the campaign.