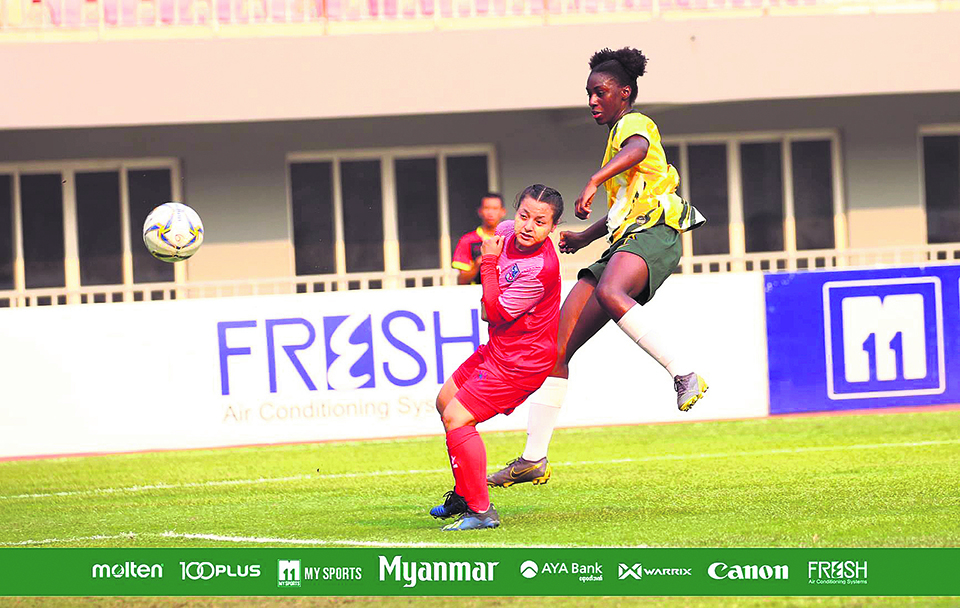 KATHMANDU, April 27: Nepal U-19 women’s football team has suffered a humiliating 11-1 defeat at the hands of Australia in the first match of the second round of the AFC U-19 Women’s Championship in Myanmar on Friday.

At the Mandalarthiri Stadium in Mandalay, Nepal went down 6-1 in the first half and conceded five more goals in the second period to start the tournament poorly. Manjali Kumari Yonjan scored the only goal for Nepal in the first half injury time.

Australia, who is in the sixth position in women’s FIFA rankings, dominated Nepal, which is in the 106th rank, throughout the match and gave the losing side no chance at all.

The Nepal team that traveled to Myanmar in hopes of getting good results from the tournament performed poorly in the first match. It could not find ways to stop Australian attacks and conceded a staggering 11 goals in the first match.

Nepal will now take on Uzbekistan on Sunday in its second match of Group A, which also consists of the host Myanmar, who Nepal will play on Tuesday.

The top two teams of each group from the second qualifying stages will enter the final stage of the AFC U-19 Championship which will begin from October in Thailand.

Nepal team captain Saru Limbu argued that the team lost against Australia because of the opponent’s physical superiority.

“Australia is a better side than us. They are physically strong and that helped them dominate us,’’ captain Saru said. “We had to face an unexpected result. But, we will try to go through the next round playing well in the two games.’’

Nepal had reached the second round as the Group B runner-up from the first round in the last October in Thailand.

Nepal, who had lost 3-0 to Thailand in the first match, had defeated India 2-0 and Pakistan 9-0 to go through as the runner-up.

KATHMANDU, Sept 12: A 31-member national football team including 23 players left for Jordan on Thursday to participate in the... Read More...