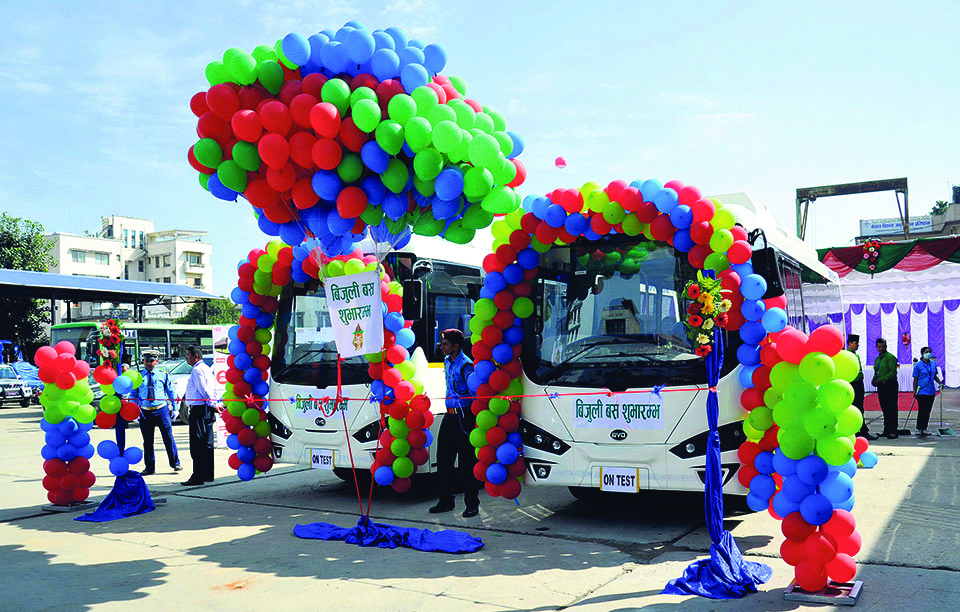 Gajurel is a transport expert and Pandey is currently a graduate student at Crawford School of Public Policy, Australian National University
news@myrepublica.com

Nepal faces a burgeoning trade deficit of 127.34 billion rupees. Import of motor vehicles and the subsequent import of petroleum to power these vehicles has been one of the biggest contributors fueling the deficit. To gain a perspective, look at the statistics. As of last fiscal year, there were 32, 21,042 registered vehicles in the country, marking a 16 percent increase from 27, 83,428 vehicles of previous fiscal.  Motor vehicle ownership has been increasing on an average of 20 percent per annum, soaring the demand for petroleum products. Refined petroleum products amounting to $1.04 billion were imported in 2017, making for around 11 percent of the total imports. The increase in emissions due to higher burning of fossil fuels has exacerbated air pollution, particularly in the urban areas with higher concentration of registered vehicles. Adoption of electric vehicle technology can be a feasible strategy to tackle air pollution and widening trade deficit.

Electric vehicles are in use currently, both at the private and government levels, but the number is negligible. The federal and provincial governments have communicated their plans to prioritize purchase of electric vehicles. The federal government has recently decided to operate 300 electric buses in Kathmandu valley. Province 3 and Sudur-Paschim province have also brought out plans to operate electric buses. Importing these vehicles might stress out our foreign exchange reserves, but the reduction in fuel imports will compensate this financial burden.

We need electric vehicles to reduce pollution and trade deficit. But buyers do not think of it this way, for their main motive is to maximize profits. Electric vehicles are costlier than their fossil fuel counterparts, and as such are unlikely to be adopted if left alone to market forces.

An incentive that doesn’t work is as bad as having no incentive at all. What Nepal lacks is a strategic approach to encourage adoption of electric vehicles. Both India and China have core strategies in place to turn electric. India has outlined a vision to have an all-electric vehicle fleet by 2030. It has launched a National E-Mobility Program which focuses on public procurement to facilitate demand for electric vehicles in India. The program also aims to create the necessary charging infrastructure and policy framework to meet 30 percent target of electric vehicles by 2030. China currently has the largest number of electric vehicles and has been providing financial incentives to both the manufacturers and end consumers. The National Electric Vehicle Subsidy Program grants subsidies based on three characteristics—vehicle range, energy efficiency and battery pack density. The incentives have been designed to push manufacturers to produce electric vehicles with a higher mileage range. China is also actively seeking to promote an electric transport fleet, including public transportation. The Chinese city of Shenzhen completely transformed its urban fleet of 16,359 buses to electric models in 2017.

Europe is moving forward faster in this direction. Sweden plans to implement petroleum fuel-free transportation system by 2030. Other developed countries have also implemented various schemes to encourage adoption of electric vehicles. With hydropower as the only major source of energy produced domestically, Nepal should aim at promoting the electric vehicle technology. A strategic approach should be adopted to formulate policies that encourage people to shift to electric vehicles.

Management of battery is another challenge. In general, the battery of a small vehicle lasts up to 7 to 10 years while that for larger vehicles needs a replacement every 3 to 5 years. Though unsuitable for re-use in the vehicles, such batteries still have 70 percent of their original capacities and can be utilized to power home appliances or as backup for solar power. However, after certain time point, these batteries will have to be recycled. Almost all countries encouraging battery powered electric vehicles are facing the problem associated with management of used batteries. The European Union requires the manufacturer of batteries to finance the cost of collecting, treating and recycling all collected batteries. China has the provision that enforces producers to take responsibility of recycling used batteries. Countries that do not produce electric buses normally return the used batteries to the producers for recycling. For instance, Malaysia purchases electric vehicles from China and returns the used batteries to the supplier for recycling. Nepal should also adopt this strategy to manage the used batteries as we lack recycling infrastructure.

Gajurel is a transport expert and Pandey is currently a graduate student at Crawford School of Public Policy, Australian National University

Nepal witnesses sharp decline in COVID-19 cases, only 570 new cases recorded in past 24 hours
6 hours ago
Marriage attendee found with left leg chopped off
10 hours ago

Health desk mandatory at grade12 exam center, not more than 20 students in a room
12 hours ago