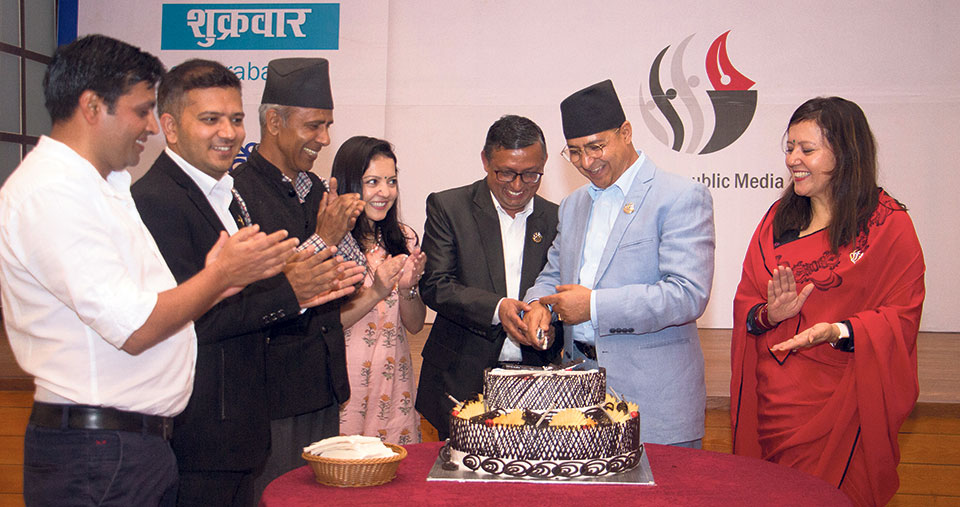 KATHMANDU, April 24: Nepal Republic Media  (NRM) Pvt Ltd has vowed to become a voice against corruption by covering more investigative stories in the days to come.

Top officials and editors of different NRM publications made the announcement at a function organized to mark its tenth anniversary on Tuesday.

“We have been continuously raising issues of irregularities in public  organizations such as Nepal Oil Corporation, Sajha Prakashan, Sikta  Irrigation Project along with the Lalita Niwas land scam, and we continuously follow up on the issues until they are taken to a  logical conclusion,” she said while addressing the anniversary function.

NRM Chief Executive Officer Sambridhi Gyawali said that the publication  dreams to become one of the biggest media houses in the world. “We vow to work  against corruption for the sake of society, people and the nation, becoming  leading media in and outside the country,” she said. “While we will expand our digital products to globalize our content and further strengthen our print-based publications with more focus on  investigative stories in the days ahead.”

Editor-in-chief  Gunaraj Luitel of Nagarik national daily, underscored the importance of self-encouragement and regular update in the field of journalism.

Republica  Editor Subhash Ghimire said the reporters should be fully  dedicated and innovative throughout life to explore important stories  that could change society and to keep journalists always relevant.

NRM completes its 10 years of establishment and enters 11th year on April 24.

As NRM marked its completion of successful 10 years on Tuesday in an in-house function, the NRM is celebrating the commencement of its 11th year journey on Wednesday as a public function felicitating some exemplary individuals as Nagarik Nayak [Nagarik Heros].

Publisher of Republica and Nagarik dailies, NRM has its two radio stations, a weekly tabloid Shukrabar, a monthly magazine Parivar, along with provincial editions across the country and its digital platform Nagarik Network.

KATHMANDU, April 25: Nepal Republic Media (NRM) has marked the commencement of its 10th year organizing a special function in the... Read More...

KATHMANDU, April 24: Nepal Republic Media Pvt Ltd has entered into the ninth year of its establishment. The NRM, the... Read More...