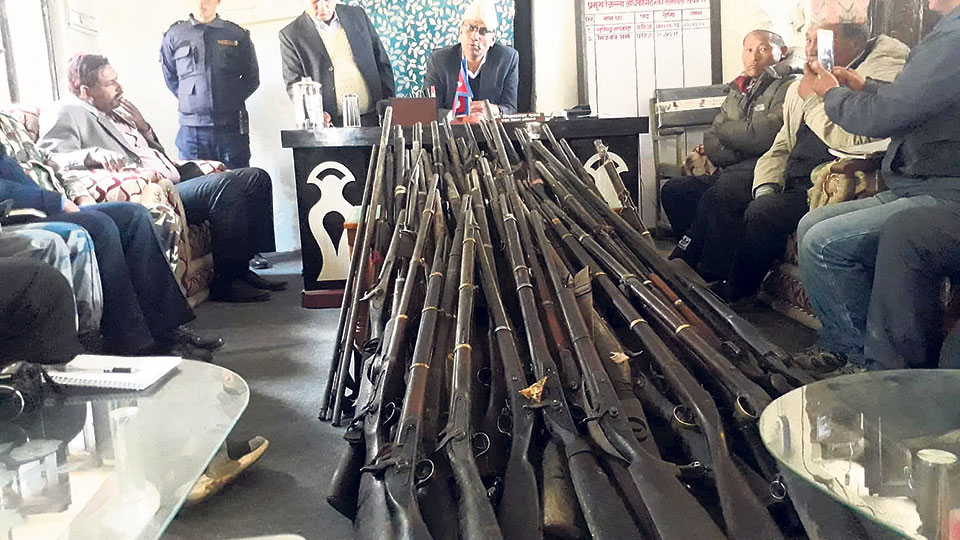 The country-made guns submitted by the locals are kept at the District Administration Office (DAO). Photo: Lokendra Khanal/Republica

RUKUM, April 22: Rukum has strong association with the decade-long armed conflict. Hundreds of people were tortured and victimized during this period especially in the eastern part of the district. Inhabited mostly by the people of Magar community, most locals of Rukum(East) have country-made guns at their homes.

Firing guns during the celebration of births, marriages or deaths is a regular ritual for the people here. Guns are an inevitable part of the culture of the people here. Most laborers and security personnel do not like to work in Rukum (East) stating that the people here still treat the workers from outside the district like in the insurgency period.  However, breaking with their tradition, people here have started submitting their guns and weapons to the government. There are three local units in the district and so far, 111 guns have been submitted to the government. According to the locals, they decided to submit the illegal arms and weapons to the government "as citizens play a pivotal role in maintaining peace and security in society."

The Local Forest and Wildlife Conservation Committee has been collecting the country-made guns from the public and handing it over to the District Administration Office (DAO), says Amardhan Pun of Putha Uttarganga Rural Municipality-2. He further adds that the weapons are being collected also to ensure the safety of wild animals and to lower the rate of crimes.

This move is also expected to change other people's thinking toward Rukum. This campaign started from last November. Chief District Officer (CDO) Mitra Lal Sharma said the move taken by the locals is a great achievement for the district. Dhanish Pun of Putha Uttarganga-4 informed Republica that a campaign was organized to make the local unit free from illegal arms and weapons.

Even the weapons used during the armed conflict are sometimes found in the forests these days, say locals. CDO Sharma expressed his gratefulness toward the people for submitting the guns to the government. However, the campaign has been intensified as some people have still kept the weapons hidden. The guns and weapons submitted by the locals will be kept at the District Police Office (DPO).

RUKUM, Jan 4:  A person has died while four others sustained serious injuries in a tractor accident at Simli in... Read More...