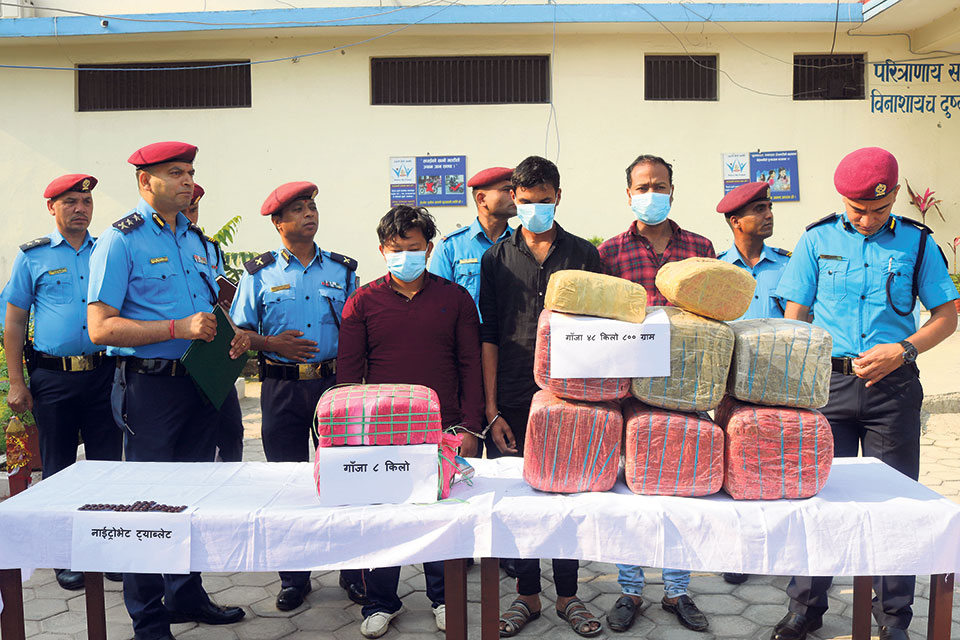 MAKAWANPUR, April 22: Hetauda Police have arrested an Indian national with 48.8 kilograms of cannabis from a car owned by the All India Crime Check Organization. The car with registration number BR 31M 5051 has an Indian flag and also bears an additional plate with inscription of the organization's secretary on it.

Superintendent of Police Mukesh Kumar Singh of District Police Office, Makwanpur stated that they confiscated eight packs of cannabis from under the car's seat during regular checking. According to Singh, police impounded the car and took the driver under control from Tintapke-9 of Hetauda on Friday.

Ambulance, gas and oil tankers were previously used for the smuggling of cannabis, police officials said during a press conference. However, it is the first time that a car allegedly belonging to a highly positioned official of Indian crime check organisation has been used in smuggling. The arrested driver Singh confessed in the press conference that he had previously smuggled cannabis to India three times.

Police units are currently interrogating Singh to find further details about the car that travelled from Manahari to Hetauda through the East-West Highway.

As per the Narcotic Control Act 1976, the act of smuggling narcotics is punishable with maximum 10 years of imprisonment and fine up to Rs 100,000 with the confiscation of vehicle used in smuggling.

Meanwhile, police also arrested two Neplis with illegal drugs in separate cases. Twenty-two-year-old Pappu Rai Bhar of Prasauni-5 Rural Municipality of Bara was arrested by police with 8 kg of cannabis from a bus with registration number Na 5 Kha 3952. The bus was travelling to Birgunj from Hetauda when they busted the smuggler during a regular checking. Likewise, 26-year-old Rupak Rai of Hetauda-8, Kamane, who was driving a micro bus (Na 1 Ja 1739), was also arrested while smuggling 60 tablets of Nitravet-10 from Birgunj to Hetauda.

KATHMANDU, Oct 8: A man has been arrested with 131 kilograms of cannabis at his home in Parsa. ... Read More...