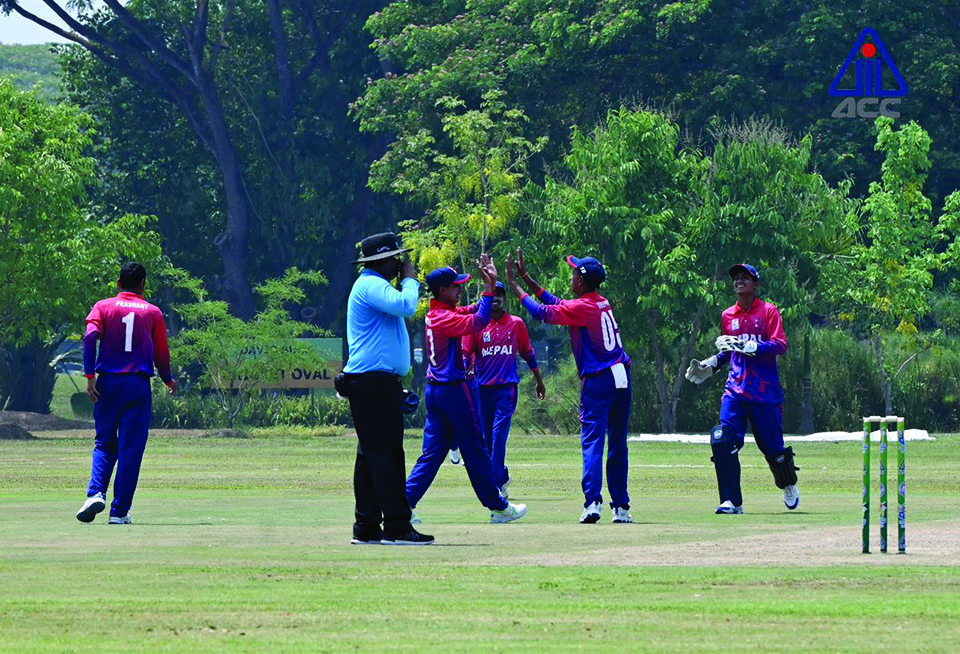 Players of Nepal U-16 cricket team celebrates after dismissing a batsman during the ACC U-16 Eastern Region championship 2019 at the Prem Tinsulanonda International School Cricket Ground in Chiangmai, Thailand on Saturday. Photo Courtesy: ACC

KATHMANDU, April 21: Defending champions Nepal U-16 cricket team started the title defense with an astounding win of seven wickets against Myanmar U-16 in the ongoing ACC U-16 Eastern Region championship 2019 held at the Prem Tinsulanonda International School Cricket Ground in Chiangmai, Thailand on Saturday.

In a 35-over per side match, Nepal completed the paltry chase of 58 runs in 8.1 overs to register first win of the East Asia’s premier age-level event during the Group ‘A’ match.

Arjun Kumal scored 26 runs from 15 deliveries including four boundaries to share a match winning partnership of unbeaten 37 runs with Prashant Mahat who remained not out in 9 runs.

Kung Tate picked up two wickets for Myanmar reducing Nepal to 24 runs for the loss of 3 wickets at the end of four overs. Skipper Bishal Bikram KC was dismissed for 3 runs.

Rupesh Kurmi and Nikhil Kumar Singh shared a wicket each whereas four batsmen Myanmar were caught short of their crease in a brilliant display of fielding.

Tate scored 19 runs in the innings to help his team cross the 50-run mark in a forgettable day of batting. None of the other batsmen were able to reach double figures.
KC was adjudged player of the match for setting up the win. Nepal will play its second group match on Wednesday against Malaysia.

Thailand is the third team of the group ‘A’ that will host Nepal on Thursday. The top two teams at the end of group matches will reach the semifinals of the tournament.