Will Cristiano Ronaldo show another type of reaction? 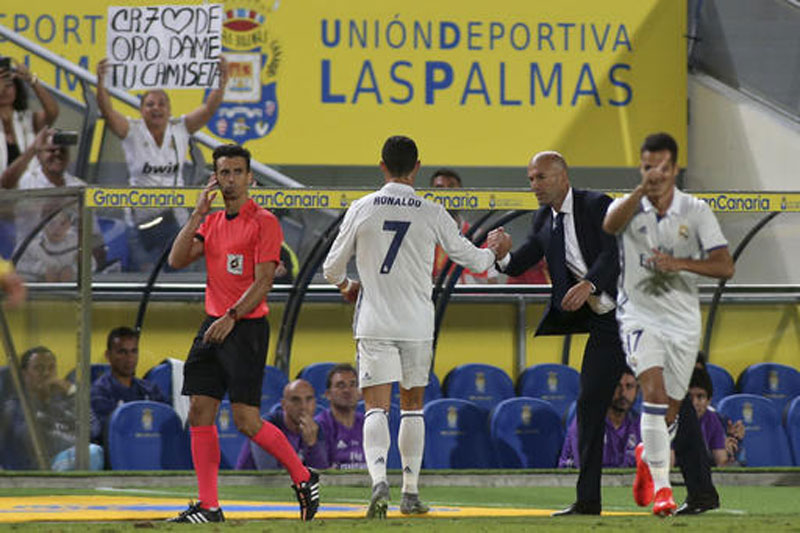 The Portugal winger was visibly upset when he came off in the 72nd minute of the 2-2 league draw at Las Palmas. Madrid coach Zinedine Zidane said he pulled Ronaldo to rest him for Tuesday's match against Borussia Dortmund in the Champions League.

Ronaldo did not play well but he did set up one goal and he is likely to be eager to dispel any doubts about his and the team's form in the match against Dortmund. Two consecutive draws in the Spanish league and Ronaldo's little rant have put Real Madrid on the verge of an early crisis.

With 97 goals in the Champions League, Ronaldo is close to becoming the first player to score a century in the elite club competition.

Here's a look at Tuesday's matches in the Champions League:

Monaco, which hosts Bayer Leverkusen, is sweating on the fitness of striker Radamel Falcao, who is recovering from a concussion sustained in a midweek French league defeat against Nice.

Monaco said Falcao has resumed training but on an adjusted program as he continues his recovery.

The 30-year-old Colombia striker has made a decent start to the season with three goals in six games.

Leverkusen escaped another Bundesliga embarrassment when Javier "Chicharito" Hernandez scored a hat trick in Mainz for a 3-2 win.

Leverkusen drew 2-2 with CSKA Moscow to open its Champions League campaign, while Monaco won 2-1 at Tottenham.

Security will be in tight in Moscow for the arrival of Tottenham. Russian and English fans fought each other on the streets of Marseille before their national teams played at the European Championship in June, and in the stands after the final whistle. CSKA's fans have a record of racism and violence.

Tottenham arrives without injured forward Harry Kane, though Son Heung-min has deputized recently with some success.

CSKA's main concerns will be at the back, with an aging center-back pairing and a goalkeeper, Igor Akinfeev, who has not kept a clean sheet in the Champions League in 10 years. The Russian champions have one win from their last four games in all competitions.

Borussia Dortmund opened its campaign with a 6-0 win over Legia Warsaw and followed with 14 goals in its next three Bundesliga matches.

New signings Raphael Guerreiro, Ousmane Dembele and Emre Mor are getting plenty of playing time and are living up to expectations, while striker Pierre-Emerick Aubameyang already has five goals in five matches in the Bundesliga.

But Aubameyang is nursing a left-ankle injury, while backup Adrian Ramos and defender Marc Bartra have groin problems. Forward Andre Schuerrle is back in training after a knee sprain.

Dortmund has won its last three home matches against Real Madrid and has never lost at its stadium against the 11-time Champions League winners in five matches.

Zidane will not be able to count on left back Marcelo and defensive midfielder Casemiro because of injuries, but central defender Pepe is set to return to the lineup.

Legia seeks to bounce back with a new coach, Jacek Magiera, who has replaced Besnik Hasi. ButSporting Lisbon also needs a win after losing 2-1 at Real Madrid.

Leicester manager Claudio Raniero has swatted away suggestions that his players are saving their best for the Champions League this season.

The English champions have lost 4-1 in the Premier League the weekend before their first two matches in the Champions League, first to Liverpool and on Saturday to Manchester United.

With Europe in mind, Ranieri even took Jamie Vardy and Riyad Mahrez off at halftime against United — with Leicester 4-0 down and seemingly no way back.

After the drubbing by Liverpool, Leicester responded by easing past Club Brugge 3-0 in its first ever game in the Champions League and next faces FC Porto on Tuesday. Porto hasn't won any of its 16 matches away to English opposition in the competition.

FC Copenhagen, which opened with an impressive 1-1 draw at Porto, is at home against Brugge. They last met in the group stage of the Europa League in 2014, with Brugge winning 4-0 in Denmark.

Dinamo Zagreb, which lost 3-0 at Lyon, is another team with a new coach. Zlatko Kranjcar was replaced by Zeljko Sopic after a 5-2 domestic league loss at Rijeka.

Dinamo hosts Juventus, which was held to a 0-0 draw by Sevilla in its opener.

Juventus has lost Daniele Rugani and Kwadwo Asamoah for six weeks, both with right-knee injuries. It is a blow for the five-time Serie A champions, since Medhi Benatia and Claudio Marchisio are also injured.

Sevilla hosts Lyon in the other match.

Lyon is missing striker Alexandre Lacazette, who is nursing a thigh injury. Lacazette scored 48 league goals in the past two seasons and had six in four matches to start the latest campaign.

In his absence, Lyon coach Bruno Genesio must decide whether to play roaming forward Nabil Fekir as a central striker or give that role to 19-year-old Maxwell Cornet, who scored in the win over Dinamo.

The prolific forward told the Bernabeu board that he wants an eye-watering salary of £1.35m-per-week if he is to sign... Read More...

Final over for Cristiano Ronaldo, 0-0 at halftime

SAINT-DENIS, France, July 11: Cristiano Ronaldo’s Euro 2016 is over after the Portugal talisman was substituted from the final in Paris... Read More...