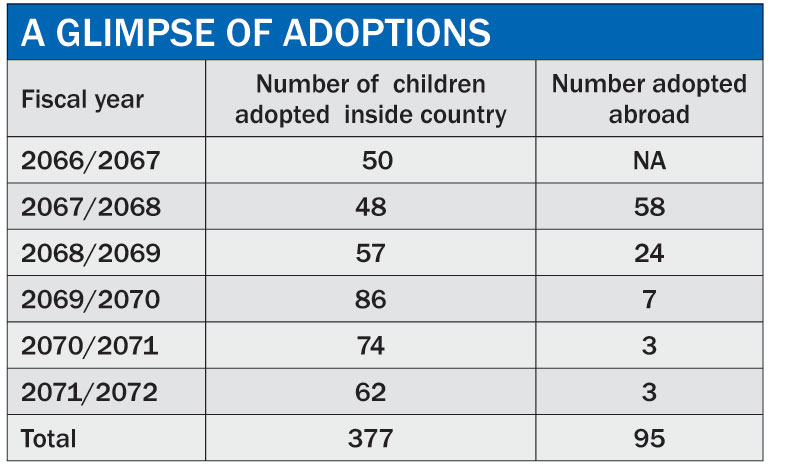 Under the law, couples who do not have children of their own can adopt orphan children or children living in dire circumstances, after completing the necessary legal procedures.

Couples with children of their own cannot adopt.

At a time when the number of foreigners adopting Nepali children is decreasing, the number of Nepali couples adopting has become significant in the last five years, said Mahendra Prasad Shrestha, chairman of the Inter-Country Adoption Management Development  Board (ICAMDB).

“The number of children being sent abroad through adoption has decreased after we formulated stricter adoption rules six years ago,” said Shrestha.

There used to be 45 registered child care homes through which adoptions could be effected. After the new rules came into effect, the care homes have declined to just 15.
Under the new rules, the children to be adopted have to be verified, permission should be taken from the district administration office and the matching committee, and transparent records should be kept on the procedures and fees charged.

A foreign national wishing to adopt a child in Nepal has to pay US$ 8000 of which $5,000 goes to the child care home and $3000 is for the processing fee. The rules for Nepali couples who wish to adopt are easier compared to those for foreign couples.

They should also produce a health report to prove that they are physically and mentally fit to take care of the adopted child. It is also  mandatory for them to own their own home.

There should also be a psycho-social report to show that couple are capable from all points of view for adopting a child .

Adopting families are not allowed to select the child for adoption beforehand. However, they can choose the gender. A matching committee puts the children on a list and the adopters take the child by roll number, according to ICAMDB.

The government has allowed orphans to be adopted through set procedures.  Twins are not separated. Orphans are certified as such by the district administration office. “The DAO neither rejects a file nor grants certification of orphanhood. They intentionally delay matters. That is the biggest problem,” said officials at the Ministry of Women, Children and Social Welfare (MoWCSW).

KATHMANDU, May 24: CPN (UML) candidate is leading the vote count in the Kathmandu Metropolitan City (KMC) by a tremendous,... Read More...