Annual Report of the Office of the Auditor General 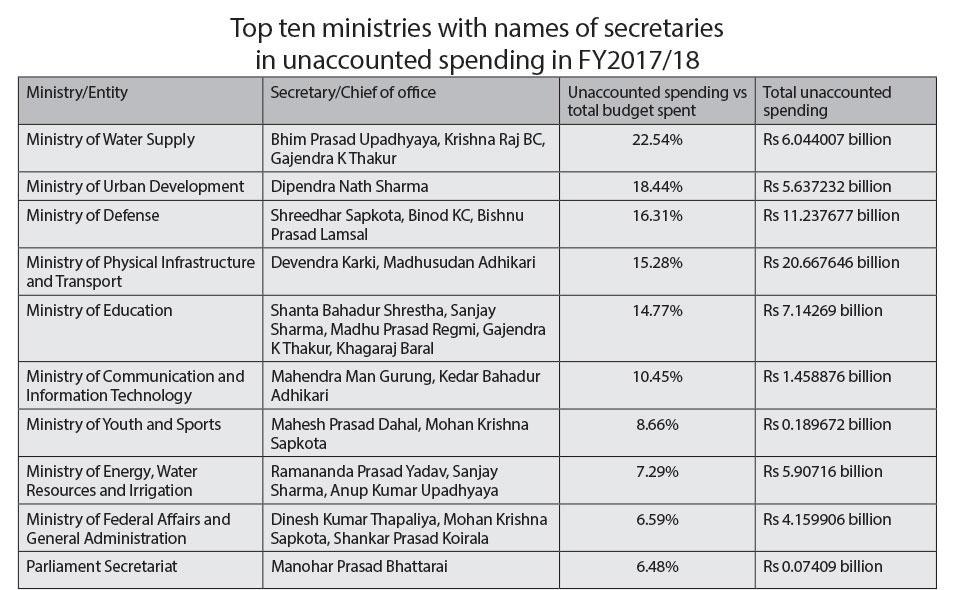 KATHMANDU, April 13: The Office of the Auditor General (OAG) has identified 18 major areas that are in need of reforms.

Releasing its annual report on Friday, the OAG laid out its recommendations for reform to strengthen financial discipline in public administration and government agencies. The report has pointed out budget and expenditure management, foreign assistance, project management, public procurement, and protection and utilization of public properties as areas that are in need of reform.
Service delivery, revenue administration, laws related to financial management, financial compliance, use of information and technology, and accounting and auditing are other areas that call for reform, according to the OAG report.

The OAG realized the need to bring about reforms in key areas following the audit of Rs 516.09 billion of expenditures made by federal, provincial and local governments, organizations, committees and district coordination committees.

In its audit report, the OAG has not only found financial mismanagement and irregularities in many government agencies, but also lack of budget discipline. Huge amount of budget transfer, rise in government expenditure at the fiscal end, weak monitoring of grants, failure to utilize government equipment and physical infrastructure, and delay in contract management are some of the major finding of the OAG in its report.

The OAG has also shown its concern over the growing dues of government revenue. The total revenue jumped by 56 percent to Rs 252.13 billion in FY2017/18 from Rs 161.16 billion a year earlier. Some of the companies and agencies, who have not settled their tax dues include  Orind Magnesite (Rs 1.46 billion), Butwal Spinning Mills (Rs 1.28 billion), Gorakhkali Rubber Industry ( Rs 1.4 billion), Janakpur Cigarette Factory (Rs 2.19 billion), Yatayat Sansthan (Rs 1.24 billion), Saajha Yatayat (Rs 2.12 billion) and three municipalities (Rs 1.54 billion), according to the report.
Revenue dues of a telecommunication company (Rs 60.71 billion) and another taxpayer (Rs 11.87 billion) are sub judice in the appellate court.

Revenue exemption is another area that has featured in the OAG report. According to the report, the government provided Rs 41.24 billion worth of revenue waiver in FY2017/18. The government has provided Rs 8.76 billion of revenue exemption for import of chemical fertilizers alone and Rs 2.43 billion for import of agro and livestock products, the report shows.

“While the waiver is aimed at encouraging the increase of domestic production, the exemption provided even on import of agro and livestock products show that there has not been any study about the impact of such imports and waiver on domestic production,” read the report.
Other waivers are for construction materials and equipment of projects run under foreign support (Rs 677.8 million) and import of vehicles for projects financed by donors (Rs 155.6 million).