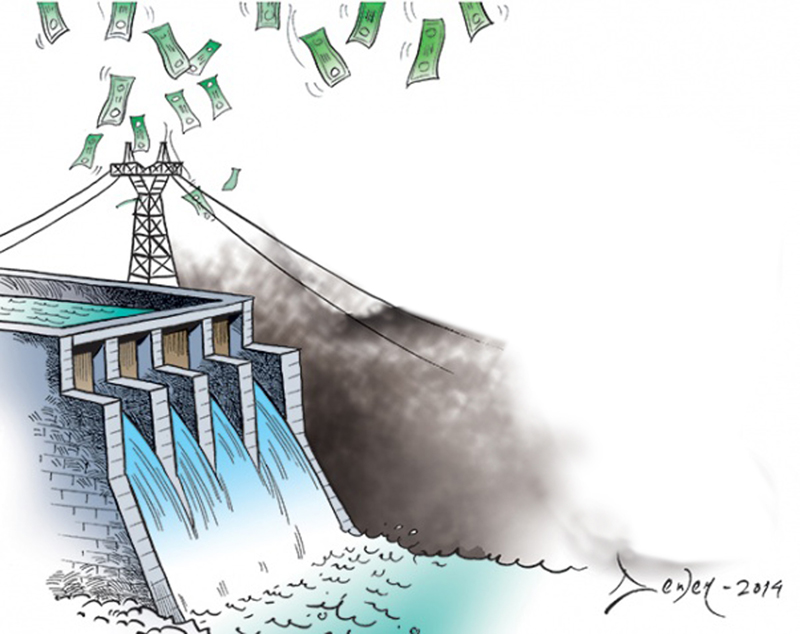 The most practical solution would be for the finance ministry to create a hedge fund to absorb Forex risk
Everyone agrees that there are lots of opportunities in Nepal’s hydropower sector. And that we cannot cash in on these opportunities effectively without foreign direct investment (FDI). But one question that often comes to my mind—and I am sure many others are also haunted by it is: Why haven’t the foreign investors in the 45 MW Bhotekoshi and 60 MW Khimti hydropower projects invested in more projects? And since they haven’t, are the opportunities in Nepal’s hydropower sector even real?

The answer is that opportunities in our hydropower sector are, no doubt, real and significant, but so are the risks. That is why perhaps the foreign investors in Khimti and Bhotekoshi showed no interest in doing another project in Nepal. And that is why not many foreign investors are coming forward to invest in hydro sector. However, it’s not that we cannot do anything about it.

We need to assure them in writing, and that can be done through the Project Development Agreement (PDA) and Power Purchase Agreement (PPA). The PPA and PDA should have clear provisions to ensure that the risks are judiciously shared between the investors and the government’s power monopoly Nepal Electricity Authority (NEA) or completely by the government.

While other risks such as political instability, state of emergency, war, etc are typically borne by the government, there is another risk that the government should bear but which it has been reluctant to do. It is the foreign exchange rate risk or the Forex risk.

To insure against this risk, foreign investors are demanding PPA in US dollars and a guarantee of around 17 percent Internal Rate of Return (IRR). Though the government has announced a policy of signing PPA in dollars for a 10-year period (sufficient time, it says, for foreign investors to repay the loans that they might have raised in US dollars), government officials are hesitating to implement this policy. NEA is putting pressure on the government not to go ahead with the ‘PPA in US dollar’ policy.

The delay is sending the country speedily down a slope that leads to more severe electricity shortages. That will weaken our negotiating power. We will soon reach a situation where we will have no option but to accept even more stringent conditions from investors. In the process, we most likely will go on increasing the import of petroleum and/or electricity, thus further damaging the situation of our balance of payments.

A better option right now is to get some high-profile foreign investors to start implementing their projects, thereby reaching a critical mass of such projects and investors, from which we can start getting a good supply of hydroelectricity. In this process, even if we end up paying a high per unit price, it will still be cheaper compared to import rates. In a nutshell, we will win the trust of foreign investors and soon reach a level where domestic projects supply a significant amount of electricity, thereby improving our negotiation power.

The government has made public several plans to end load-shedding, like generation of 10,000 MW in ten years and 25,000 MW in 20 years. But Nepal needs massive amount of FDI to realize these dreams.

To attract FDI in Nepal’s hydropower development, we need to ensure that the investors are guaranteed certain IRR. Generally, investors want payment for energy sales in the foreign currency that they bring in. It means they want to sign PPA in convertible currency, which means US dollar in our case. Such PPA will insulate the investors from fall in their projected IRR.

In this context, government officials’ reluctance to sign PPA in dollar is a matter of grave concern for foreign investors, who are otherwise keen to invest in Nepal’s hydropower development.

International financing usually goes to projects with a high level of predictability and which have proper risks mitigation structures built in. A major concern of international lenders again is Forex risk. Investment in hydropower is long-term and international lenders want to make sure that the returns are not impacted by variation in exchange rates. The currency exchange rates are based on policy decisions of a country and in Nepal, the power tariffs are decided by the NEA. So the risk of exchange rate fluctuations should reside with the NEA or the government.

In Nepal, where the country-specific risk is high and fluctuations in foreign exchange rates are routine, no foreign investor would like to take the Forex risk. So either the government should take up the burden of Forex risk all by itself or in association with the NEA.

Government taking Forex risks makes sense. After all, a power plant is ultimately owned by the government, after the expiry of the concession period. Also, the government collects revenue from the project, in the form of royalties, VAT, excise duties, etc. Furthermore, many industries and factories benefit from reliable and regular power energy. So the government can collect additional revenue from them as well.

Another option is to share the risk between the government and the NEA, or to keep all risk with the NEA alone. There is also international practice of Forex risk being borne by the off-taker alone, or the end consumers. The Forex risk in this case is shared among millions of consumers. But the amount of the Forex risk shared by individual consumers may vary depending on the foreign exchange rate at the time.

However, the most practical solution for absorbing the Forex risk is for the Ministry of Finance to create a hedge fund. The revenue received from the issuance of survey licenses, general licenses, royalty, VAT and income tax will be changed into dollar and deposited in the hedge fund. For example, if dollar is purchased now, say at the rate of Rs 95 per dollar, it can be made available to NEA for energy purchase. Even if the prevailing rate is say Rs 110, NEA will be able to procure dollar at Rs 95 per dollar. In this way the NEA is insulated from volatile foreign exchange rates.

Time has clearly come to think of these out-of-box solutions since the current FDI regimen is not working.

An under-construction bridge over a rivulet along the Dhankute Road in Dharan caved in on Thursday due to unremitting soil... Read More...

BAITADI, July 16: Seven shops were swept away by flood at Chainpur, the district headquarters of Bajhang, on Friday evening. Read More...