KATHMANDU, April 4: The Central Investigation Bureau (CIB) of Nepal Police has started investigations against 20 chief land revenue officers at Dillibazar Land Revenue Office in connection with the role they may have played in illegally transferring ownership of land belonging to Lalita Niwas, Baluwatar.

They are under investigation on charges of organized crime, forgery and use of fake government stamps and signatures.

The CIB has started investigations against all those who headed Dillibazar Land Revenue Office between 2047 BS to 2073 BS after they were found assisting the 'land mafia' transfer ownership of the 114 ropani of land originally belonging to Lalita Niwas to various individuals. The government had acquired Lalita Niwas back in 2021 BS after paying due compensation to parties concerned .

Besides the chiefs of the Land Revenue Office at Dillibazar, the CIB has also started investigations against the chiefs of the District Land Reform Office and District Survey Office serving between 2047 BS to 2073 BS. CIB officials said they have also started investigations against those who had use of the land before 2021 BS and the kin of Subarna SJB Rana, including Rukma SJB Rana, Suniti Rana, Shailaja Rana, Heman Shumser and Hatak Shumser.

Dr Shovakant Dhakal and Ram Kumar Subedi, who are considered to be the masterminds involved, have also come under investigations. Dhakal and Subedi are accused of selling the land to some businesspersons, in collusion with those who had use of the land before.

A three-member probe committee formed under former secretary Sharada Prasad Trital had also recommended initiating action against businesspersons who were able to grab the land through their connections to those in power and authority. “The government must be firm against such mafia. If those grabbing public property are not booked, what will the government do if some people stake a claim to Singha Durbar itself?” asked Trital.

CIB officials said they are currently collecting evidence. Sources at the Commission for Investigation of Abuse of Authority (CIAA) said it has already begun investigations against officials who served as chiefs of Dillibazar Land Revenue Office between 2047 BS and 2073 BS .

According to information provided by CIB, they have also demanded to study the controversial decisions taken by the cabinet headed by then Maoist leader Baburam Bhattarai on October 4, 2012 and by the Madhav Kumar Nepal cabinet in 2067 BS.

Meanwhile, former prime minister Bhattarai has shown interest in the decision taken by the government to investigate the land grab case. His cabinet had taken a decision to facilitate transfer of public land to some individuals. Taking to Twitter, Bhattarai said he always fought for good governance and integrity and wished to see independent investigations being carried out. 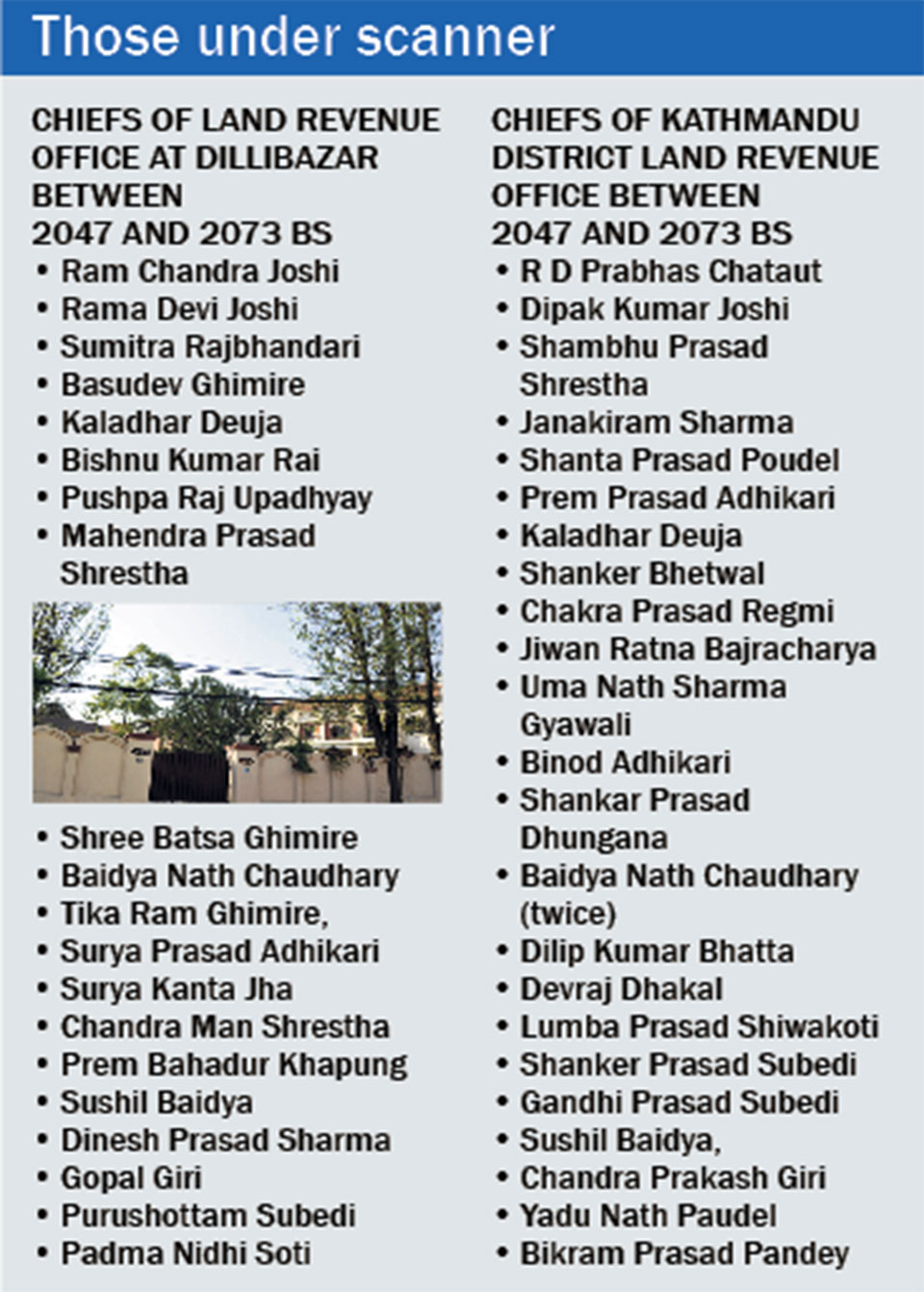 KATHMANDU, July 20: The Commission for Investigation of Abuse of Authority on Friday said that investigations into the notorious Lalita Niwas... Read More...

KATHMANDU, April 9: The government has barred transaction of Lalita Niwas land at Baluwatar on the ground that it was acquired... Read More...